First Alert at CES 2018 has introduced the Onelink Safe & Sound, its latest smoke and carbon monoxide detector for smart homes. 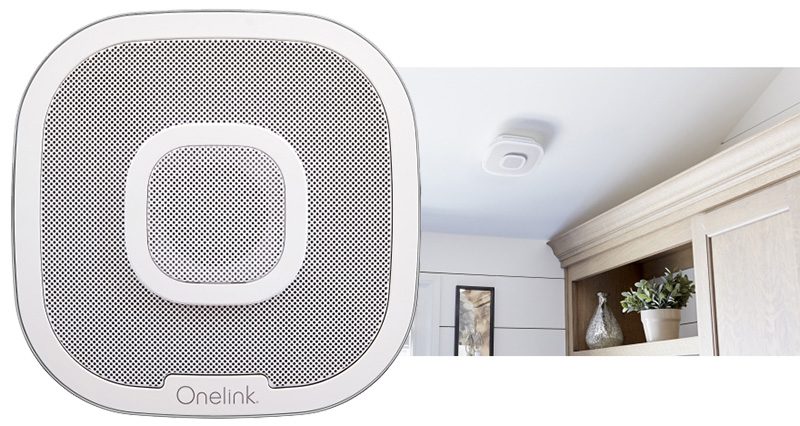 iPhone and iPad users can control the Safe & Sound with Siri or Apple's Home app thanks to HomeKit compatibility. The two-in-one detector can also be controlled with First Alert's own Onelink Home companion app.

What makes the Safe & Sound interesting is that it doubles as a ceiling-mounted virtual assistant, with built-in speakers and noice-canceling microphones and support for both Amazon Alexa and Google Assistant.

AirPlay 2 support means that a homeowner could install a few Safe & Sound smoke detectors around the house and eventually use Siri to play or pause Apple Music or other audio on a room-by-room basis.

The smoke detector is designed to be hardwired with existing receptacles, with no battery-powered version set to be available.

First Alert did not reveal pricing and availability information in its press release, but AppleInsider says the Safe & Sound is expected to ship in April for a suggested retail price of $249 in the United States.

Ok these might be a buy for me. Multiple different uses in one. Nice.
Reactions: Stargher and djlythium

If they find a way to get the costs down by about 50 bucks over time on this one they will sell a bajillion of these.

I thought iPhone home button at first glance of the device.
B

Nice! But, the price needs to come down quite a bit. Need at least one on each floor, and smoke detectors need to be replaced every 10 years. But, nice.
Reactions: PhoenixDown
J

Agree with everyone who commented so far. This has some great potential assuming it has decent sound quality, nothing special but sort of UE Boom standard!
T

Probably will be a wired only device. Don't see them getting away with all those features on battery.
C

I can't see how sound quality/volume is going to be good enough without the enclosure being quite large? Also optimum positioning for smoke detectors is not always the same as speakers...
Reactions: KrisLord
X

thespazz said:
Probably will be a wired only device. Don't see them getting away with all those features on battery.
Click to expand...

I belive being wired is a requirement for Homekit.
R

XTOTHEL said:
I belive being wired is a requirement for Homekit.
Click to expand...

I'll second that - almost certain that is correct.

I can't believe there is any buzz about these at all.

Wasn't the first HomeKit smoke/CO monitor that they released a nightmare? Terrible app, failing units, etc. The reviews online (from every retailer I can find) are absolutely terrible.

Why would one think that a product with more features to balance would be an improved experience?

I have 3 of these original models (1 wired, 2 battery). I had 4 total defective units (several replacement wired units in a row).

The app is still completely garbage.
Reactions: EximiusVir and PhoenixDown
I

First song I'd play is "Burning Down The House" by Talking Heads...
Click to expand...

I can't wait to have music play in a hallway no one hangs out in.
P

I need to buy quite a few of these so the pricing on each unit is a bit too high. I don't need all the whiz bang features except for a simple internet alert to my phone if a problem is detected.

If the sound quality is decent I’m in for five. This easily make whole house sound and keeps it up out of the way of kids.

If they would make the smoke detector part modular so that it could be slid out and replaced then it would intrigue me, but I can't see paying that much for a smart speaker that you just toss in the trash after a decade. Just seems like a lot to pay for something disposable.

This is a cool idea, but it sounds like this company hasn't managed to implement it very well in previous versions.
4

richie510 said:
I have 3 of these original models (1 wired, 2 battery). I had 4 total defective units (several replacement wired units in a row).

The app is still completely garbage.
Click to expand...

That's crucial to the success of this Product with a stable application. It only creates frustration and how do you truly appreciate the Product if the support is abysmal.

So people on "smart home"/home automation forums have often asked if there are any smoke detectors that could double as a siren/chime/speaker or similar. This seems like that. People's replies have always been that it's not legal (at least in the US) for a smoke/CO detector to contain other functions. Is that not the case? I'm guessing a brand like First Alert wouldn't get behind something they couldn't sell in the US.
E

richie510 said:
I have 3 of these original models (1 wired, 2 battery). I had 4 total defective units (several replacement wired units in a row).

The app is still completely garbage.
Click to expand...

My experience was similar to @richie510. I purchased two (battery model), had a total of three replacements. Was escalated up to the head of engineering, who actually offered to outfit me with several additional units and never followed through and communications with the tech team stopped. My devices continually lost their HomeKit pairing and communication.

I'm **extremely** skeptical of these units. The idea and premise are great in concept; however, my first-hand experience was very disappointing. I'll be waiting for others to try these out before I spend any $$ on these.

What a joke! First Alert's original HomeKit smoke detector was a piece of garbage and now they're adding a POS speaker to it? That'll be a hard pass from me, thank you.
T

Ok, so either the article is written a little awkwardly or FirstAlert is trying to pull a fast one with regards to the description of its voice command capability. I was *hoping* for a product that would give me the convenience of invoking Siri without an iPhone/iPad/Apple Watch/AirPods on me. But reading the article, it *seems* like you can only use the noise canceling microphone with Alexa and Google Home Assistant ?! I hope I'm wrong.

I just started automating my home with HomeKit (so far just a few Lutron Caseta wall switches) and it's truly awesome. With no complicated programming, I was able to set things up that I'm greeted with a lit home and one whose lights get turned off after the last person leaves. If my iPhone or iPads are nearby, I can just tell Siri what to do with the lights. The only remaining inconvenience is that at home my phone isn't always on me or it is, but pulling it out of my pocket just to give a command is too much hassle (yes, definitely a 1st-world problem When I first read about FirstAlert's new HomeKit compatibility, I thought it would address this - since you have to have a smoke detector in every room.

So does anyone know for sure what FirstAlert actually brings to the table w.r.t. voice control?