Samsung today announced the launch of its new Portable SSD T7 Touch, an SSD with 500GB, 1TB, or 2TB of storage space.

According to Samsung, the SSD T7 Touch combines a sleek and compact design with the fastest transfer speeds that are offered by the USB 3.2 Gen 2 standard. 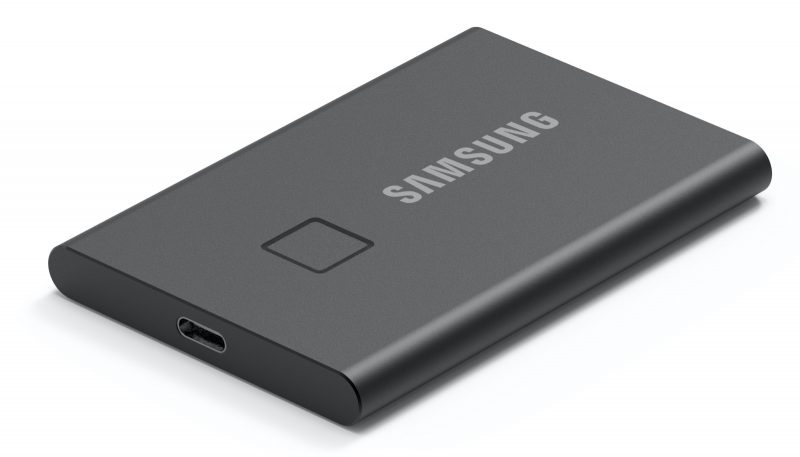 Users can expect to see read speeds up to 1,050MB/s and write speeds up to 1,000MB/s, with the SSD T7 Touch coming in at twice as fast as the T5 and 9.5 times faster than external hard drives. It is able to reach its maximum speed when used with the NVMe interface.

The T7 Touch earns its "touch" name with the inclusion of a built-in fingerprint sensor along with password protection and AES 256-bit hardware encryption. The fingerprint sensor is able to recognize up to four fingerprints, which means it can be used collaboratively while still keeping files secure. Accessing data can be done by holding a fingerprint over the drive's casing to unlock it. There's also a built-in Motion LED that lets the user see the status of the device with a glance. 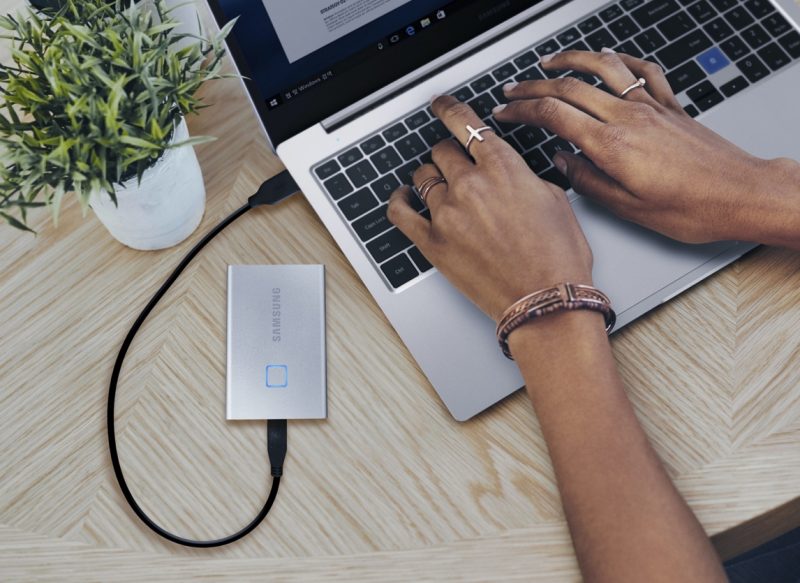 Samsung plans to begin offering the Portable SSD T7 Touch later this month. Samsung will also launch an SSD T7 in the second quarter of 2020.

Shame it was not available before the holiday season, would of been a nice me to me pressie

Oddly, my SanDisk “Extreme Pro” Portable SSD reaches those read speeds via USB-C (no NVMe required). Not sure how they do it, but it works.

outskirtsofinfinity said:
Oddly, my SanDisk “Extreme Pro” Portable SSD reaches those read speeds via USB-C (no NVMe required). Not sure how they do it, but it works.
Click to expand...

Specs I read said it does use NVMe.

I see the prices of their old SSD drives came down, you can get a 500gb one for $90 now.
Reactions: Morod
M

"Samsung will also launch an SSD T7 in the second quarter of 2020".

now if someone could make something like this to back up an iPhone/iPad. Plug iPhone/iPad into drive, authenticate with fingerprint, begin backup.

Which capacities? Will it be the "Samsung Portable SSD T7 Plus"? Hopefully, Samsung will release soon higher than 2TB capacity external portable SSD (4TB, 8TB and 16TB).
Click to expand...

That is what I am hoping to see soon from Samsung -- I would so, so LOVE a 4 TB or an 8 TB external SSD!!!! I don't care about the touch thing, I want and need higher capacities!

Weakest link in security/encryption is the Fingerprint scanner, trying to
decrypt a disk with AES 256 will take MUCH longer than trying to
hack/crack a fingerprint, me thinks 128 bit encryption would have been enough.

I never thought I'd see the day when USB is faster than SATA... but yet here we are. It makes no sense to buy a SATA drive anymore; these 1000 MBps drives would be SATA-bus limited to 550 MBps. And by time the Samsung T9 comes out, we should all collectively be on USB4... 40 Gbps.

unsynaps said:
Specs I read said it does use NVMe.
Click to expand...

Ah, you are correct - "NVMe over USB-C Technology".

A storage device with a fingerprint sensor.. what could go wrong? I do hope there is a way around it in case that sensor malfunctions while under deployment.
Reactions: CriticalVoice

I have a few T5 units and love them. These faster speeds look great! However, I was hoping for a 4TB model this year. I don’t need to upgrade my 2TB quite yet, but I was hoping to maybe pick up a 4TB model on sale by Cyber Monday later this year. It’s gonna be expensive.
Reactions: 007p
C

Nice idea, but how well does the fingerprint sensor work? Can it be tricked?

I will never consciously buy a product with Samsung branding on the outside, but thanks for breaking the ice on this, Samsung! I'll watch for your competitors to offer the same features! ?
0

Which capacities? Will it be the "Samsung Portable SSD T7 Plus"? Hopefully, Samsung will release soon higher than 2TB capacity external portable SSD (4TB, 8TB and 16TB).
Click to expand...

Yeah slightly disappointed this didn’t go up to 4tb finally.

Does it work with iOS Files?
R

I was hoping to see capacities of 1TB, 2TB, and 4TB at those prices this year.
Reactions: J.J. Sefton
I

Like others, I’m waiting for more capacity. 4TB is sorely needed. 8TB would be a dream.
Reactions: J.J. Sefton

In the meantime, I am still using a 1TB Samsung EVO TLC SATA SSD. 600MB/s. If only the NVMe shield on my computer is easy to remove. 128GB is too small.