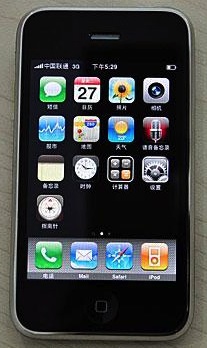 PCWorld reports that China Unicom has officially acknowledged that it is in discussions with Apple to offer a Wi-Fi capable iPhone in that country.

"I know that in the market there is hope we will offer an iPhone with Wi-Fi," said Chang Xiaobing, chairman and CEO of China Unicom, outside an event in Beijing. "We have been holding talks with Apple in this area."

Chang did not give a timetable for any release. When asked if the phone will come with WAPI, he said the phone will satisfy demands in the Chinese market.
Click to expand...

The iPhone has been offered without Wi-Fi since its launch in China last October due to restrictions imposed by the Chinese government. Those restrictions were lifted several months prior to the iPhone's introduction, but Apple and China Unicom continued with their plans to introduce models lacking Wi-Fi connectivity. At the time of the iPhone launch there, China Unicom had expressed hope that Wi-Fi capable models could be introduced by the end of the year, but that did not come to fruition. A report surfaced in late January claiming that Foxconn had already begun producing Wi-Fi iPhones for the Chinese market, but it appears that that may not yet be the case.

Wi-Fi phones in China are required to support the WLAN Authentication and Privacy Infrastructure (WAPI) security standard, and the iPhone would almost certainly have to adopt that technology in order to add Wi-Fi capabilities.

um, the ipod 3rd. gen is already a wifi phone. All you have to do is use the headphones that come with a iphone with the mic or a compatable headphone/mic combo. Skype (or your fav wifi pfone service) away!!
Comment
L

richmonddjs said:
um, the ipod 3rd. gen is already a wifi phone. All you have to do is use the headphones that come with a iphone with the mic or a compatable headphone/mic combo. Skype (or your fav wifi pfone service) away!!
Click to expand...

I think you misunderstand - the iPhone sold in China doesn't have WiFi at all. I'm assuming the iPod Touch also isn't sold in China, since it wouldn't support WAPI either.

lowbatteries said:
I think you misunderstand - the iPhone sold in China doesn't have WiFi at all. I'm assuming the iPod Touch also isn't sold in China, since it wouldn't support WAPI either.

Edit: nevermind what I just said. It appears that when trying to click on the "Buy" button that it gives a message saying to call a phone number for inquirees.
Comment
T

Edit: nevermind what I just said. It appears that when trying to click on the "Buy" button that it gives a message saying to call a phone number for inquirees.
Click to expand...

Oh great communist propaganda wifi standard. I wonder if it had a back door from its inception. The Gov. is know for its paranoia.
Comment

Edit: nevermind what I just said. It appears that when trying to click on the "Buy" button that it gives a message saying to call a phone number for inquirees.
Click to expand...

What the phone number too? Local Secrete Service of China
Comment
C

Apple does sell iPod Touch with WiFi in China, just not in online store but in the physical Apple Store and its authorized sellers. Don't know what's the problem with the WiFi on iPhone though.
Comment
X

The reason u can only buy an iphone without wifi is that there is a conflict when u under a wifi zone instead of using 3g or gprs in China.

When u face those smuggling iphonespYes, there have a lot, cus no one can w8 during the long term neotiations between Apple and China unicom), the net system will swich to 3g or gprs automaticly after u leave wifi zone ....lol...... and u probally donno u still online, and it will cost u almost $30/mb without binding contract.

I gona say it is a genus plan, after all, 3g selfphones like iphone are designed for free-net-surfing,. However, it is not conveniet for such activities in China base on the circumstances of high charges from those mobile companies. It also appears to me we could easily buy an itouch from "formal" way in China cuz there is no need to bind anything for mobile operations.
Comment
C

haha. I think its time for me to make my first post since this issue is exactly what i am facing. I live in china, and a few weeks ago someone give me an iphone 3gs as a new year gift. I sold it away. coz it got no wifi. you cant jail break it. the only connection you can use is either gsm or 3g. The reason for that is the chinese government itself developed a unique wifi protocol called wapi. To impulse this protocol, the government requires all cell phones that has wifi capability must be compatible with wapi. And if you cant, you out. This is the case for iphone. Due to it failed to follow this requirement, the wifi module was literally removed from the mother board. However, the ipod touch remains untackled.

ps, there are rumous about a up-coming full version iphone,which has the wift module, is due to release shortly.

ps(again), To the post before me, well, its not realy about the price for the data plan. Imo, its more like the government wants to advocate its wapi wifi standard even though its not really that good.
Comment
C

Wow, China Unicom's network is amazing.
I'm in Beijing and I've been inside of fallout shelters and deep tunnels and those are the only times I've ever lost 3g signal.
I always have full bar, and the 3G is always perfect. I assumed that it was going to be crap but it wasn't. I read about all the problems in the US with their 3G but it's like WTF it's perfect in Beijing. I can be on a train to the next city in the middle of farmland and still have a good strong signal.

I don't think anyone would buy a phone from there though. The whole county would buy a used phone first before one in a store lol.
I pay like $14 a month and get 300MB a month for 3G which is usually enough. It's super cheap here I wish it was like that in the US.

The ipods are wifi, it wouldn't make sense to have it not be wifi.

Everything in the apple store is 2x overpriced. Literally. SO then you go to a different market and get the one imported from the US at the same US price. It's not a problem. We have iPads over here now, they're everywhere.

Actually I've never even seen one of these phones without WiFi, who really cares if it dosen't have wifi, I mean the only person who would be buying it in the store, would be the super rich dudes, forget them.

its true the chinese one doesnt have wifi, but everyone buys the Hong Kong Import which does have wifi.
Comment

I tried wardriving in China already; I didn't get many access points Yes their cellular networks are amazing; they have cell phone repeaters mounted in tunnels, subways trains probably in the babies too p)
Comment
I

Hey, this is a little off the subject...I live in Beijing, too, and have a data plan with China Mobile. I have the 3G capability enabled on my phone, but I never get 3G. Only the Edge network. Does anyone know what I'm doing wrong?
My phone is a US iPhone 3gs jb'd/unlocked with Blackra1n/Blacksn0w.
Thanks.
Comment
L