Under normal and lightweight web browsing, Google Chrome uses 10x more RAM than Safari on macOS Big Sur, according to a test conducted by Flotato creator Morten Just (via iMore). 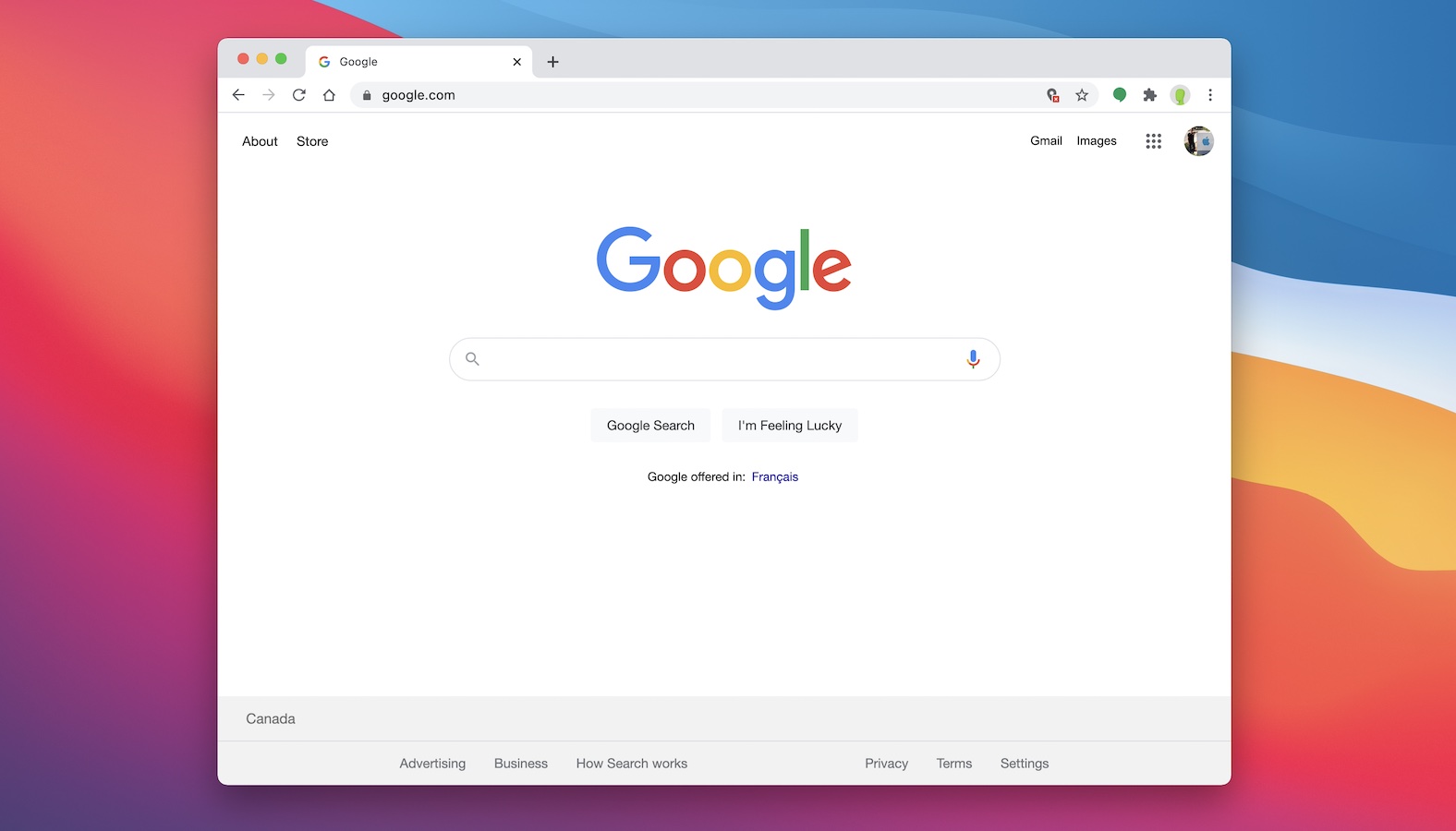 In a blog post, Just outlines that he put both browsers to the test in two scenarios on the latest version of macOS. The first test was conducted on a virtual machine, and the second on a 2019 16-inch MacBook Pro with 32GB of RAM. In the first round of testing, Just simulated a typical browsing pattern of opening Twitter, scrolling around, and then opening a new tab with Gmail and composing an email.

Under that test, Just found that Chrome reached 1GB of RAM usage, while Safari used only 80MB of RAM. The two-tab test was only the start, however. 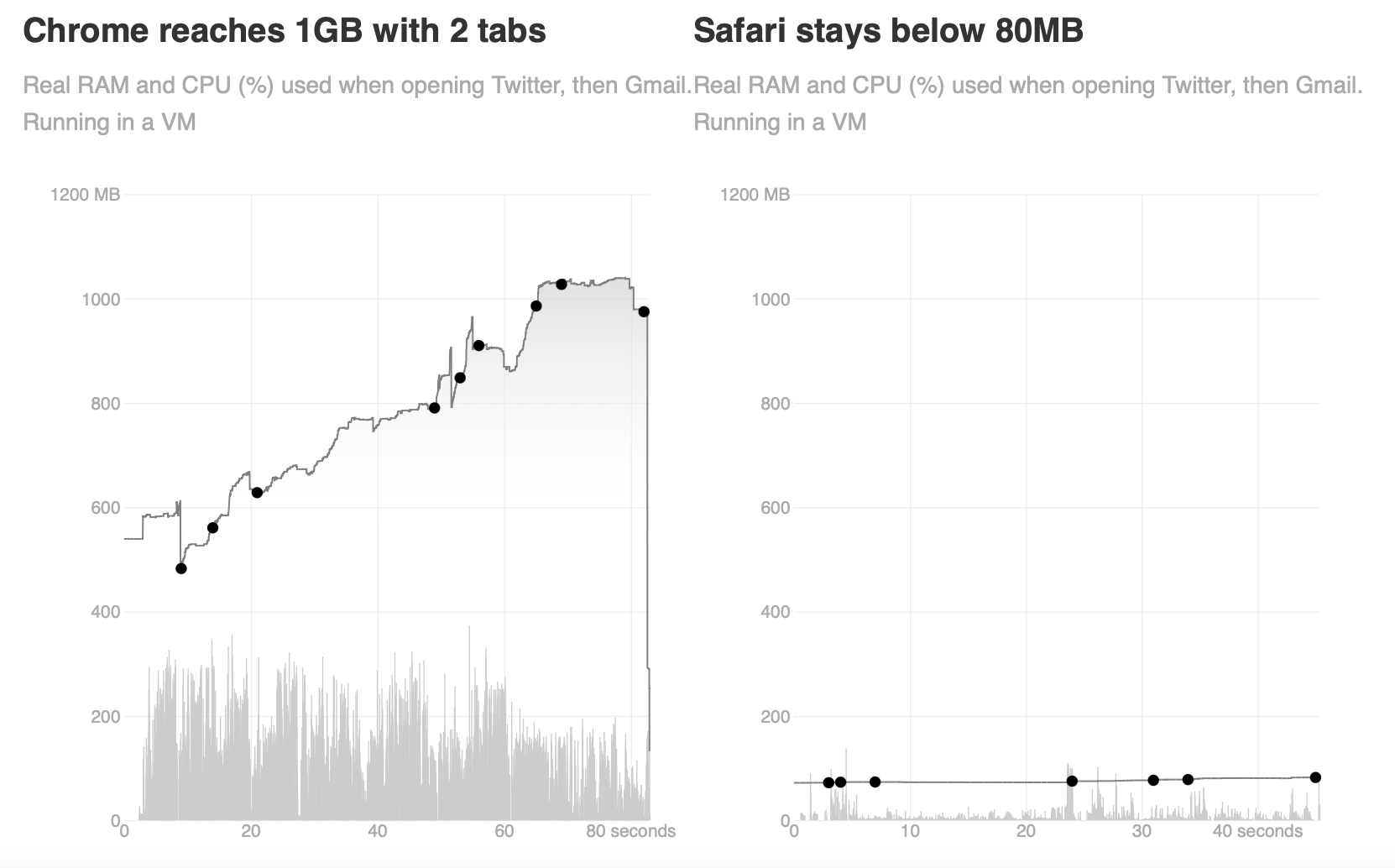 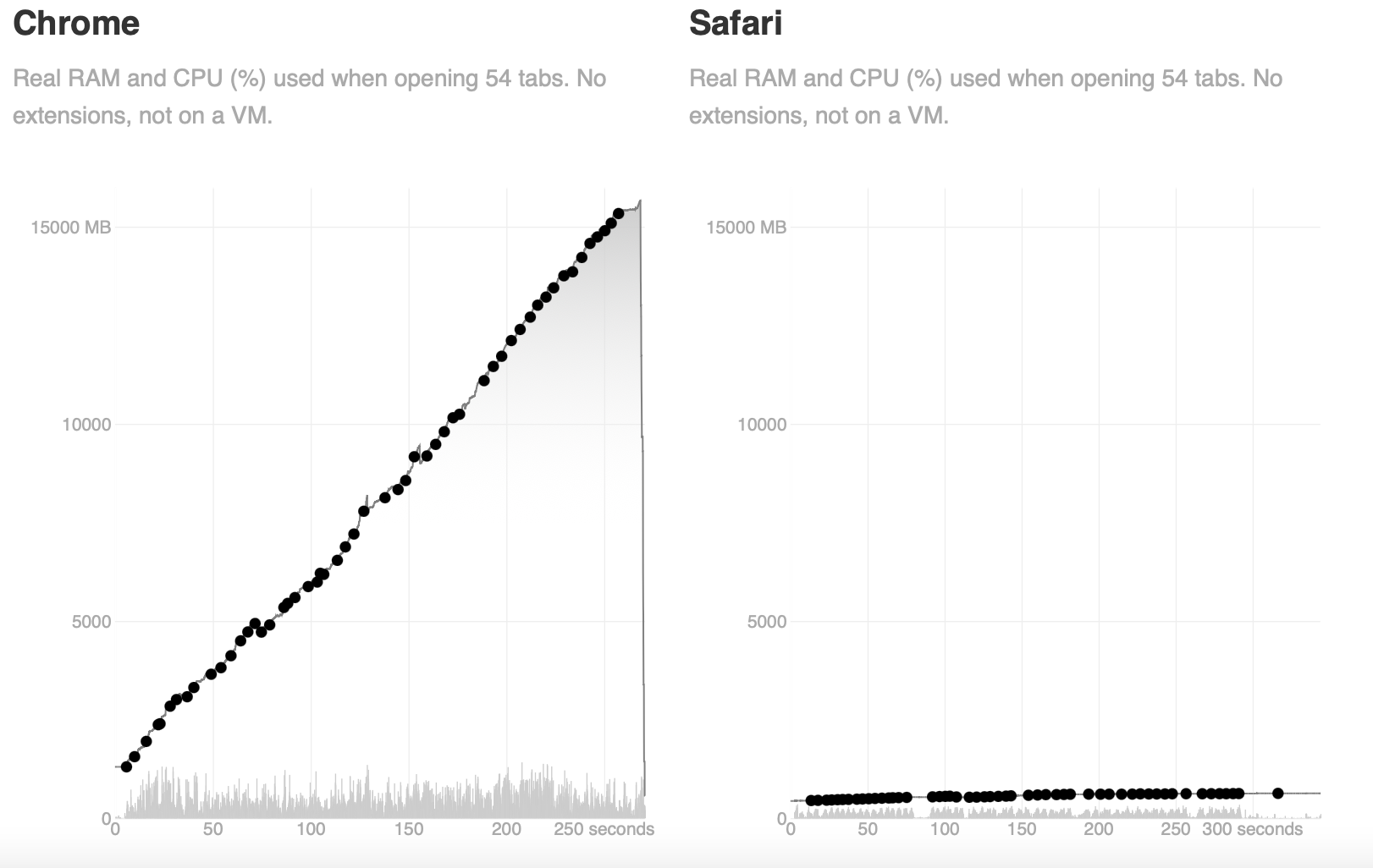 While the results are stark, Just does say that Google Chrome is likely "going out of its way to manage its memory usage across tabs," in efforts to keep the current tab "fast and responsive." In his tests, Just finds that his own application, Flotato, a lightweight alternative to Chrome that creates apps based on webpages, used significantly less RAM than both Safari and Chrome.

Chrome is known to being a memory hog on Mac and Windows computers, an issue Google has recently attempted to solve.

With macOS Big Sur, Safari received significant updates that saw it further outpace Chrome. Apple says that Safari on macOS Big Sur is "50% faster on average at loading frequently visited websites than Chrome," and that Safari provides up to one and a half hours longer of streaming video, and up to one hour longer normal web browsing on a single charge, compared to Chrome and Firefox.

Update: There are comments suggesting that these measurements may not be accurate. We'll provide further updates as more information comes out.

Yes, keeping track on everything the user does takes a toll
Reactions: TropN, B60boy, richhh and 91 others
G

I just can't get used to Safari's UI. I keep going back to Chrome. The closest alternative to Chrome for me is Brave.
Reactions: TropN, Okasian, rafark and 26 others

Well, it is running ChromeOS on your Mac!
Reactions: apparatchik, Mike_Trivisonno, adib and 4 others

Chrome: the browser you briefly use when poorly coded websites don’t like Safari.
Reactions: Amigaman, TropN, FCX and 110 others

ghanwani said:
I just can't get used to Safari's UI. I keep going back to Chrome. The closest alternative to Chrome for me is Brave.
Click to expand...

And your loyalty is helping Google make a bigger file on you that can be sold later on. Google thanks you for your support.
Reactions: planteater, mabhatter, TheDemogordon and 59 others

djcerla said:
Chrome: the browser you briefly use when poorly coded websites don’t like Safari.
Click to expand...

More accurately, in my experience: chrome - the browser you fire up briefly when tech support suggests you give it a shot just because they don’t entirely trust that the problem isn’t your browser.
Reactions: MobiusStrip, Crow T Robot, MrFootery and 30 others
J

I mean, RAM was made to be used. If using more free RAM means you can switch between tabs and they will all keep doing its thing without problems im ok with it
Reactions: FCX, planteater, rafark and 30 others

I hate Chrome. I don't understand the wide adaption of this spyware.
Reactions: planteater, Okasian, SnakeEater1993 and 36 others
P

Probably one of the reasons that Chrome is using so much RAM is that it's continually tattling on your privacy by continually going back to Google servers. So little RAM and so much to surveil.

When I installed gigabit internet, I couldn't understand why Speedtest was only showing 279 down. Then the ISP said, try doing Speedtest on Safari instead of Chrome. Sure 'nuff, the speed was 800+ down! That difference of 500+ bandwidth is going somewhere and it's got to be communication between every website, every bookmark, every favicon, every cookie and every bit of cache on your computer.
Reactions: richhh, MrFootery, Okasian and 17 others

Safari has been the smoothest experience for my browsing needs. Much more responsive than other browsers I've tried. It may not have every feature, but there's no better choice for me on my Mac. I use Chrome on my Windows PC and feel like it's more refined on Windows. I never felt the level of refinement using Chrome on my Mac. This extreme variance between the two apps isn't shocking after using both of them.
Reactions: TMax, Mike_Trivisonno, AppleFan1998 and 7 others

Chrome is only best to be used on Google Chrome books. It’s simple as that.

Chrome has always been RAM hungry, with 5 tabs open in Windows 10 it's using about 1.2GB, seems it uses about 100MB per tab, Chrome is in serious need of optimization. I use 64GB RAM so I'm not that fussed ?
Reactions: Mike_Trivisonno, Populus, OGD114 and 3 others
M

jdavid_rp said:
I mean, RAM was made to be used. If using more free RAM means you can switch between tabs and they will all keep doing its thing without problems im ok with it
Click to expand...

For the OS to manage, not for a single app to eat up and not giving it back on demand.

If you open up a new app like Final Cut, macOS can compress memory that it knows is not being used and free up some for the new app to use right away.

You can't do that easily if the apps doesn't free up the resources or mark memory to free up by the OS. In other words, if Chrome uses up 5GB of 8GB and none of it is compressible or freeable at any time, macOS can only deal with 3GB of system/ freeable app memory to compress, move around, etc before it starts paging to disk.

M1 Macs are already paging badly to disk because they don't have enough memory and people are reporting on Twitter that their SSDs already hit 200TB of data written to disk.
Reactions: ignatius345, apparatchik, elmateo487 and 8 others
L

There seems to be an error in how they measured Safari's RAM usage: https://news.ycombinator.com/item?id=26179817
Reactions: can$rules, Agit21, Toutou and 16 others

Ok. I’m still using Chrome. Sorry but the way safari manages extensions and handles downloads, among other things, just creates a less enjoyable experience for me compared to Chrome.
Reactions: slamtennis, b656, Okasian and 14 others

I find it hilarious that Google Chrome will have a new update now that will bring performance improvements with less RAM usage.
Last edited: Feb 20, 2021
Reactions: Mike_Trivisonno
N

It's a flawed test. This shouldn't have even passed the smell test

(Disclaimer: V8 dev)
This post is unfortunately nonsense, because it's making a fundamental measurement error: not including renderer processes for Safari, and only measuring the browser process (which should be expected to be roughly O(1) memory in the number of tabs).

I'm somewhat disappointed that the author, or half the comments on the post, didn't question these _wildly_ different results though...
Click to expand...

I'm happy with Safari for 98% of my browsing needs ... Chrome for the other 2%
This RAM usage is ridiculous though ...
Reactions: MacClueless, Mike_Trivisonno, ApeBot and 2 others

Wasnt there an article not so long ago saying the opposite on M1 Macs?
Reactions: Mike_Trivisonno and Romeo_Nightfall

I don't like chrome at all.
Reactions: Mike_Trivisonno, George Dawes, djgamble and 5 others

That post is total nonsense. Yes, Safari itself always uses about 100MB of RAM, but it creates a separate process for each tab, which for me uses close to 1GB for the current MacRumors tab for example. Chrome spawns a whole bunch of subprocesses which taken together have a roughly similar memory footprint (actually slightly lower, at least on my setup).
Reactions: can$rules, attila, Okasian and 22 others
You must log in or register to reply here.
Share:
Facebook Twitter Reddit Email Share Link
Register on MacRumors! This sidebar will go away, and you'll see fewer ads.
Sign Up
Top Bottom