Is anyone else experiencing this com.apple.IconServices: Failed to write file... error?

This occurs at random times and when it does, my CPU load spikes and my machine becomes extremely unstable (sometimes the screen blinks and jumps me to my login screen).

The only way to resolve this issue is to reboot.

Attached is the Console view and a detailed view of the message. As you can tell by the screenshots, even though it failed it continually keeps trying, 10 times a second.

Jonsuh,
I'm seeing thousands of these errors a minute. In fact, the screenshot I've attached shows 4,000 of them in only 17 seconds! Have you made any progress determining the cause?

My log error appears to be very similar to yours: 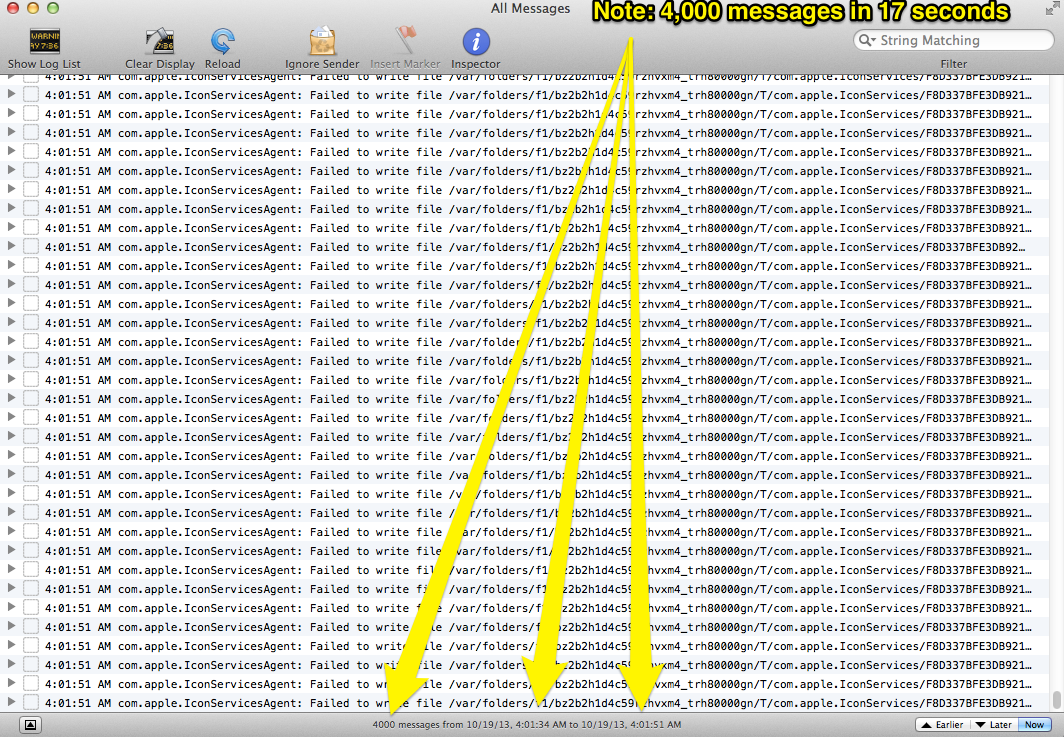 Did you try rebooting to see if the messages stopped?
Comment
T

maflynn said:
Did you try rebooting to see if the messages stopped?
Click to expand...

I have exactly the same problem, the com.apple.IconServicesAgent process goes over 200% CPU and blocks Finder operations.
But there is no need to reboot - after killing the process with the Activity Monitor things go back to normal.
Comment
P

This has been driving me crazy for a day and a half! My CPU was spiked from com.apple.IconServicesAgent, icons wouldn't appear in the Finder, and eventually, all the icons disappeared from the dock.

I tried Ptsash's previously mentioned folder creation solution, which didn't work for me. I also tried using the latest version of Cocktail to repair permissions and run its built in scripts to clear all the caches, restarted a few times, no change.

Finally, I tried rebooting in Safe Mode (hold the "Shift" key while starting up - don't let go until after the Apple logo appears). After waiting 20 minutes for it to boot up in Safe Mode, I was able to login and see my Finder and dock icons. After rebooting again (normally), everything is working fine - icons are appearing and CPU usage has been nice and low for a half hour.

My solution turned out to be to increase the disk quota for the user which the process belonged to.
In the system.log, you'll see the PID of the process generating the errors: