Feral today announced that the Company of Heroes 2: Master Collection is now available on the Mac App Store.

Originally developed by Relic Entertainment and generally regarded as the definitive version of the critically acclaimed real-time strategy game, the Master Collection on Mac utilizes an implementation of Apple's Metal that brings a leap forward in performance and graphics, according to Feral. 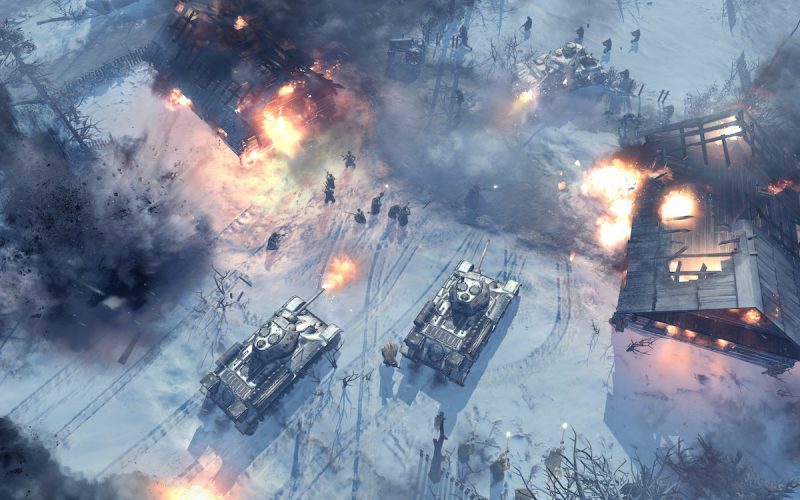 Company of Heroes 2: Master Collection challenges players to direct their troops through fast-paced real-time battles in the brutal fight to turn the tide of World War II. From the desperate defense of Stalingrad to victory in Berlin, they must defeat a tenacious enemy through the deadly cold of the Russian winter and the fast-moving battlegrounds of the western front.
Click to expand...

The Company of Heroes 2: Master Collection comes with the base game, its entire catalogue of DLC, and all three expansions, including The Western Front Armies, Ardennes Assault, and The British Forces.

The Western Front Armies changes the course of multiplayer warfare by bringing U.S. Forces and the German Oberkommando West to Online and Skirmish mode. Meanwhile Ardennes Assault puts players in command of U.S. Forces in a single-player campaign against the Germany army. The British Forces challenges players adds a new multiplayer army and a new set of maps ranging from northwest Europe to Nazi Germany.

Got it for a 2 $ on Humble bundle steam strategy bundle.
Reactions: adib and Sandstorm
Comment
R

What a scam :/
You can find the same game, in master collection edition for 25$...

Will it sync with Steam so all my bootcamp PC achievements and unlocks are automatically in this version?

Actually - do I have to buy this again on Steam for the Mac version?

Edit - I just opened Steam on the Mac and there is CoH2 ready to install so at least I don't need to buy it again. Now just a big download to go and I will see how the Mac version compares. It will be interesting as it is the exact same machine I will be playing on.
Last edited: Oct 19, 2018
Reactions: star-affinity
Comment

rurza said:
What a scam :/
You can find the same game, in master collection edition for 25$...

Great to see more games using Metal come out. I bet the game will still run better in Windows on the same hardware, but we should be able to get a lot closer to the Windows version at least.
Reactions: Sandstorm and 69Mustang
Comment

Speaking of Steam, anybody know what the deal is with that Steam Link thing for Apple TV? The idea I got was that it would let you stream Steam games from a Mac to the Apple TV -- is that right? I've got a decent little collection of games on Steam and it sure would be fun to play them on a 100" projector screen
Comment
You must log in or register to reply here.
Share:
Facebook Twitter Reddit Email Share Link
Register on MacRumors! This sidebar will go away, and you'll see fewer ads.
Sign Up
Top Bottom