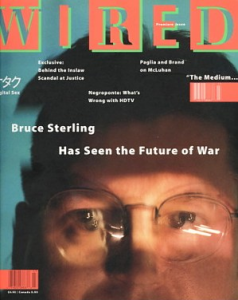 Last year, magazine publisher Condé Nast began offering a number of its iconic titles as iPad apps with in-app subscriptions. Now, Condé has made the first issue of Wired magazine -- issue 1.1 from 1993 -- available within the Wired Magazine iPad app (App Store) for free.

The retrospective includes a 12,000-word oral history and archival images from the original Wired editorial team.

WIRED today announced the reissue of its iconic inaugural issue on the iPad as a free download on June 1. Launched nearly twenty years ago in January 1993, the premiere issue featured science fiction author Bruce Sterling on the cover and quickly became a sought-after collectible. Re-envisioned using the latest publishing tools, the iPad version (1.1.1) is a page for page replica upgraded with annotations and perspectives on how it all happened and what became of the stories and subjects within from the founders, editors, and contributors involved.

"As far as we were concerned, making this free for all of the readers who have supported WIRED over the past 20 years was the only option," says Howard Mittman, VP & publisher, WIRED. "We knew we wanted to revisit the first issue for our twentieth anniversary, and thanks to Adobe, we were able to make that happen. The only thing more exciting than looking back at that issue and seeing how relevant it is today is being able to share it with the WIRED community."
Click to expand...

WIRED Magazine is available as a free download for the iPad. Issue 1.1 is available via in-app download. [Direct Link]

I have every single issue of Wired published (US editions), from 1.1 until today.

It'd be great if they'd digitize the entire run, but that would be close to 200 issues. Not likely to happen.
Comment
B

clayj said:
I have every single issue of Wired published (US editions), from 1.1 until today.

It'd be great if they'd digitize the entire run, but that would be close to 200 issues. Not likely to happen.
Click to expand...

they likely will at some point, just don't expect it to be done by tomorrow .
Comment
S

Anybody else see the irony in "Wired" magazine making issues available on a wireless device?
Comment

sluiced said:
Anybody else see the irony in "Wired" magazine making issues available on a wireless device?
Click to expand...

Downloading now, I love old magazines, I still page through old issues of PCWorld for memories.

I have some old Mac magz, the covers are just great with all those old products. I also love the old ads in those old issues.
Comment

I wonder if the copy of Wired 1:1 that's in my Mom's basement in a box is covered with mildew, or in good shape...
Comment
B

Ahhh 1.3GB e-magazines. What well produced, though out and efficient pipeline you have there Adobe.

Nothing says incompetence like making a magazine, each page a single massive image - times two to support retina and non-retina screens.

Hard to believe the geniuses at Adobe are the same ones who came up with PDF.
Comment

sluiced said:
Anybody else see the irony in "Wired" magazine making issues available on a wireless device?
Click to expand...

Not nearly the irony of the so-named magazine being issued on dead tree carcasses for nigh unto 200 issues.
Comment
C

benpatient said:
Looks like it must be direct scans with minimal resampling or optimization...1.3GB?
Click to expand...

I doubt if any scanning was involved.

Somebody either fired up an old copy of PageMaker or QuarkXPress and exported to PDF, or maybe Conde Nast has some in-house utilities to open up an old project file and translate it to something exportable for today's usage.

After all, it is likely that this content is either in an SGML or PostScript readable format.

I wouldn't be surprised if Conde Nast has periodically converted old files to something a bit more universally proven, like converting PhotoCD files to TIFF images.

Let's not forget that Wired magazine has had to reinvent itself numerous times. Wags were already calling it "Tired" in the late Nineties. It was really only a cutting edge technology magazine for about five years.
Comment
R

No, no , no. What Apple will do is buy Facebook. Tim Cook would move to COO and Mark Z would focus on products as the 21 st century heir to Steve Jobs. Together Apple-Facebook will be unbeatable. Mark Z is the new Steve Jobs ( whether starting in a garage or dorm room). Apple know this as Tim Cook is not a creative person - he is a dour, intelligent businessman. Apple need more than Ive who is full of self importance and cant do what Mark Z can.
Comment

olowott said:
That is one Big Issue
Click to expand...

Their magazines used to be nearly a half inch thick, and used a larger format too. If it's the entire mag, with adverts, it's going to be huge.
Comment
P

clayj said:
I have every single issue of Wired published (US editions), from 1.1 until today.

It'd be great if they'd digitize the entire run, but that would be close to 200 issues. Not likely to happen.
Click to expand...

Don't see why not: Model Railroader and Trains have recently released every magazine they ever published (Thats 75 years worth) on digits a couple of years ago. Even made them searchable.