Consumer Reports has conducted some early audio testing of the HomePod, and while the full evaluation isn't yet finished, the site believes that both the $400 Google Home Max and the $200 Sonos One sound better than Apple's new $349 smart speaker.

The HomePod received a "Very Good" sound quality rating, as did the Sonos One and the Google Home Max, but the latter two speakers also received higher overall sound quality scores.


Consumer Reports says that its speaker tests are conducted in a dedicated listening room, with experienced testers who compare each model with "high-quality reference speakers." In the case of the HomePod, testers found a few issues.

The bass was "boomy and overemphasized," while midrange tones were "somewhat hazy," and treble sounds were "underemphasized." Overall, Consumer Reports found the HomePod's sound to be "a bit muddy" when played next to the Sonos One and the Google Home Max.

The HomePod will serve many music fans well, but CR testers did hear some flaws. The HomePod's bass was a bit boomy and overemphasized. And the midrange tones were somewhat hazy, meaning that some of the nuance in vocals, guitars, and horns was lost: These elements of the music couldn't be heard as distinctly as in more highly rated speakers. Treble sounds, like cymbals, were underemphasized. But the HomePod played reasonably loudly in a midsized room.
Click to expand...

All three smart speakers "fall significantly short" of other wireless speakers Consumer Reports has tested, like the Edifier S1000DB, priced at $350. 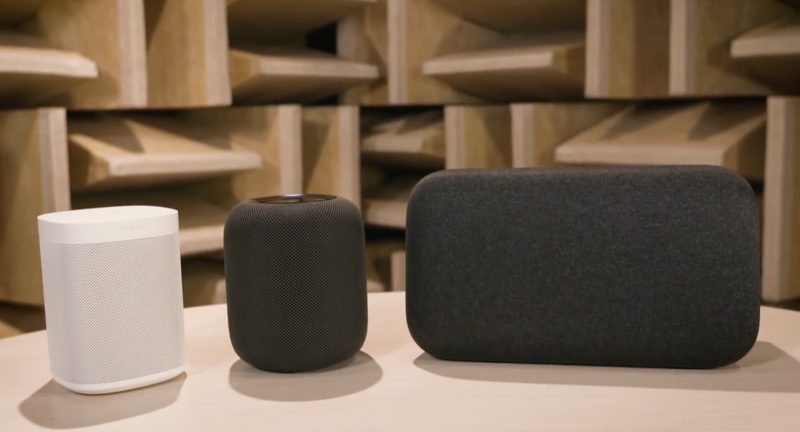 The HomePod's sound has been highly praised both by new HomePod owners and by media sites that tested the device ahead of its release. While Consumer Reports doesn't believe the HomePod outshines the Google Home Max and the Sonos One, other reviews have disagreed, including an extensive, in-depth review published by a self-professed audiophile earlier this morning.

“Sounds better” is always subjective. Only the user can decide what product sounds best to them. None the less, the HomePod is a huge contender in the audio department and the reviews for the audio have been substantially positive throughout.
Last edited: Feb 12, 2018
Reactions: Krafty, LordVic, HopefulHumanist and 35 others

Breaking: everyone has a different opinion.
Reactions: Krafty, iwan073, ascender and 66 others
M

"Consumer Reports doesn't have any idea what it's talking about." - Every response in this thread
Reactions: Krafty, flowave, accrama and 94 others

Better than KEF but not as good as Google or Sonos.

What your ears hear and what you like is very subjective. It sounds like it's good enough that most couldn't hear a difference beyond what their listening preference is.
Reactions: MacsRuleOthersDrool, MrUNIMOG, douglasf13 and 13 others

Haters gonna hate as per usual
Reactions: MacsRuleOthersDrool, BvizioN, Starship67 and 2 others

Is the 2 for $349 Sonos offer still on?
Reactions: Fried Chicken, matthijst, dvhoosier and 10 others

Literally every review I’ve seen has been super positive. And somehow, anti Apple consumer reports has nothing but bad comments. Shocker.
Reactions: SpenceMan01, Wowereit, philryan and 50 others
W

Boy CR is not afraid to look stupid. Good for them.
Reactions: AbblePC, HopefulHumanist, MacsRuleOthersDrool and 27 others

I don't even like the Homepod but even I think this report is inaccurate. All the other reviews show clearly that the Homepod sounds better technically and perceptually.
Reactions: Wowereit, philryan, HopefulHumanist and 25 others

What are they smoking ?
Reactions: MacsRuleOthersDrool, philosoraptor1, valleian and 7 others

Is CR even that relevant anymore? Honestly if I’m looking for product reviews, I either go directly to industry reviewers, YouTube, or amazon. CR Has not crossed my mind when I’m looking for reviews since the mid-90s.
Reactions: Wowereit, AbblePC, HopefulHumanist and 29 others

This conflicts with basically every other opinion of the HomePod thus far.
Reactions: Wowereit, philryan, MacsRuleOthersDrool and 35 others

Their clear Anti Apple Bias is on clear display.
HomePod does distort audio at any volume.
The Google (we sell your info) speaker does.
Reactions: MacsRuleOthersDrool, MagMan1979, Beck Show and 3 others

The sad thing is a lot of people will not even try the product because they don't want to think for themselves, and prefer CR do their thinking for them.
Reactions: MacsRuleOthersDrool, MrUNIMOG, bmot and 8 others

And they still charge a hefty fee for their "unbiased" content.

They were once a power house go to worth a subscription. I agree, they are irrelevant now.
Reactions: MacsRuleOthersDrool, ohio.emt, MrUNIMOG and 10 others

Or maybe... They're right? Is it just always assumed that the Apple version of a product is hands-down better and nobody can say otherwise?
Reactions: EddieRingle, RuralJuror, Fried Chicken and 61 others

MICHAELSD said:
This conflicts with basically every other opinion of the HomePod thus far.
Click to expand...

That should not even matter. Everyone can have their opinion. But what CR is telling is basically a lie. The G speaker distorts at high volumes. The HomePod does not.
Reactions: MacsRuleOthersDrool, philosoraptor1, MrUNIMOG and 13 others

Don't let your fanatism go that far. It's great to have different opinions.
Reactions: EddieRingle, chukronos, sidewinder3000 and 21 others

Of all the criticism I read of the HomePod, both before and after the release, sound quality was not one of them. Nobody seriously doubted this thing wasn't going to sound awesome for its size.

However, sound is physics, and other than having massive powerful amps and big speakers, the only way around the physical limitation of having a small speaker is by faking it with DSP and other tricks. The same tricks used by Sonos and everybody else.

I think the HomePod haters mainly hate the pickle Apple is putting them in, as fans. On one hand, they are Apply fans and want to own Apple hardware; if Apple makes a speaker they want that speaker. On the other hand, Apple has never been good with cloud or subscription services, so many many Apple fans subscribe to non-Apple services. By making the speaker only work with Apple's own music subscription service, they are forcing fans of Apple to choose between having Apple hardware or using the service they have been using and like.

Locking down the HomePod away from any third party services isn't just the walled-garden approach - it downright hostile. Imagine if tvOS only worked with iTunes and Apple refused to allow Netflix or Hulu, or if iOS only worked with Apple mail and refused to allow Gmail or Exchange. The same anger would come from Apple fans being forced to choose.
Reactions: RuralJuror, Dimer, raybo and 29 others

FrozenInferno said:
Or maybe... They're right? Is it just always assumed that the Apple version of a product is hands-down better and nobody can say otherwise?
Click to expand...

Nope ,everyone can have their opinion. But CR is basically lying.
Reactions: HopefulHumanist, MacsRuleOthersDrool, StumpJumper and 7 others