Consumers Most Interested in Apple Products Because of Existing Ecosystem, Ease of Use

Reuters conducted interviews with more than 70 shoppers in major cities around the world to find out which consumer electronics items they are most interested in this holiday season.

Reporters discovered that while Apple stores were bustling with shoppers, Microsoft's pop-up stores in the U.S. were much less crowded. Additionally, though Samsung has spent big bucks in recent months pushing its products (and knocking on Apple's), only in Singapore and Bangalore did consumers have Samsung at the top of their list. 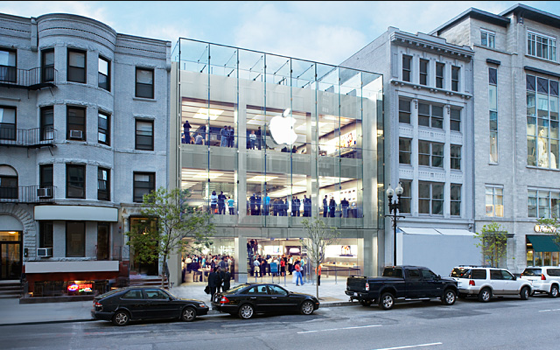 Loyalty to Apple's compelling orchard of products seemed to be a first line of defense for the Cupertino, California, company as shoppers in Europe, Asia and the United States weighed the pros and cons of switching to rival offerings.

Customers cited existing iTunes music and video libraries plus the traditional Apple virtues of simplicity and ease of use as reasons to stick with the iPhone and the iPad.

"I just taught my Persian grandmother how to use her new iPhone. She's 77 and speaks no English," said Soheil Arzang, a 27-year-old law student in Palo Alto, California. "With a Windows PC there are so many buttons, it's confusing. I converted my parents officially to Apple iPhones, Macs and iPads."
Click to expand...

Earlier this week, a questionable Reuters article compared Apple's lock-in ecosystem with a "tax" that users are required to pay to have access to their previously purchased apps and content. Aside from the misuse of the word "tax", that piece was correct in that Apple has locked in its users.

Today's article quotes several users on Android tablets and phones, with one saying "although they are cheaper, you have to re-buy everything." Another said "Apple's got me in now." In fact, Samsung's chief strategy officer is an Apple user for the exact same reasons.

Other points of interest include heavy demand for the iPad and the iPad mini, Apple Stores surveyed had 9 visitors for every 1 visit to a comparable Microsoft store, and in-store purchases of the Amazon Kindle was virtually nonexistent -- likely because of Amazon's online-only focus.

Article Link: Consumers Most Interested in Apple Products Because of Existing Ecosystem, Ease of Use

so you ask people at apple stores what brand they're most excited about?!

Guess what product most people are excited about at a donut shop? Yes a donus!
Comment

Reuters: describing today what most figured out several years ago.
Comment

It most certainly is a tax, not in the literal sense but a mandatory premium you pay now that you are in the ecosystem because it is very tough to leave. And it is due to Apple not making it super easy for its products to work with others. Like why cant I delete Apple's Map app? This smells like MSFT / IE back in the day and it will all come to roost soon. We are starting to see signs of it.
Comment

Radio said:
so you ask people at apple stores what brand they're most excited about?!

Guess what product most people are excited about at a donut shop? Yes a donus!
Click to expand...

I am excited for doughnuts and I am not even in a doughnut shop!
Comment

What if Amazon bought out someone like Sears and made the stores into essentially giant walk in distribution warehouses (Sears basically had the Amazon model with the Sears catalog until they decided to destroy their business).
Comment
K

If Google (and Samsung and Microsoft) want to beat Apple they need to do one simple thing:

Make a better iTunes and make it work seemlessly with Android.

Currently Android phones are a nightmare to sync and have some of the worst UX I've ever seen. I've gone back to an iPhone after a year of misery with an Android phone.
Comment

I was really expecting it to be the price... I mean:
The way they slimmed down the iMac, removed features and ruined it's magnificent sound only to increase it the completely justified 200€ ($260) extra is totally worth it. I mean, my desk thrilled about the weight reduction...

xionxiox said:
right?? Where is this?
Click to expand...

That's my city's store! As mentioned, it's the Boylston St. store in Boston's Back Bay.
Comment
N

I thought about switching to an SIII or Nexus, but I got an iP5 instead because of my investment in the Apple Ecosystem. And the longer I stick with Apple, the harder it will become to switch. I've been on an iPhone since the 3G, but the tipping point for me was if Apple didn't change the screen size on the 5.
Comment

Hehe... I'm most interested in Apple Products because of the quality of the hardware and their supreme efficiency with batteries.

Radio said:
so you ask people at apple stores what brand they're most excited about?!

Guess what product most people are excited about at a donut shop? Yes a donus!
Click to expand...

The article does say they went to MS stores too.
Comment
B

70 customers? That seems like...not a lot of people to base an article on. Right?
Comment
F

For me its just the fact I do more work.

I keep finding my self sitting behind my Mac thinking... whats next.
Same goes for my phone and the rest...

With windows I had a lot more options/possibilities... but the downside is you need to configure them all, and keep them up to date.
In the past I lost a minimum of 1 hour a day with configuring or updating or testing... With my Mac I boot it, and go to work.

There is just nothing else to do with you Mac besides working and making use of it. No more tweaking, tooling, updating, testing, searching...

So in my personal case it saves me 1 hour a day...
Comment
M

"I just taught my Persian grandmother how to use her new iPhone. She's 77 and speaks no English," said Soheil Arzang, a 27-year-old law student in Palo Alto, California. "With a Windows PC there are so many buttons, it's confusing"
Click to expand...

Good luck to anyone who might have this guy as a lawyer in the future, they are going to need it...

Comparing a phone ui with that of a windows pc... Does a mac have any less buttons than a windows pc?

What's with people getting interviewed for reuters or such sites that they are almost uniformly morons, is it because people who perk up and volunteer to offer their precious opinions to news sites are usually rather vapid?
Comment
I

ersatzplanet said:
The article does say they went to MS stores too.
Click to expand...

Yes, but MS stores are notoriously empty so they effectively biased their sample. If they wanted to be competent they would need a location control that would allow them to look for this bias.
Comment
P

A whole 70 interviews around the world!!! Blimey Reuters. Anyone would think you were an international media agency.

In other News, Bear poops in woods.

Sarcasm aside. Windows error messages alone were enough to confuse my parents... years of support helpdesk to them on windows... bought them a Mac.... bearly any problems now... most related to their Hotmail account... now finally working after years as MS support imap now!