This is my first post, please be gentle if what I am saying is stupid.

I would like to change my current audio setup to include a low end Yamaha AV Receiver in the mix. What I would like to know, prior to buying it, is whether it will allow me to be controlled through the Apple TV 4K remote. I couldn't find a clear answer about that specific question online.

Here is the setup in question: 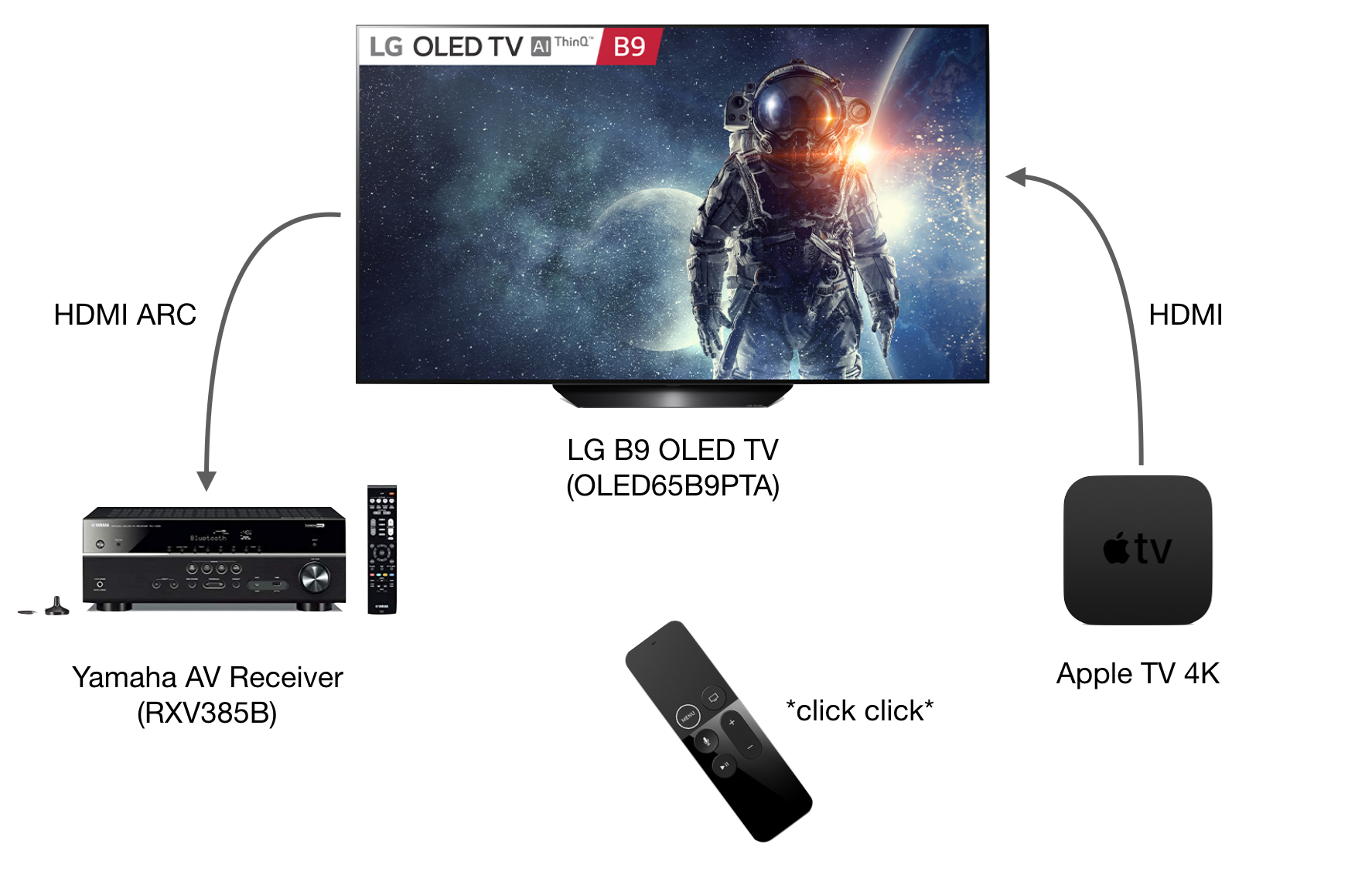 The TV supports HDMI CEC and HDMI ARC, and so does the AV Receiver.

I do not want to use HDMI passthrough and have the receiver in the middle (even though this is Apple's recommendation), first because I do not really care about Dolby Atmos as I have only a mere 3.1 setup (and the receiver does not support it anyway), and most importantly I really want to avoid seeing any of the receiver's UI on the TV. I want it to be as much out of the way as possible.

I know I can also have the Apple TV remote act as an IR universal remote but that's not what I want since the receiver will be in a closed cabinet.

Would anyone know if this will work as intended?
R

There is no guarantee that HDMI CEC is fully compatible between devices from different manufacturers, but yes, normally this should work. I use one of my ATVs with a Sony TV that has a Yamaha soundbar connected to it via HDMI ARC, and it works as you describe (i.e. I can control the soundbar's volume with the Apple remote through HDMI and the TV without requiring line of sight for the IR signal).
Comment

I agree with @Rigby.

Also, media players (like your ATV) should be connected to the receiver, not the TV, because many audio formats cannot travel over HDMI ARC.
Comment

@Rigby thanks a lot, sounds great, I'll probably go for a setup like that then and see what happens.

@ActionableMango I know that I will only get Dolby Digital Plus at most if I use ARC, but I think that's fine for my setup and better than having all the problems that the AV Receiver can introduce by, potentially, not passing the signal through properly to the TV (there are so many stories of bad video sync, lower bitrate and the like).
Comment
H

If you are spending the money for a receiver (and I assume its' attached speakers), I'm a bit puzzled as to why you would want to cripple it by just sending it the inferior signal from the TV, assuming it works. The Yamaha receivers are set apart from the competition by their DSP modes (Sci-Fi, Concert Hall, etc.). They are best experienced with a direct connect to the Apple TV.

Sure, there can be problems. That's just a "feature" of HDMI. You can run into issues even with your configuration. But why assume the worst? Get good certified cables and give it a try, You can always go back to your original suggested configuration if you run into problems.

I use a Harmony remote to start and setup automatically my Yamaha receiver, Apple TV and Television the way I want. Once everything is on I can then use the Apple TV remote as desired. I tend to use the Harmony remote given some of the ergonomic issues associated with the Apple remote.
Comment
P

@ActionableMango I know that I will only get Dolby Digital Plus at most if I use ARC....
[/QUOTE]
You see, the problem is, appleTV will never ever output DD+. It decodes it internally and outputs PCM 7.1 Whixh is too much for ARC.
Your best bet is to let aTV reencode all audio to DD5.1 (its special compatibility mode for old receivers).
Comment

priitv8 said:
You see, the problem is, appleTV will never ever output DD+. It decodes it internally and outputs PCM 7.1 Whixh is too much for ARC.
Your best bet is to let aTV reencode all audio to DD5.1 (its special compatibility mode for old receivers).
Click to expand...

Is that the case even if I force the audio format to 5.1 in the Apple TV's audio settings? I assumed it would output PCM 5.1 in that case.

Either way, what I am looking for is just simplicity. I am a heavy Siri user and want to be able to turn on and off not only the TV, but also the receiver with HomeKit. I also don't like to have remotes laying around. I am more concerned about keeping my interior tidy than sound quality honestly. I also never watch free to air TV. I use my TV only through the Apple TV 4K and the PlayStation 4. And their respective controllers is what I want to deal with, nothing else.

I'd get a sound bar if mid-range sound bars were any good, but every time I try one they sound so cheap that I can't understand why I would get rid of my super entry level 3.1 speakers to go with one. If I can keep everything simple with a modern AV Receiver, then wired speakers are just a simple option and less costly for me.
Reactions: BODYBUILDERPAUL
Comment
B

The B9 has eArc surely that will be a more reliable experience as opposed to Arc - as long as the receiver is eArc compatible.
Reactions: yeno
Comment

BODYBUILDERPAUL said:
The B9 has eArc surely that will be a more reliable experience as opposed to Arc - as long as the receiver is eArc compatible.
Click to expand...

The receiver does support eARC yes, so I should be good with the setup mentioned above ?
Comment
B

yeno said:
The receiver does support eARC yes, so I should be good with the setup mentioned above ?
Click to expand...

Amazing, with it having eARC, you shouldn't experience the problems that came with ARC.
Best of luck with everything buddy. The B9 and Apple TV 4K are an amazing combo!
Comment
J

I have a Yamaha Aventage RX-A770, Vizio E65-E1 and ATV4k. ATV is HDMI 1 to the AVR and monitor out to Vizio HDMI 1 (which is also ARC). Prior to tvOS 13, the Apple remote would power on/off everything. Now, it only powers on everything. Turning off only signals the AVR and then the Vizio stays on with no signal. Plugging the ATV directly into the Vizio, power on/off to all. I’d rather not have it this way and everything is set to ARC, CEC, HDMI control on. Currently, I’m using a Harmony Hub for now to control everything, but the wife/kids like Siri. Plugging a Roku 4K stick in the AVR works flawlessly powering on/off. Thinking this is an Apple TV control issue.
Anyone else having this issue?
Comment
You must log in or register to reply here.
Share:
Facebook Twitter Reddit Email Share Link
Register on MacRumors! This sidebar will go away, and you'll see fewer ads.
Sign Up
Top Bottom