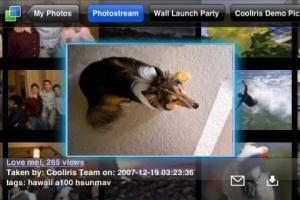 Cooliris has released version 1.3 [App Store] of their free iPhone application for browsing images and video on the Web. Details on the update are available on Cooliris' blog.

Version 1.3's biggest new feature is the addition of the "My Photos" tab, where you can search any public account in Flickr and Picasa, add as many accounts as you would like, then view the albums in Cooliris. There are a number of cool ways to enjoy the "My Photos" feature:

- Show off your public Flickr or Picasa photos on the wall
- Use the send function to email your pictures to your friends while you're on the go
- Save pictures from a friend's album to your iPhone
- Set pictures from your Flickr and Picasa albums as your iPhone wallpaper
Click to expand...

In addition to the new "My Photos" feature, the update also provides stability and performance enhancements.

Cooliris, which we previously profiled, utilizes a three-dimensional "wall" to display thumbnails of images and videos and takes advantage of the iPhone's multi-touch capabilities for easy browsing. In addition to the iPhone application, Cooliris is also offered as a browser plug-in for Mac and Windows that enables rich browsing experiences for a growing number of supported sites.

bigandy said:
I wonder if this will crash less than the version I tried
Click to expand...

We've been focusing a lot of energy to address all crashes in the previous version (it bothered us too!), and this version fixes all known crashes. Check it out and let me know if you still have problems!

Thanks!
Jenny & The Cooliris Team
A

i love the flickr and picasa support. hopefully there are plans to add private as well as public account support?
I

However, I find a few issues with it that I think would be easy enough to fix, basically regarding the UI.

First, I see no compelling reason for this to be a full screen app. The built in Photos app leaves the status bar at the top and I think Cooliris should too.

Second, the navigation is wrong. A tab bar could be used, or perhaps just more conventional drill down screens as demonstrated in the SDK samples. The existing navigation at the top is confusing and not a standard convention. I'm not sure what the first item (the icon) on the nav bar does.. it seems to be a home page of sorts, but I can't tell what it decides to show by default. Also, the navigation is confusing when you "drill down", as you have to scroll the nav buttons which isn't intuitive.

Third, there are performance problems on my iPhone with the animation effects, it is all a little choppy. It might be best to scale back or eliminate these.

Lastly, the app seems to always want to start up in landscape mode, even when I'm in portrait mode. It adjusts only after the static landscape mode splash has been displayed. Apple suggests not using splash screens anyway- the initial image should be a simplistic view of the UI to give the illusion of a cleaner, faster load.

In general I think you should stick to more commonplace UI standards. Nobody wants to have to learn the custom controls and navigation you've come up with in hopes of being fancy or perhaps just "different."

Anyway, I hope these sound constructive and not rude. I really think you have a great idea for an app, I just think you're trying too hard. People will use it because it offers solid functionality- it will "sell itself"- even though it is free A more lower frills UI that performs solidly and is in-line with Apple's guidelines and demos would get a lot more mileage I think. I'd be willing to pay a small amount for an app that behaves the way I've outlined here.
B

This program is a great idea, and looks real cool, but it is way to slow to try and use on a regular basis. (even on a WiFi connection) If they work on the speed and add content that you can't just get on YouTube that would be great.

hhhhh,,,,, cooliris may crash evern in my pc....
and for iphone, i don't really fancy its so-called cool style.

just another resource-killing app, i guess.