I have an early-2014 13" Macbook Air and since a couple of weeks I have some problems with the battery.

It first started when the MBA suddenly shut down at around 70% battery. It never happened before but I noticed the top case was very hot, so I just let it cool down before turning it back on.
I installed the Monity software to check on the battery status and overall temperature, which made me realize the fan was constantly running at around 1200rpm (which is the minimum I believe?) even when the CPU was hitting more than 80°C (with no app running) and the top case was clearly hot.

I tried an SMC reset but it didn't fix the fan and made things even worse for the battery as it would not even be detected anymore (white crossed battery icon in status bar) and the MBA wouldn't turn on without being plugged.

The only fix I found was to manually remove the battery, press Power button for 5 sec and put the battery back. But the fix only lasts for a few hours and I have to repeat the process every time I want the battery to be detected — it still unexpectedly turns off and I have to plug it for long uses, but I do it to prevent the CPU security lock when there is no battery detected. 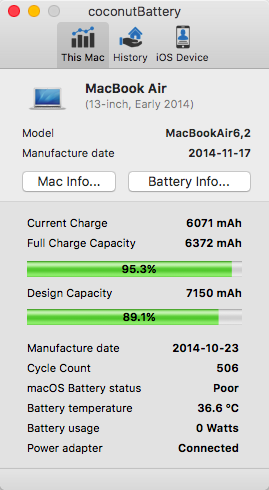 I just ordered a new battery, but do you know other tricks I could try if the problem is software? I'm also scared that it doesn't only involve a battery issue in terms of hardware...

Could be a combination of issues - failing battery and some runaway processes. If the system is working harder than it should it's going to pull more power, and if the battery can't keep up....

Open Activity Monitor and keep an eye on CPU utilization.

I'm not an expert on coconutBattery, but the difference between "poor" and "replace now" could be semantic. Apple's likely to err on the side of caution and have you replace a "poor" battery, while users of 3rd-party utilities are generally looking to avoid spending on new parts. A utility that encourages premature spending might not sell many copies.
Reactions: bernuli

Still, even with 506 cycles, your battery should still hold a decent charge until at least 1000 cycles. Based on the age of manufacture, your MacBook Air should still be under AppleCare.

Here is my Activity Monitor: 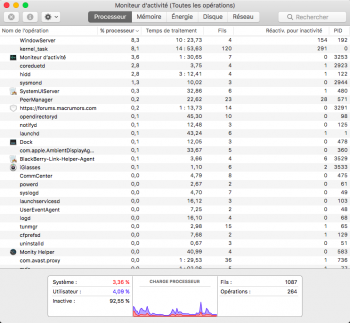 I will check it regularly along with the temperature. They both look normal for now. Maybe I should have done that during the overheating episode.


And sorry, I misspoke about the CoconutBattery results: I wanted to point out that despite having the symptoms of a close-to-death battery, it is still showing a decent full charge/design capacity. And just as Johnny365 said, it is half the estimated cycle count limit claimed by Apple for this model.


I unfortunately didn't buy an AppleCare plan and I guess it's too late to do it now?

AppleCare can only be added within the first limited warranty year, to extend to 2 years (3 total).

Have you tried cleaning the fan out with compressed air? Open the bottom plate, and then stick a toothpick in the fan fins while blowing it with air so it doesn't damage the motor.

Maybe it's not even spinning at all and 1200rpm is displayed by default.

Would it be safe to turn on my MBA without the bottom case on to check if the fan is working?

And thank you so much for helping me!

That, I am unsure of. I heard different things on whether the cover has to be on or off to allow the computer to turn on.

I still don't get why, but today's daily SMC reset seems to have miraculously solved the problem.
My Macbook Air turned on on battery, the "Replace Now" alert was gone and coconutBattery displayed a Good condition.

I used it all day on battery and now it's charging without any problem. The fan speed is also adjusting correctly to the temperature. 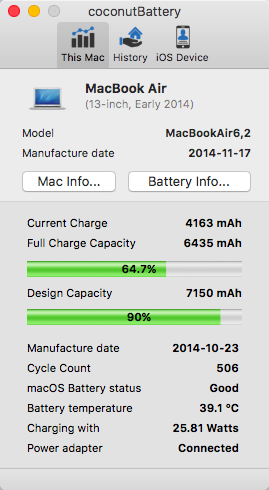 I don't know if it's going to last but for now, everything is working fine.