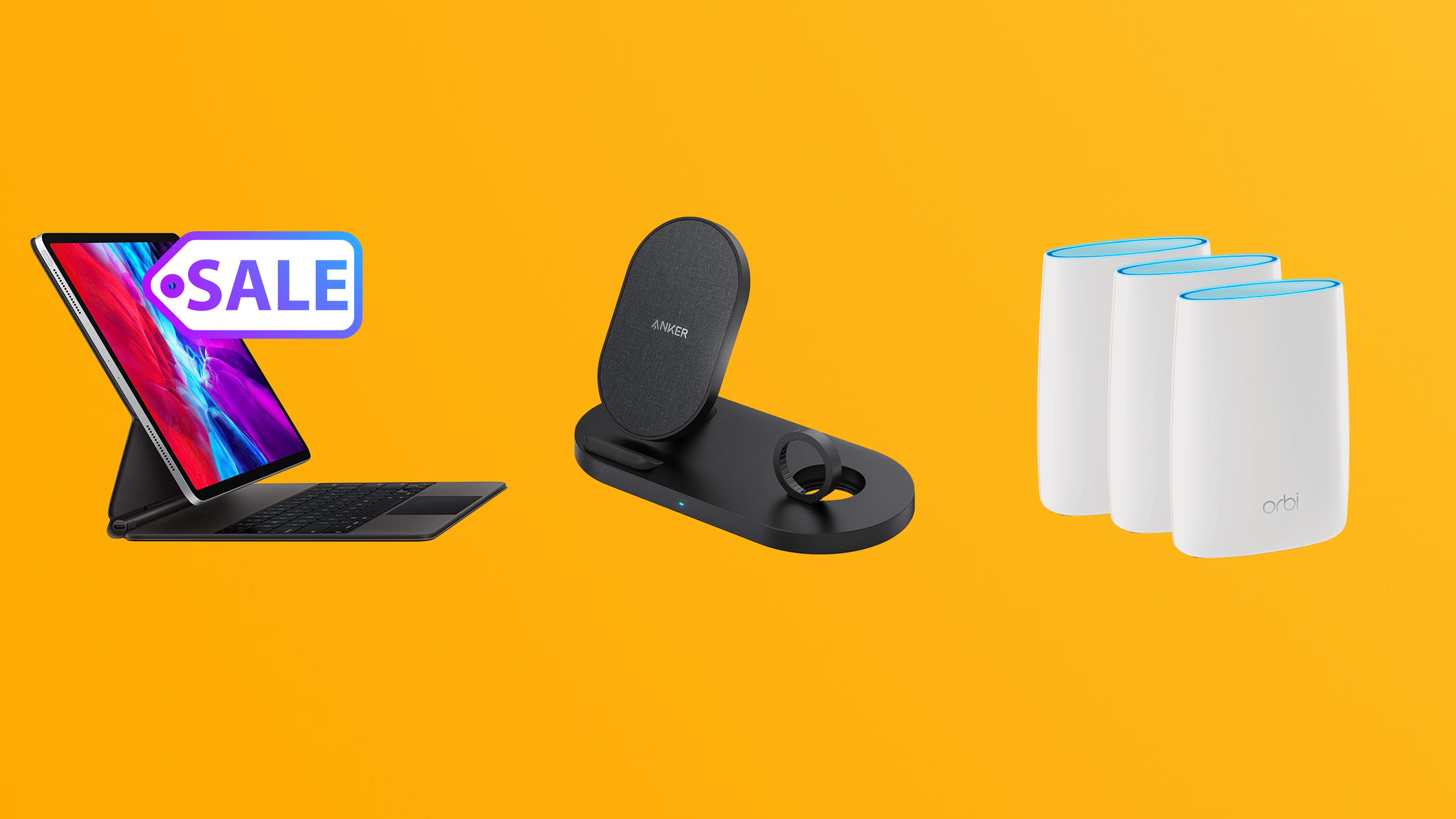 Note: MacRumors is an affiliate partner with some of these vendors. When you click a link and make a purchase, we may receive a small payment, which helps us keep the site running.

Anker's newest batch of discounts include savings on wireless chargers, USB-C chargers, Bluetooth speakers, and more. These are a mix of discounts that have been automatically applied and some that need coupon codes, all of which you'll find in the list below.

Today at Woot you can save on the Netgear Orbi Whole Home Tri-band Wi-Fi System, priced at $309.99, down from $599.00. This device is brand new and comes with a one year Netgear warranty when purchased through Woot's website.

Compared to other retailers, Woot's sale is one of the best online this week. Amazon has the same Orbi system priced at $399.99 and Walmart is selling the accessory for around $415. This version of Orbi comes with one router and two satellites that are able to cover up to 7,500 square feet.

Solid deals also remain on Apple's Magic Keyboard for the 12.9-inch iPad Pro, which is priced at $249.00, down from $349.00. This discount has been applied automatically and doesn't require a coupon code.

This deal is a match of the best price ever seen on this accessory. The Magic Keyboard provides a full keyboard with a trackpad, backlit keys, and a floating cantilever design that lets you adjust the iPad Pro to find the best viewing angle.

Be sure to visit our full Deals Roundup to shop for even more Apple-related products and accessories. 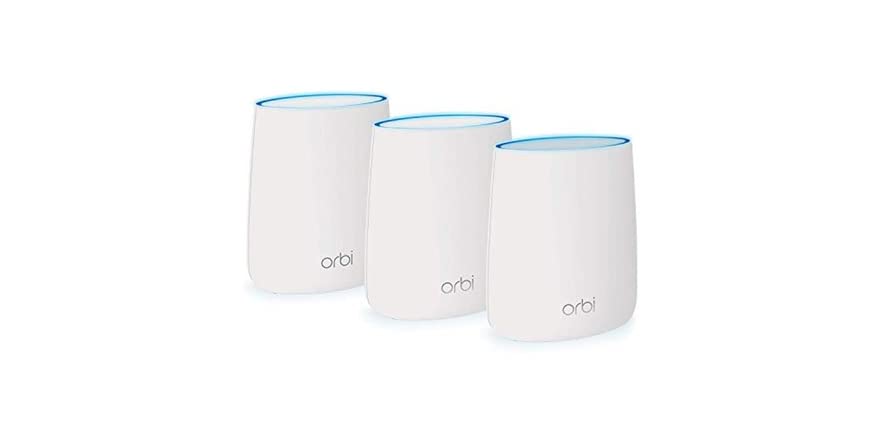 I would agree, WIFI 6 or 6e is a lot better. I am not a big fan of of the using the Orbi devices, if you. are going to design WIFI in your house and it is multi levels, you should use Ethernet or Powerline products, never been a fan of wireless bridging products. I have been using WIFI 6 for 2 years and with the use of DFS channels, I never get channel changes which cause streams to break and games to disconnect. I think in a couple years I will be upgrading to WIFI 6e as more people use WIFI 6 and more devices that use WIFI 6e come to market. I live in a very dense subdivision and over the years as more people got Broadband WIFI suffered with so many people online.

Kinda hate our Orbis, so, Your Mileage May Vary on these.

Got this exact model this past summer from Costco and finally have resolved all my whole-house wifi issues. We have a single dead spot in the stairwell but I think it's because of old construction and lots of metal in the walls.

We were using single hotspots and smaller plug-in repeaters around the house. No options for wired connectivity or powerline (noisy lines) so this was a good solution for us.

You don't say! I heard there may also be some deals on Anker products?
https://www.macrumors.com/2021/04/09/deals-anker-netgear/

Haven't tracked the cost of routers in a few years, but when we bought the 2-pack version of this, the WiFi 6 models were far beyond my budget. They are still significantly more costly. I understand wanting to "future-proof," but WiFi 5 has served my media/gaming-heavy family of 4 just fine, even during remote learning and working. Even with 300Mbps cable, wireless has never been the bottleneck.


irrg said:
Kinda hate our Orbis, so, Your Mileage May Vary on these.
Click to expand...

We like ours, going on 2 years. They are a bit kludgy when it's time for a firmware update, but hey - even my Apple Watch had a spasm the last time it got a new OS.
Last edited: Apr 9, 2021

Price reduction on the MK. Does this suggest the next iPad Pro will have a different keyboard? I own a 2018 iPad Pro, and the MK. So there goes my hope I could use my current MK with the next iPad Pro
J

After ~4 years, a combination of a prolonged bad-firmware-update cycle (the required-for-security update went out and broke features like Daylight Savings Time support, leading people with auto-DST enabled and one of the other features also enabled to see the router drop WAN [internet] connectivity every day or so until restarted, and a month later is still not fixed) and an apparent hardware failure (needed to factory-reset our router to get past the loss of connectivity; third time doing so it refused to reset and also refused to let traffic through to the internet), plus Netgear's policy of not offering ANY tech support after the first 90 days unless you buy a $99/year tech support subscription (!!!) led me to drop our Orbi RBR50+RBS50+RBW30 (I think it was; the AC2200 wall-plug unit) system. I didn't want to invest more in WiFi 5, and after this experience with Netgear's products and lack of support definitely didn't want an Orbi.

I ended up with an Amplifi Alien Router+Mesh, which as a two-node system does pretty much just as well covering our whole house as the three-node Orbi did (we added that last Orbi wall-plug satellite to extend coverage to the far corner of the house after trying every other logical position for the lone satellite, so I'm positive this is an improvement over what the Orbi could get with just two units). Definitely a pretty penny (more than twice as much as this system), but it is much more stable (even than when the Orbi was new), has a nicer and faster-responding app, and even has full control on the router itself via a touchscreen interface. Not to mention setup was an absolute breeze, and we get immediate feedback on how well-placed the satellite is (beyond just red or blue light from the Orbi). Our speed tests from my office added >10% on both down and up bandwidth tests, although I wasn't really lacking there anyway (from ~85-90Mbps up and down right after a router reboot to 100-104Mbps up and down here two weeks after the router was turned on and booted the one and only time); note we don't have gigabit+ internet so I was surprised the newer less-under-powered router made much of a difference at all.

When setting up a "holdover" router (the Alien is backordered, so took about a week to arrive after ordering; I can't just take a week off and call in "router sick" ...) I called our neighborhood tech for the ISP to make sure I had the right Dynamic IP etc settings. The moment I said we had gotten a new router because the old one finally died he asked, "Was it a Netgear?" Per him, ours was the fifth Netgear in our neighborhood that got replaced that week. He even tried talking to the Netgear support at one of those customer calls and was told that the Wifi 5 systems were just not a priority there anymore and so it would be weeks before any fixes might be available (caveat: this is the ISP tech giving second-hand info from the Netgear phone tech, who likely got the same rumors second or third hand from someone else, so grain of salt etc).

In any case, IMHO, I wouldn't see an Orbi system, especially one that is "old technology" and thus unlikely to have ongoing Netgear support, as a good investment these days. If you do get one, get yourself acquainted with the reddit r/orbi topic for insights into what each firmware update is breaking before you take it. When they are working, they are great (with the caveats of that generation being under-powered). Just make sure you are only upgrading firmware when it is absolutely necessary and after others have been guinea pigs and figured out which features the update will be breaking. And, when things start looking flakey, prepare for catastrophic failure and have a replacement router on order.
You must log in or register to reply here.
Share:
Facebook Twitter Reddit Email Share Link
Register on MacRumors! This sidebar will go away, and you'll see fewer ads.
Sign Up
Top Bottom