A number of developers are upset with an increasingly problematic iCloud server issue that is causing some apps that have implemented iCloud support to fail to sync properly. 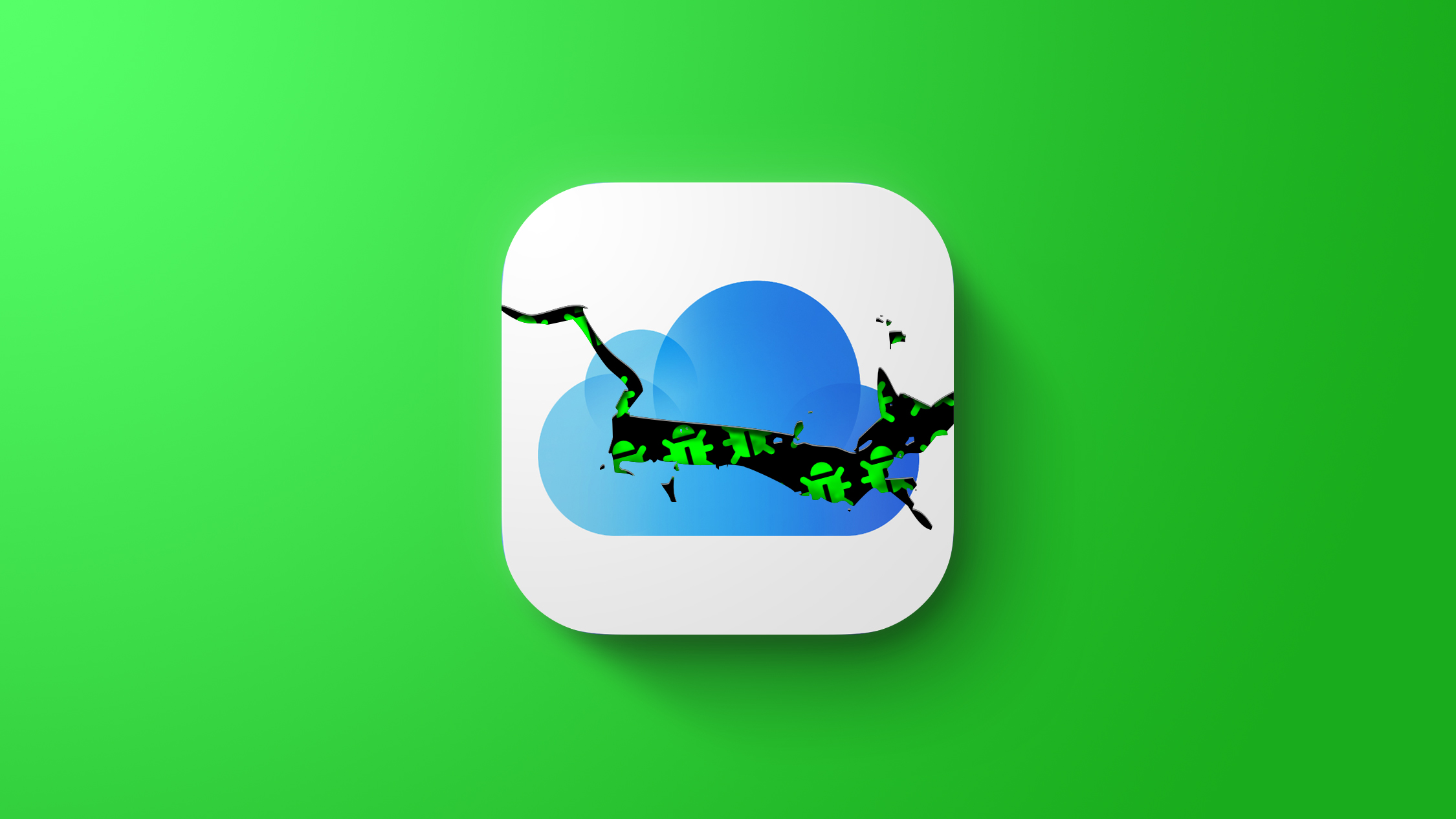 As outlined on the Developer Forums and on Twitter, there are CloudKit connectivity issues that have been occurring since November. Some users of apps that have iCloud support built in are seeing the following message: "Request failed with http status code 503."

The developers behind popular note taking app GoodNotes have been seeing the problem frequently enough that they wrote a support document for customers who are running into the error message. The GoodNotes team says that the app automatically retries to connect and thus the issue gets solved eventually, but they're not sure what's causing the connectivity error to begin with.

HTTP 503 is a temporary error code ("Service unavailable") indicating iCloud servers aren't responding correctly to requests from your devices. The error typically gets resolved as GoodNotes automatically retries, but we're getting many reports of the error lingering on, causing sync failures.

This issue is not apparent to us and we've escalated the case to Apple Technical Support team for investigation. It seems it's happening to other apps as well.
Click to expand...

Some developers have noted that their apps have worked without issue for years prior to the sudden appearance of the iCloud server issue that is apparently causing the error message. From a developer on Apple's forums:

A handful of developers have been able to get help from Apple engineering, and one was able to change their iCloud container for their developer account to fix the issue, but there appear to be many developers who are still having issues.


https://twitter.com/i/web/status/1485430657052512257
Other developers have resorted to building iCloud status dashboard into their apps so customers can see when iCloud is non-functional.

https://twitter.com/i/web/status/1485658382946213892
iCloud failures are a major problem for app developers because the end user of the app doesn't know that it's an Apple issue, so customers blame the app developers for a non-working sync feature that they have no control over.


https://twitter.com/i/web/status/1485434180943163392
Multiple developers have reported the iCloud syncing bug to Apple, but it has gone widely unaddressed based on the number of complaints and the fact that the issue has seemingly persisted for at least the last couple of months. It's likely that the problem popped up with the launch of iOS 15 and its sister updates, and it's not clear when a fix might be available.


https://twitter.com/i/web/status/1485402867921920000
Customers experiencing iCloud issues should be aware that it's likely an issue on Apple's end and not a bug that app developers can address at this time.

I'll continue to say it : iCloud has never been reliable.
I assume it's because its foundations come from the defunct MobileMe service.
Reactions: Rockoar, S G, planteater and 47 others

iCloud syncing has always been unreliable. Remember how long it took them to fix iCloud tabs in safari? Old tabs closed weeks ago would reappear, support promised a fix was coming, but never really did. Eventually it started working again for most folks though, and we think you’re gonna love it.
Reactions: michaelnugent, darkslide29, Oblivious.Robot and 23 others

Ugh! Hopefully, it does not take too long for Apple to fix this. Because Apple took forever to fix the safari tabs issue via iCloud. 🤞
Reactions: SFjohn, darkslide29, canadianreader and 9 others
F

iCloud sucks, I update a note in the Notes app on my iPad and it takes a long time to update it on my iPhone. Same for Files, Photos...
Reactions: SFjohn, HacKage, AmazeSE and 11 others

ouimetnick said:
Old tabs closed weeks ago would reappear, support promised a fix was coming, but never really did.
Click to expand...

It's still broken for many people, including me.
Reactions: PC_tech, Carlos Alberto Fiandrino, jam9 and 10 others
J

I thought it might have only been me... I have an app that makes frequent use of writing to an iCloud calendar every five minutes, and subsequently I have that calendar shared with my wife. For the past few months, she's had large dropouts with the calendar not updating for long, long periods.
Reactions: The Barron, arkitect, fwmireault and 1 other person
B

Multiple developers have reported the ‌iCloud‌ syncing bug to Apple, but it has gone widely unaddressed based on the number of complaints and the fact that the issue has seemingly persisted for at least the last couple of months
Click to expand...

I’ll tell you why, it’s because Apple doesn’t know how to fix it
Reactions: nothingtoseehere, shadowbird423, AmazeSE and 10 others

It's more like: Apple has never or will ever get Cloud right.
Reactions: Tim Apple’s Glasses, dk001, freedomlinux and 9 others

tgwaste said:
It's more like: Apple has never or will ever get Cloud right.
Click to expand...

Apple should really consider investing all the profitable money into iCloud data warehouses.
Reactions: SFjohn, dk001, Marty_Macfly and 3 others
T

I still run into issues with syncing iCloud tabs in Safari. Most other iCloud sync works fine though.
Reactions: An-apple-a-day and appleph

Well said, even though people in this forum struggle to admit it. It is also poorly featured compared to other services of the same price.

The ONLY pro I find in iCloud is its connectivity with Apple devices, other than that there is little going for it.

As I write this I have been unable to sync my devices for over two weeks due to bugs and data duplicity, even though I am paying for 2 GB of storage.
Reactions: PC_tech, shadowbird423, Marty_Macfly and 4 others
D

Apple needs to get their quality assurance house in order.
Last edited by a moderator: Jan 24, 2022
Reactions: Tim Apple’s Glasses, planteater, SFjohn and 9 others
A

I find iCloud synchronization in general to be super unreliable and intransparent.

In the finder on my Mac, files often show for an eternity that they are currently uploading or downloading, with no indicator of the progress or if anything is happening at all.

Same thing with the Photos app both on my iPhone and on my Mac. Sometimes, even very few items take extremely long to finish synchronizing without any apparent reason.

Sometimes files don't sync at all, ever, and it's unclear why.

iCloud is the only cloud service out there where you sometimes have to apply absolute brute-force work-arounds like "try to delete the stuck file and add it again, then it might sync" 😂
Last edited: Jan 24, 2022
Reactions: S G, planteater, SFjohn and 16 others
G

antiprotest said:
It's still broken for many people, including me.
Click to expand...

iCloud tabs totally disappeared for me with iOS 15 and Monterey, I assumed they'd just been removed entirely.
Reactions: brunerd, Shirasaki, Paul Cordingley and 2 others

fbr$ said:
iCloud sucks, I update a note in the Notes app on my iPad and it takes a long time to update it on my iPhone. Same for Files, Photos...
Click to expand...

The Maps app is randomly bringing up very old addresses and pins I dropped years ago… My iPad is not syncing with my iPhone for weeks now and is frustrating because I use the device for work, not much for entertainment.

Also, how is that “privacy” argument strong when now my address appears to be one I deleted in 2015. 😠
Reactions: SFjohn, dk001, Shirasaki and 5 others
X

Now you’ve done it.. iTools, Mac, MobileMe, iCloud.. another relabeling is coming in 3..2..
Reactions: dk001, Huck, Shirasaki and 4 others
V

Since November? Wow. I've been having issues since MobileMe. Books sometimes don't sync open page and Podcasts is a horrible mess. Safari open tabs stop syncing after almost every update. And my upload to iCloud drive is limited to 300KB/s when I have symmetric 600Mbps connection.
Reactions: shadowbird423, Huck, sideshowuniqueuser and 8 others

vault said:
Since November? Wow. I've been having issues since MobileMe. Books sometimes don't sync open page and Podcasts is a horrible mess. Safari open tabs stop syncing after almost every update. And my upload to iCloud drive is limited to 300KB/s when I have symmetric 600Mbps connection.
Click to expand...

…And sharing links and Drag and Drop functionalities were added relatively recently, something that was available in virtually every other competing service for years.
Reactions: shadowbird423, SqlInjection and vault
T

Come on, Tim Apple, let’s get on this— Quality Control is everything.
Reactions: Marty_Macfly, sorgo, Huck and 3 others
B

They did. The money just didn’t sync to the iCloud account yet. /s
Reactions: Tim Apple’s Glasses, SFjohn, saronian and 20 others

Very annoying bug, I rely heavily on iCloud for my documents and the sync issues are driving me crazy. I hope it will be fixed soon
Reactions: SFjohn, Marty_Macfly, Razorpit and 3 others
J

Someone in Apple management should dig up the video of S. Jobs berating the original MobileMe team for it not working. Then push the video to the computer of every iCloud team member.
Reactions: SFjohn, dk001, michaelnugent and 16 others

Stories like this are why I wish app makers wouldn’t succumb to the temptation to make CloudKit their apps’ only method of dealing with cloud storage. Give us options. Work, also, with cloud storage companies that aren’t being jerks about their respective APIs, especially where macOS and iOS users are concerned.
Reactions: shadowbird423, BanjoDudeAhoy and SqlInjection
You must log in or register to reply here.
Share:
Facebook Twitter Reddit Email Share Link
Register on MacRumors! This sidebar will go away, and you'll see fewer ads.
Sign Up
Top Bottom