Disappointed with no user customization options in iOS 6

Love the new apps and enhancements to the OS as a whole but I have to admit to being disappointed not to see any customization options to either the home screen or lock screens. This, to me, has been the biggest weakness of iOS for a while now and it just seems Apple continuously fails to address it. I want to be able to put information on my lock screen. I want to be able to be able to move apps icons and folders wherever I want on my home screen. I'd also like to be able to use widgets but this I could understand leaving off as it requires system resources. Overall, I'm happy with iOS 6 but I'm still left slightly disappointed b/c Apple failed to address this concern once again.
C

I don't think they will ever address it. It just isn't their thing.
Comment
T

chris2k5 said:
I don't think they will ever address it. It just isn't their thing.
Click to expand...

Unfortunately you're probably right. It's such an easy thing to implement so the fact that they haven't done it to this point probably means they don't plan on it. I just feel like there are millions of people with iPhones so it would be nice to distinguish our devices with a little bit of customization and differences besides the apps we have installed.
Comment
B

El3ctronics said:
I want to be able to be able to move apps icons and folders wherever I want on my home screen..
Click to expand...

...But you can. Just press and hold your finger down on the icon or folder until it starts to wiggle. Drag it around to your heart's content.
Comment
S

Themes on the app store would have been great.
Comment
E

bisnicks said:
...But you can. Just press and hold your finger down on the icon or folder until it starts to wiggle. Drag it around to your heart's content.
Click to expand...

I think you misunderstood what I meant. I want to be able to move icons ANYWHERE I want on the screen...not just in the predefined grid that Apple allows. In essence, if I want only two apps on my first home screen and want them in the middle spaces of the bottom row, I should be able to put them there. In the current implementation they have to go from top to bottom and left to right.
Comment
J

Just jailbreak if you want widgets. 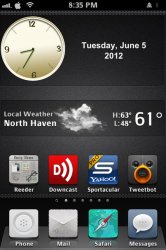 Honestly, even though widgets would be nice, it's not something I care greatly about and definitely not worth jailbreaking for...I still enjoy Apple's closed garden and knowing everything works as it should.

Also, not sure why my OP is being downvoted. I simply stated a disappointment in a lack of a feature that I'm sure most people would have appreciated had it been announced. Didn't say iOS 6 was a failure or anything like that but let's be honest...we're now 6 years into this OS and it should have these basic options.
Comment
B

customization was and is never apple thing. the most customization you will probably get with a stock iphone is changing the icons around in the order you want while still keeping the grid form and to be able to have the lockscreen and home screen wallpapers. but if you want widgets and all that customization there is always a jailbreak
Comment

...except most of the jailbreak methods are poorly executed and well below the standards of what would be expected on an iOS device. If I want a half ass working tweak, I'd rather just be on Android.

My most recent experience with jailbreaking (5.1.1) just convinced me that the quality of jailbreak apps still sucks. All I wanted to do was arrange icons on my screen the way I wanted.

Gridlock - Does all kinds of annoying weird **** if I get an icon too close to another icon while moving then generating a lot of extra work to fix all the icons it just moved all the while hoping I don't get too close to an icon again or I get to start from the beginning.

The other two options, one doesn't seem to work with 5.1.1 and the other only lets you choose designs for icon layouts, not the freedom to put it where you want it.

I have been iOS faithful for 5 years but I'm getting tired of the most basic of functions being locked away.
Comment

No, it's users who after 5 years would like a tad more freedom than changing a wallpaper.

I can sit here and sing the praises of the many great things about iOS...but **** if I am not bored as hell with the OS after all these years.

Many of these updates that are being presented with iOS 6 are great improvements...but only Apple makes improvements to apps and calls them a major OS upgrade. Sorry, but how much really changed about iOS?

Those are apps provided by Apple which on any other platform, see major updates independent of the OS.

iOS itself feels like it has barely changed since 2.0 when they opened up to third party apps and Notification Center which was nice, but minor in scope.

...I'm not asking for Android level freedom here. That brings a different kind of problem to the table and I think Apple is smart to provide users an option where they don't have to worry about borking their phone because they made one little mistake.

I'm asking for Apple to allow a little more freedom to both users and developers while still keeping a watchful eye (walled garden) on what actually makes it to release on the platform.
Comment
R

Im sooo glad i decided to leave apple and get the HTC one X now... All of this stuff we already got
Comment
R

Then you don't know Apple. From day one Steve Jobs/Apple has always had the idea that they tell you what you want. The end user doesn't know and their products are (to them) perfection and not to be messed with. That's Apple.

El3ctronics said:
Unfortunately you're probably right. It's such an easy thing to implement so the fact that they haven't done it to this point probably means they don't plan on it. I just feel like there are millions of people with iPhones so it would be nice to distinguish our devices with a little bit of customization and differences besides the apps we have installed.
Click to expand...

Well, we've seen this same static icon grid layout since 2007, so I think it's safe to say Apple ain't changing it. Ever. Won't get widgets. Won't get Themes.

Personally, I think Apple has too many 'i' devices and is spread too thin to devote much time to the iPhone GUI. Someone's making the decision to "leave it alone, it works". Revolutionary.
Comment
E

I was just in the apple app store. There are lots of apps to customize icons--skins even, not just the old borders, etc. You can get custom sms tone packages. AnyRing is now there also. Several custom dialers are there too. No, it's not perfect, and yes, my phone is still jailbroken, but its a start. Should work for those who dont want to jailbreak, y'know, ...cause it's evil.
Comment
P

Yeah..it's obvious Apple has no idea of what they are doing and what people want...I mean look at the continunig drop in iPhone/iPad/iTouch sales year after year with the same basic iOS...
Comment

To be honest, I don't really want to put icons where ever I want and I don't really need any information that I don't get from push notifications. And I almost never turn off wifi, bluetooth is always off, and airplane mode is almost never on, so I don't care much about toggles either. I do understand that people do want these though, and I understand why. I have no problem with having that there, I just personally wouldn't use it. So I get that.
But the thing I don't get is themes. I mean what's the point? I mean to paraphrase someone else from another thread (don't remember who it was, sorry) "Your phone is like a hammer. You don't need to customize your hammer, because it does it's job". So I never really got that.
Comment
You must log in or register to reply here.
Share:
Facebook Twitter Reddit Email Share Link
Register on MacRumors! This sidebar will go away, and you'll see fewer ads.
Sign Up
Top Bottom