A discovery that Apple's promotional materials for the iPad show properly-displayed Flash content while Web browsing in contrast to the "broken plug-in" icon observed on-stage at Apple's media event has generated a great deal of interest and discussion today, with some wondering whether Apple is yet planning to incorporate Flash support into the shipping product.

This is unlikely for various reasons, as Apple is likely to follow the precedent set by the iPhone and not offer Flash support for the iPad. First, as several observers have noted, Flash content was similarly shown in promotional materials for the iPhone prior to its introduction, leading to speculation at that time that Flash would be supported. The iPhone, of course, still has not supported Flash to this point.

Second, Adobe's Flash team, which would likely be aware if Apple were planning to offer Flash on the iPad, has already reacted and is apparently resigned to the fact the Flash support will not be included on the iPad.

It looks like Apple is continuing to impose restrictions on their devices that limit both content publishers and consumers. Unlike many other ebook readers using the ePub file format, consumers will not be able to access ePub content with Apple's DRM technology on devices made by other manufacturers. And without Flash support, iPad users will not be able to access the full range of web content, including over 70% of games and 75% of video on the web.

If I want to use the iPad to connect to Disney, Hulu, Miniclip, Farmville, ESPN, Kongregate, or JibJab -- not to mention the millions of other sites on the web -- I'll be out of luck.
Click to expand...

Finally, several readers have noticed that in many shots the URL shown in Safari on the iPad in Apple's promotional materials is actually an apple.com gallery page rather than the real New York Times page it appears to be at first glance. 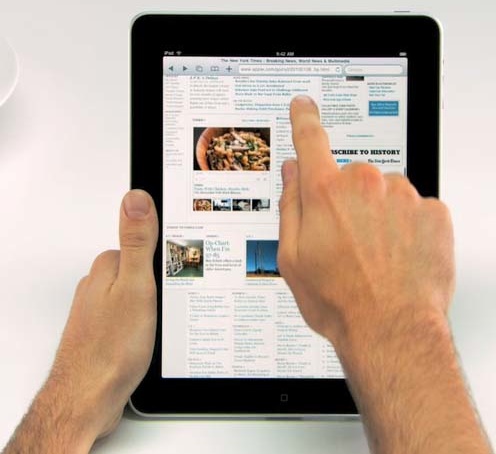 Consequently, it appears that the presence of Flash support in Apple's iPad promotional materials is either the result of video editing tricks or a specially-configured Flash-compatible iPad used for the video and image shoots.

Of course, their excuse is "security protection".
Comment
M

And maybe those sites will stop using the proprietary Adobe-controlled Flash formats and use open standards like H.264 and HTML5 to present content.

That is really what Adobe fears.

Apple would be wise to create a content creation tool to wrap up the raw video/audio into a HTML5-based player that can be dropped into existing web content. This is what Flash really brought to the table; an authoring environment that allowed content creators to add more value to just a video file (via skinnable interactive ubiquitous players, ad overlays, watermarks, full-creen etc).
Comment
F

macintologist said:
Is this false advertising?
Click to expand...

you can't be serious.... at what point in the advertisement are they promising support for flash let alone even mentioning flash?
Comment

Don't get me wrong: I love Apple and am a Mac user from way back. But what in the world is the problem with Apple not wanting to support Flash on it's mobile devices??? Doesn't anybody have a clue? I mean it's way obvious that a vast majority of websites use Flash in one form or another. Particularly in the case of streaming video content that was archived. I just can't figure out why Apple (read: Steve Jobs) would have against Flash?! Is it Adobe? Did they do something, eg like the CEO of McGraw Publishers??? Any comments or ideas??
Comment

Bait and switch! Call for an investigation!

I don't think we need to overreact but when it comes to Flash support I'm surprised Apple isn't more careful about the impression they give all of us.
Comment
F

Sayer said:
And maybe those sites will stop using the proprietary Adobe-controlled Flash formats and use open standards like H.264 and HTML5 to present content.

That is really what Adobe fears.
Click to expand...

Evangelist4Him said:
But what in the world is the problem with Apple not wanting to support Flash on it's mobile devices??? Doesn't anybody have a clue?
Click to expand...

i think Gruber has a clue, read this:
http://daringfireball.net/2010/01/apple_adobe_flash
Comment

Quick, let's post as many stories as we can about Flash on the iPad instead of updating the previous one or maybe thinking the last one through a bit before posting.

In any case, I think it's highly unlikely, mostly for the reasons mentioned here (but not to discount the reason that, if it's anything like Flash on OS X, the battery life will be reduced to 10 seconds, and the back will double as a toaster oven).
Comment
0

why not HTML5, JS, CSS...? of course adobe says that you need it! they SELL it! would you think of a car seller that told u: well, you can also catch the bus, or buy a bike...
I hope flash is, in some years, like if you saw now a web full of frames, like in the 90's!
Anyway, apple could let people choose if they want to turn it on or off, wouldnt they?
Comment
O

Wow, who's the rocket surgeon that came to THIS conclusion?
Comment

I'm as big a "fanboy" as one can get but imho Apple IS indeed using false advertising when it shows the NY Times but it is actually an internal Apple file.


Apple needs to come out in full view and explain exactly why it doesn't support Flash and if it does indeed keep certain API's unavailable to Adobe. Which I don't think it does.
Comment

fribhey said:
you can't be serious.... at what point in the advertisement are they promising support for flash let alone even mentioning flash?
Click to expand...

macintologist said:
Is this false advertising?
Click to expand...

Some are even saying this is fraud. Not sure if they are right but I thought it was interesting.
Comment
M

Check this html5 player out!

MacRumors said:
Consequently, it appears that the presence of Flash support in Apple's iPad promotional materials is either the result of video editing tricks or a specially-configured Flash-compatible iPad used for the video and image shoots.
Click to expand...

Can I have that "specially-configured" iPad pretty please
Comment

OK. This is not false advertising. They are NOT advertising that Flash is supported. The images you see in commercials... get this.... for the most part are always fake!!!! When you see the iPad, iPhone or iPod Touch in use, that's a simulated picture. They don't film someone actually holding it and use that feed. They actually digitally add that content so it's clear, sharp and they have control over how quickly apps open, etc.

It's all simulated. Of course they aren't going to show the broken plugin puzzle piece in the ad or promo media. That would be stupid. Just like Best Buy isn't going to take a picture of a television playing a movie, then slap that in their brochure. Advertising/commercials are all about deception. That's how they get you. In order to make you see something look as good on a screen/print as it does in real life, they have to artificially enhance it.

Who among us thinks commercials tell us the whole truth??
Comment
X

I just did and it crashed my Safari!

Flash runs so badly on every Macintosh I've ever used, that I'm not surprised Apple aren't supporting it on the iPhone/iPod Touch/iPad. Even the smallest bit of Flash in a web page drives my CPU up to 85% or so. The battery on the iPhone or iPad wouldn't last long under those circumstances.

Users can be mad at Apple about this decision, but I'm a little more miffed at Adobe for not working hard to make Flash run as well on the Macintosh as it does in Windows. I could be wrong, but I tend to think the iPad and iPhone would include Flash support if it did.
Comment
S

Likely not? It is not. Compare the real images from the website displayed to the iPad promo. They are enhanced and altered. Apple almost definitely downloaded the page from New York Times, manually edited the HTML, replaced flash content with an edited JPG. This is MUCH easier than video editing and takes under 10 minutes.
Comment

You guys are missing the point.

I will double mortgage my home and sell all my vehicles in anticipation of the iPad doing Flash content. I will quit my job so I can start a company that produces Flash content for the iPad.

If Apple does not produce an iPad capable of displaying Flash content in 60 days it will ruin me psychologically, emotionally, and financially. I will need at least 5-8 years to recover during which time I will expect Apple to recompense me for any lost income.
Comment
You must log in or register to reply here.
Share:
Facebook Twitter Reddit Email Share Link
Register on MacRumors! This sidebar will go away, and you'll see fewer ads.
Sign Up
Top Bottom