Having seen one too many damaged AC power adaptors around I wasn't going to let that happen when I first got my MacBook Pro, so here's a simple, cheap and dare I say professional looking DIY solution I came up with.

The problem
A common problem with these AC adaptors is that the cable ends (near the Magsafe connector and where the cable comes out from the AC adaptor itself) are very prone to breaking if not handled very carefully (i.e. not bent/folded or twisted). 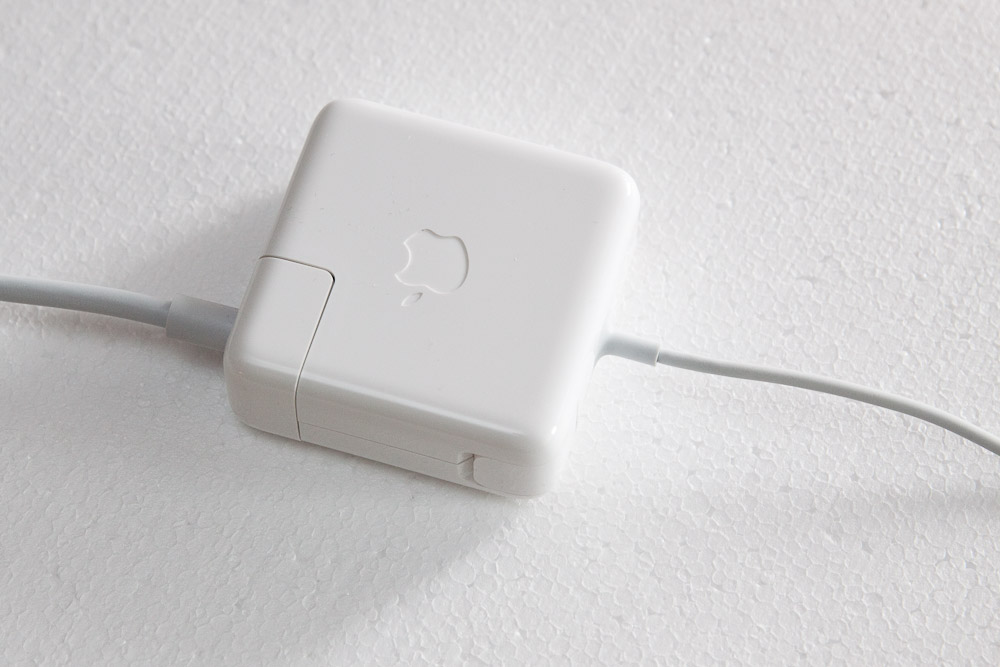 A damaged AC-adaptor is useless because of Apple's proprietary Magsafe connector (I believe a replacement is near impossible to find due to Apple's patent on it), and even with just a broken cable at the AC-adaptor end it's very hard to open it up in order to cut/resolder the cable at that end. Apple's solution: spend your hard earned $$$ and buy a new one!
My solution: be proactive to ensure the adapter doesn't get damaged in the first place

What needs to be done?
We want to prevent the cable from being bent too much, which is hard to avoid in the long run when you wind up the cable for traveling or whatever. The most fragile sections are the areas around the Magsafe connector and the immediate area where it comes out of the AC adaptor. We need to stiffen up those areas so there's less chance of bending the wire.
The solution is heat shrink tubing.
Heat shrink tubes are inexpensive plastic tubes which shrink when heat is applied. They're ideal for covering electrical wires etc.

The challenges
The heatshrink tubes need to slide over the Magsafe connector but also have to shrink down to the diameter of the cable, for a tight fit in the end. Most tubes don't shrink more than 50% but I found a 9.5mm diameter type with a 3:1 shrink ratio which did the trick at eBay. It cost me around US$ 2.50 in total.

The second challenge was to heat up the tube without melting the cable, AC adaptor or Magsafe connector. I solved this by covering the exposed areas around the tubes by several layers of paper tape (painter's tape). In hindsight I see that I could probably have used several layers of aluminum foil as removing the sticky residue from the tape (especially on the cable) turned out to be a real hassle. I think aluminum foil, as thin as it is, both takes up heat easily but also lets go of it quickly so the next layer/fold won't receive that much heat. Your mileage may vary and there are probably better solutions around -please do share if you come up with something better! 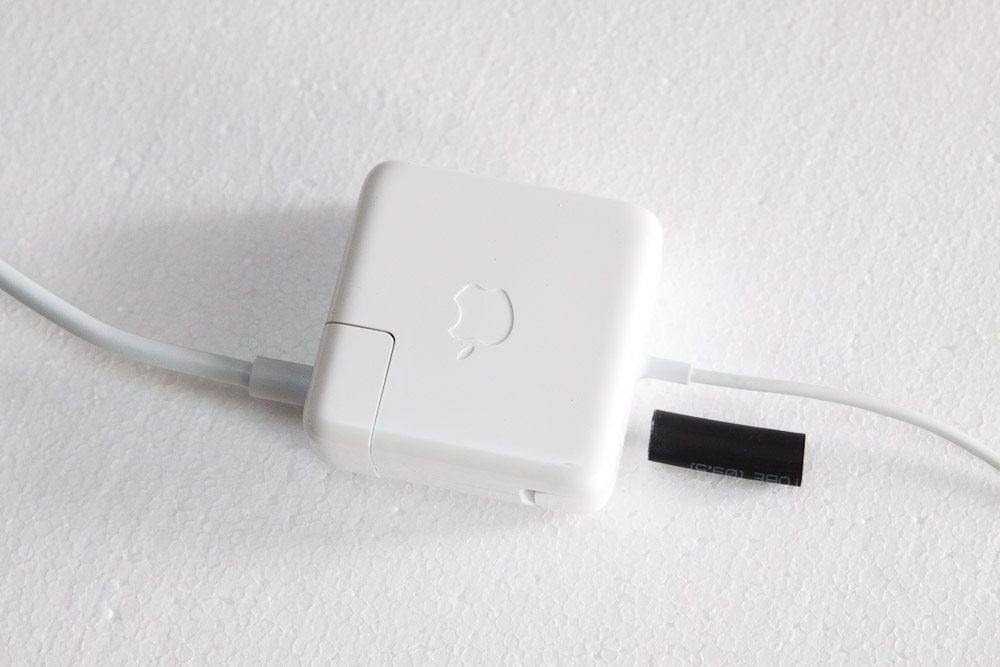 Figure out how long a tube you need for the AC-adaptor end. You'll want it to cover the critical area which easily gets bent but not over do it as that'll defeat the purpose (making it easier to bend/break again). Check the length by placing the tube next to the cable, then cut it to the length you need. 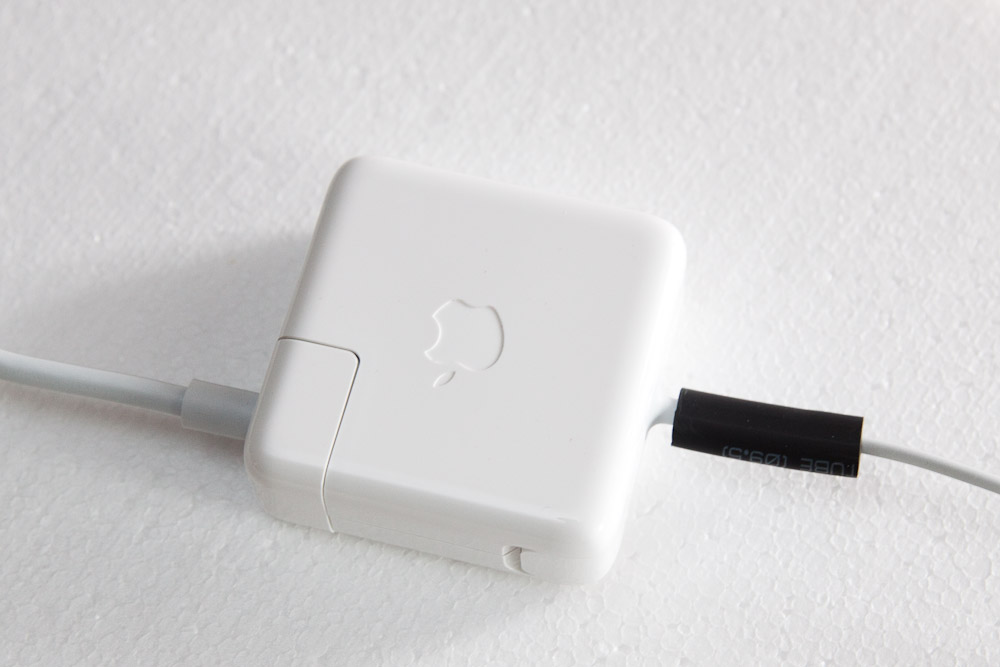 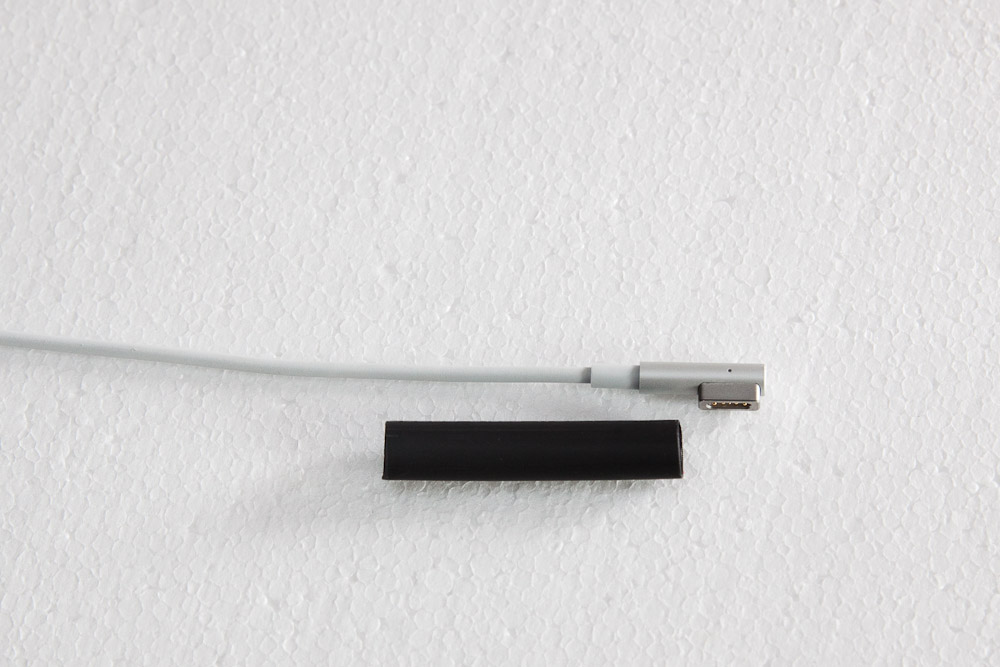 Check the length of the tubing at the Magsafe connector end in order to cut it. 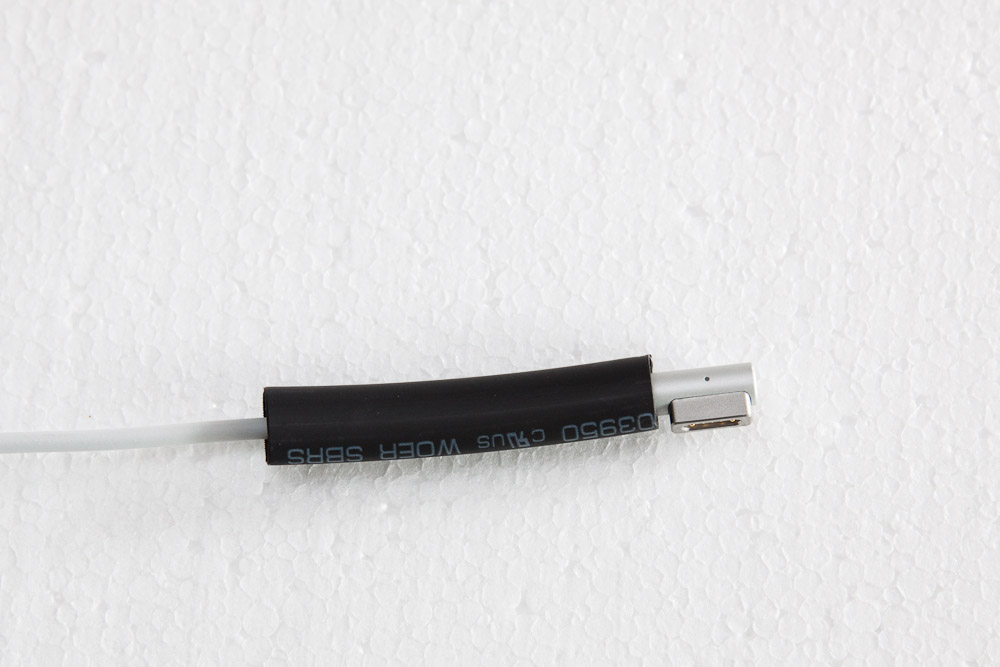 Slide the pre-cut tubing over the Magsafe connector to where it should be. 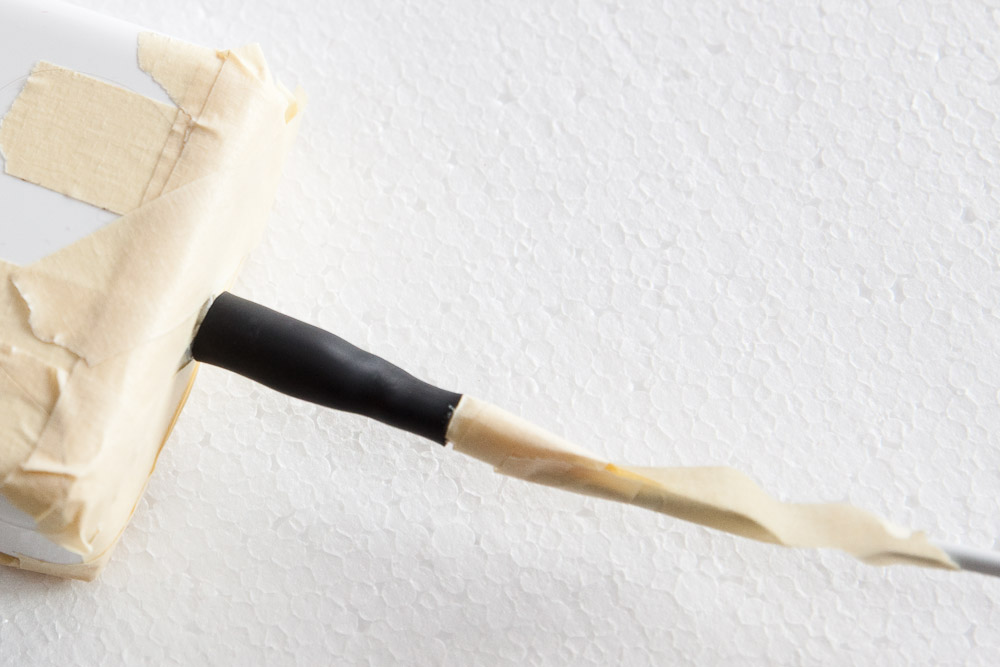 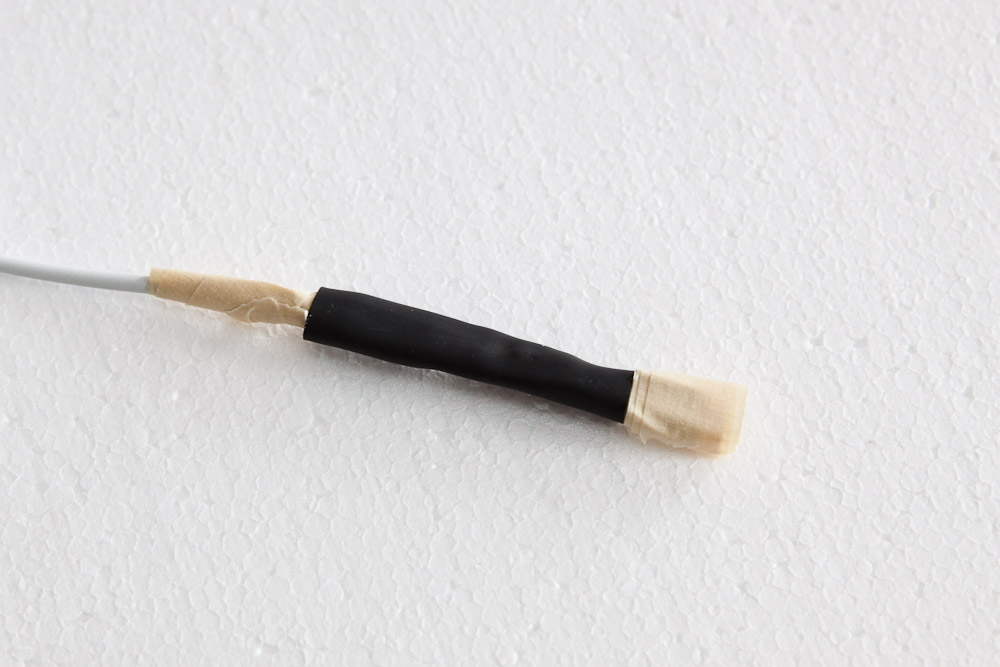 Cover the exposed areas around the heatshrink tubing with something that'll keep the heat away. I used paper tape (regular plastic tape will just melt) but later in the process switched over to several layers of aluminum kitchen foil to avoid the sticky tape mess. A combination of the two might be a better solution.

When that's done it's time to heat up the tubing using hot air (a hair dryer or a hot air gun). Ensure the tubing is placed where you want it and start blowing hot air onto it. Try to heat it from both front and back sides so it'll shrink as much as possible. Try to avoid heating up the AC adaptor and cable if you can and do regular checks to see it's not getting too hot. Take your time and let it cool down now and then. You don't want to melt the cable nor the AC adaptor itself!
The heatshrink tubes should (depending on the shrinkage ratio) ideally hug the cable tightly. Here's the end result (the transparent goo at the end of the tube close to the Magsafe connector is melted adhesive from the inside of the tube which keeps it in place and ideally should make it waterproof as well: 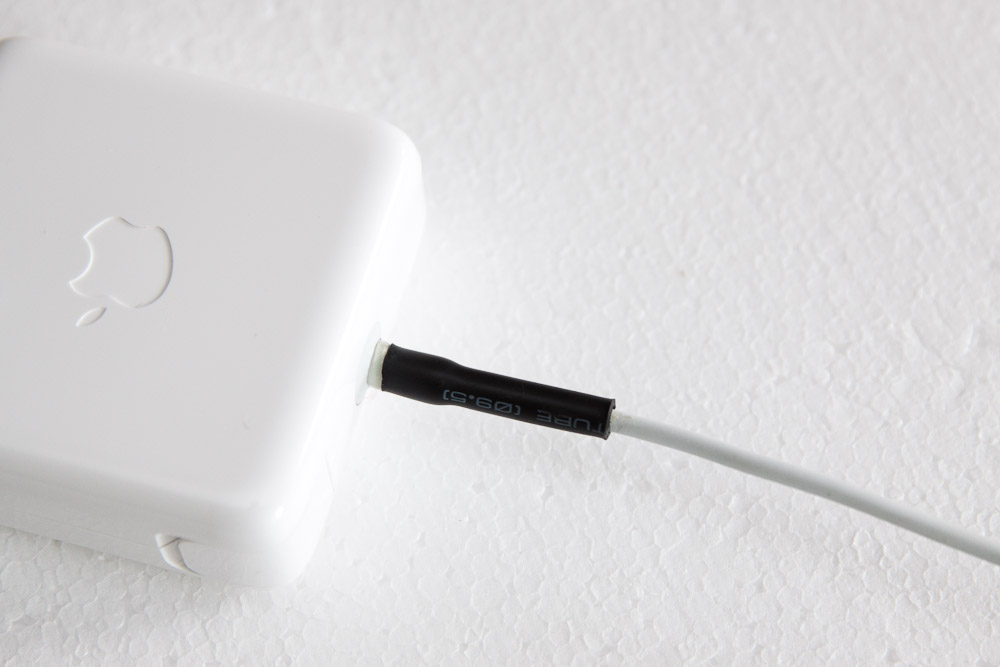 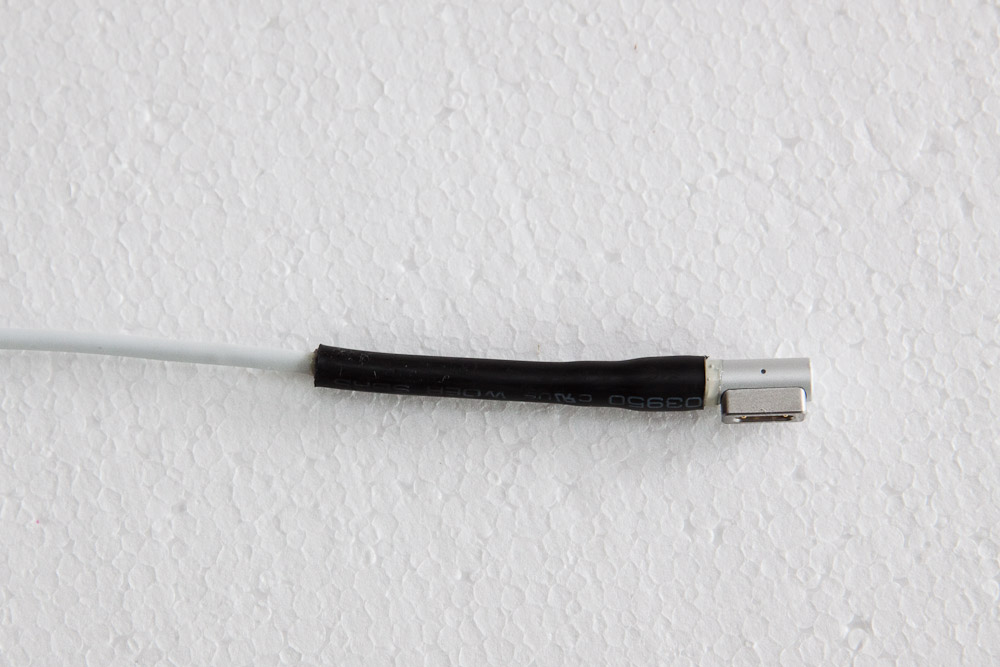 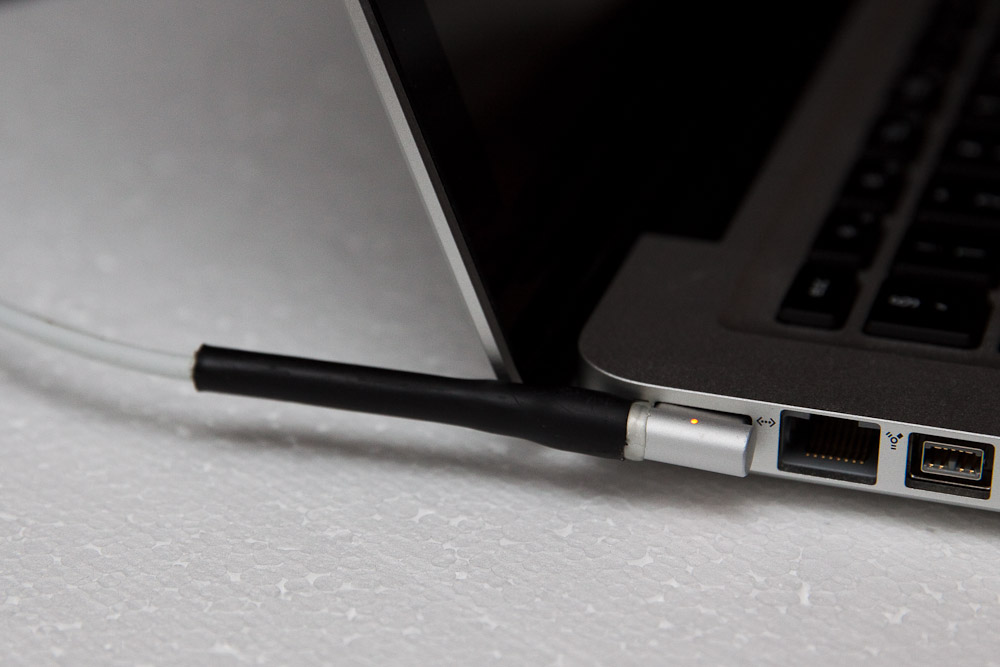 Good idea although maybe some white heatshrink would be better.

Yes, you've got a good point there. White would likely make it look more like Apple placed the heatshrink tubing there themselves.
S

If you are very worried about it I'd use this stuff.

But isn't the adapter covered by applecare???
G

Great tip! I found some alternatives in different colors on ebay - white, red, clear, and black:

Looks to be the same type of material.

I've ordered each color and will report back.

Thanks for the tutorial! Since I've got one on the way, this'll be a great MBP project.

AppleCare covers the adaptor. Also we're back to 't' MagSafe connectors now which presents us with an issue. My solution is a rubber cable tidy from eBay for £1 and avoid using the built in winder on the adaptor.

I've used the same adapter for like 5-6 years now. I've never had a single adapter fray or break from use. I also don't wind my adapters tightly, but instead leave bit loose before winding it.

Looks good, though so far for my 2012 rMBP I've not needed to worry about that. Good to know I can go that route if I need to fix it

maflynn said:
Looks good, though so far for my 2012 rMBP I've not needed to worry about that. Good to know I can go that route if I need to fix it
Click to expand...

That looks like quite a lot of work just to avoid having to learn how to use a detachable cord...

I've personally been using various Apple laptops with Magsafe cables for 7 years already, but I've never damaged a single one. The trick? Don't yank it by the cable like an ape, grab it by the thick bit at the end and THEN yank it out. It's literally the same thing as when people used to complain about flimsy USB cables.

i did something like add ball pen springs around the parts that you covered with heat shrink, the springs do a great job for my iPhone cables, and i thought it would be nice on my adapters. pretty useful so far
M

Note to those still looking at this. A hairdryer is enough heat to shrink the tubing and poses no threat to the existing wiring so protection is a non-issue.
You must log in or register to reply here.
Share:
Facebook Twitter Reddit Email Share Link
Register on MacRumors! This sidebar will go away, and you'll see fewer ads.
Sign Up
Top Bottom