Dock extenders (female-to-male, NOT USB) - any that carry ALL signals?

I want to put a 30-pin dock extender cable on my Apple HDMI adapter, so that the heavy, non-flexible HDMI adapter—and the two cords connected to it—aren’t hanging off the iPad directly (taking strain and even pulling loose).

Not a normal USB iPad cable; a male-to-female cable like this; in between the iPad and the HDMI adapter: 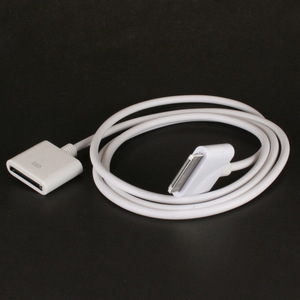 However, the extender cables I have tried (QVS and Xtreme) fail to connect the HDMI video signals. They work for charging and synching, and maybe audio (like to connect an iPad to an iPhone speaker dock). But not for video. The iPad doesn’t even detect that HDMI is connected.

I’m guessing they saved cost by not connecting all 30 pins.

Can anyone recommend a dock extender cable that connects ALL signals? Thanks in advance!

You can see the strain I’m trying to avoid—the Apple adapter I have is nowhere near as flexible as shown here, and would simply pull loose in real life, especially with a thick HDMI cable hanging off it:

Get an AppleTV, and mirror wirelessly.
B

Claims it does video (the basic version does not claim this). Might be worth looking into.

This one claims to support iPad and video over the cable.

Hammie said:
This one claims to support iPad and video over the cable.

I looked at that one but the reviews were pretty bad and said it didn't even support audio.

That CableJive one I posted earlier is also on Amazon

Reviews all say it does video. I assume this would work for what you want? There's also a 6' version.
M

Hi nagromme,
Have you had any luck finding an HDMI compatible extender?
I'm looking for exactly the same thing....
All internet searches seem to indicate extension cables just aren't made for HDMI.
Maybe we're out of luck.
Please post links if you've had success.