I have had a G1 from the day it came out. (I actually have TWO G1's due to a weird twist of fate.) I bought it mainly because I was annoyed that iPhones had no physical keyboard. I also have an iPhone 2g. This is a comparison of the old (and potentially obsolete) hardware that started it all for both OSes, and how these phones have stood the test of time. 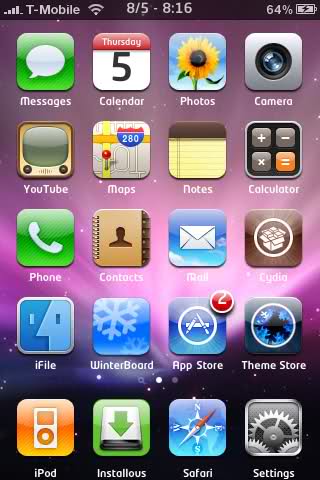 My actual screen shots.
G1 w/ Cyanogen 5.0.8 & iPhone 2g w/ iOS 3.1.3​
Screens:
First off, the iPhone 2g screen is bigger and better. There's really no avoiding this. It's brighter than the G1 and more responsive. The whole unit feels sturdier due to the solid engineering. I remember when I got the G1 it felt this solid for about two days. Then came the annoying squeak and the inevitable loss of the micro-usb cover. The iPhone 2G's screen looks incredibly sharp when compared to the G1, even on the brightest and dimmest settings.

Operating System:
I love Android. It's so open. The market is full of stuff that Apple would never allow. That being said, both of these phones have been out for so long that developers have had ample time to try and make up for any shortcomings the OS's may have. My G1 is rooted and tricked out. I'm maxing out the processor speed but the OS still lags. Even on vanilla 1.6 it lags. The only time I ever recall my G1 being more snappy was when Cupcake came out. The iPhone 2g is much faster and more responsive than my G1. I thought this was due to multitasking, but my 2g is jailbroken and multitasking fine. I even got MMS working on it! A small victory for something that should have been included in the first place, but a victory none the less. If I had known changing the wallpaper, and MMS, and multitasking could be implemented so easily and definitively then I wouldn't have used those as deterrents. And now that jailbreaking is so prevalent and even legal you can hardly mention those things. Furthermore, all of these things are actually condoned by Apple on their current flagship, which means they're at least listening to the consumers. The fact that the iPhone 2g is OLDER and yet still runs smoother than Android is telling. The hardware is just better at running the OS. You could claim that iPhone has had more time to smooth out the kinks in the 2g, but after almost 2 years my G1 has kinks aplenty, and Google has all but abandoned the aging hardware. Fragmentation has caused carriers and hardware manufacturers to take eons to update individual devices or even leave some completely abandoned. Meanwhile the 2G got an updated a few weeks ago (trivial as it may be). I've gotten so used to the sluggish G1, that while i'm using my iPhone 2g I think to myself, "Damn, how could the 3GS and iPhone 4 be even faster!" Oh, and here's a telling example of the functionality of the OS's: I use the Android lock screen on my iPhone because it's far superior to the iOS lockscreen. Please tell my why on iPhone 2g the Android lock screen is smoother than on the G1! I also think the Palm Pre inspired fast app switching app ProSwitcher (when paired with Backgrounder) makes multitasking on the iPhone BETTER than multitasking on Android or even iOS4. Essentially I have my favorite features from Android and the WebOS cloned right on my iPhone. No other mobile OS out now has this type of genuine customization. This stuff doesn't feel like a hack or mod. 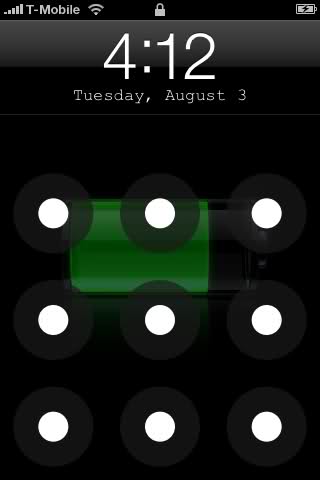 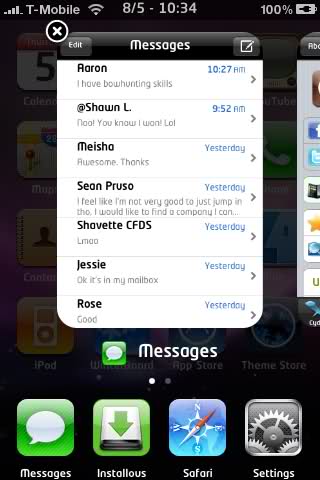 ​
Battery:
Overclocked or not, my G1 has always struggled with horrible battery life. In fact I've always had bad battery life on both of my G1's. I have so many G1 chargers its ridiculous. Three at home, one in the car and two at work! Why? because if I need to use GPS on my G1 I know my battery will dwindle to 30% in about an 45 minutes, especially on a sunny day when I need some backlighting. I've become a master of stretching the G1 battery to the limit, but mainly at my inconvenience. The iPhone 2g battery is better. Much better. It charges faster and lasts longer so I really don't NEED to have the swapability. Somewhere along the line we got so caught up on the convenience of having the ability to replace a dead battery, we forgot that batteries dying too quickly was actually the inconvenience. My iphone with HEAVY use can last 24 hours. My G1 with moderate use can last 14 if I'm lucky.

Text Input:
I'll give this one to the G1. The Gmail client and the texting on the G1 is fantastic, largely due to the physical keyboard. I had a texting speed contest with a girl at my job and I smoked her ass on my G1. That being said, the iPhone's virtual keyboard is WAY better than on Android. I was even typing on a Droid X the other day and was saddened that the keyboard was still less enjoyable than on the iPhone 2g. I do hate that the iPhone keyboard never seems to want to disappear once you enter a textbox, but other than that it's great. I have used every available Android keyboard from Swype to Swift, and while fast, they still feel less accurate and less responsive than the iPhone VK.

Games:
I use Nesoid (NES Emulator) on my G1, which essentially makes the gaming experience leaps and bounds beyond the iPhone. (iPhone roms/emulators suck because, well, you need buttons.) But I'll be damned if I don't love me some Fruit Ninja and Angry Birds! I think both platforms have a long way to go before people stop considering more robust mobile gaming like the PSP and Nintendo DS, but they're definitely on the right track. With the addition of Flash in Froyo, we may see Android pull far ahead in this category. Can't wait to find out. 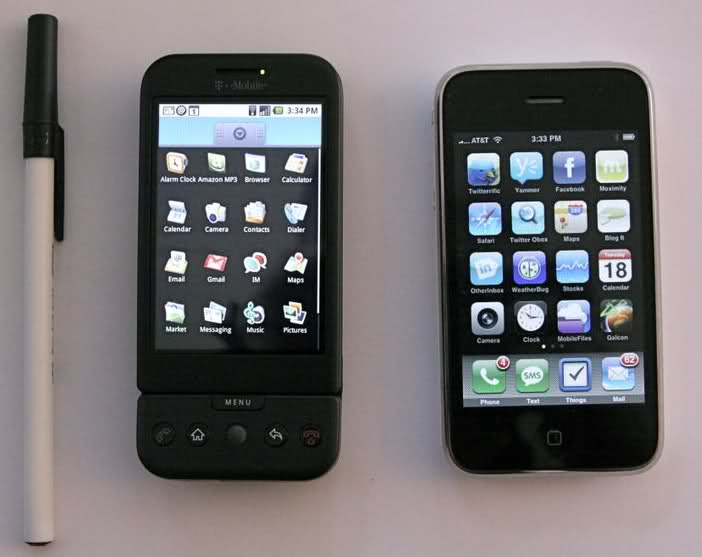 ​
Web Browsing:
Speaking of Froyo, I hear web browsing is fantastic on it. But on the G1 browsing sucks. In fact it's gotten WORSE since the OS has been updated. I used to be able to have 3 browser tabs loading simultaneously and remain loaded after leaving the browser (pre cupcake). So I could open Facebook, Twitter, and Android Community all at once and play a game while they loaded. Awesome! NOW every time I load another tab it just sits there until I go to view it. And God forbid I leave the browser. Then I have to wait for the homescreen to render (which is getting ridiculous), and when I re-enter the browser all the pages automatically refresh, ugh. The iPhone 2g's browser is better in every way to the G1's. Faster, smoother, and easier tab manipulation. I'm eager to see if RIM or Android can actually surpass this functionality, as they claim.

Jailbreaking/Rooting:
On the G1 rooting has given me tethering, screenshot capabilities, overclocking, and more customization options. On the iPhone 2g I have gained even MORE customization options via themes and different settings options. Still, the lack of widgets is a huge hole in the OS. I have also gained MMS, multitasking, and the fantastic SBSettings which is kind of like Bar Control for Android but better. Not to mention access to Cydia and Installous for my app pirating needs. Even though the Android community is very active and innovative, the iPhone dev community is equally ambitious and have had more time to work on their hacks and mods. iOS is no longer the cripplingly locked place it used to be. 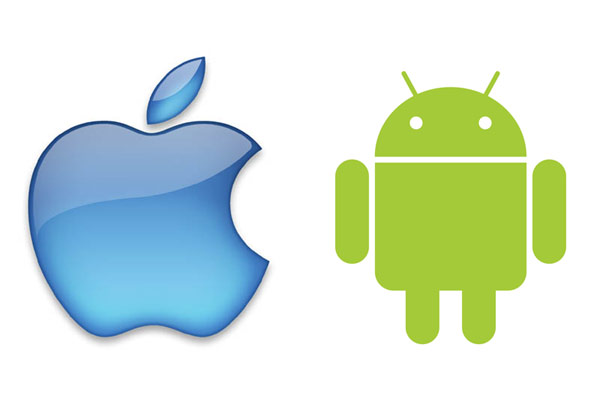 Wrap Up:
In short, both OS's have come far, but after using Android at length and switching to iOS for a few weeks I have come to realize that the iPhone 2g pretty much blows the G1 out of the water. I'm sure the iPhone 4 vs EVO battle is much more even, but when comparing the grandaddies that started it all, my eyes have been opened. I'm sure some may consider my descent into Apple territory an ill-informed decision resulting from peer pressure by the sheep-like masses blah blah blah. But i'm just a guy who loves phones and mobile technology who came to realize that there's plenty of room for mobile OS royalty in the tech world. If nothing else Android has become a type of Ralph Nader, forcing Apple to steal some of it's better ideas so as not to lose followers. I shudder to think where iOS would be today if it weren't for Android being right on it's heels. I feel that iOS is better for novices and modding power-users alike. The G1 today is barely usable, but the iPhone 2g is still relevant in my eyes. Android still has the benefit of offering more variety to the consumer, but this is often at the OS's detriment due to fragmentation. Still, if the iPhone had a nice keyboard I probably wouldn't be considering buying the HTC Vision/G1 Blaze this Fall. Yes, even after all that I'm looking forward to Froyo and Gingerbread and seeing where Android takes us.

Hey, a stock G1 vs a stock i2g would have been in the favor of the G1 lol
D

Malcontent said:
Hey, a stock G1 vs a stock i2g would have been in the favor of the G1 lol
Click to expand...

I'd hope so. The G1 came out a year and a half after the original iPhone.

I don't even come close to considering my iPhone original a grandpa phone. I've been using it without jailbreak for almost 3 years now and this puppy is still running strong. I can play games, browse the web, etc all day and still make it home without a charge. Though Angry Birds does seem to ravage my battery in extreme cases but that was only a couple times. No big. I'm currently waiting for the white iPhone 4 but if things go poorly I'd be more than content with this phone until the iPhone 5 or whatever it'll be called sometime next year. This thing is built like a tank and has taken everything I've thrown at it without issue.
M

diabolic said:
I'd hope so. The G1 came out a year and a half after the original iPhone.
Click to expand...

That's actually against the G1. Android was a younger OS. We're talking software not hardware. Unlike hardware, software gets BETTER with age.
J

From the title, I was expecting you to give them both to your grandpas to see how easily they adapted to them...
You must log in or register to reply here.
Share:
Facebook Twitter Reddit Email Link
Register on MacRumors! This sidebar will go away, and you'll see fewer ads.
Sign Up
Top Bottom