My 4,1 came with two SuperDrives and both seemed overly noisy so I swapped in a Samsung SH-S243 drive from a PC. Sometimes that drive would keep a disc spinning after it finished accessing it though it works fine in my PC. I ripped a DVD and noticed the drive was still going a few minutes after the rip was done. It stops if you eject the disc but its still annoying. And it sounded like the drive might have been trying to randomly read discs sometimes even when one wasn't inserted. I swapped it for an LG GH24LS70 that I picked up off Amazon. It doesn't continually run after reading a disc but its definitely got a mind of its own as I can hear it clicking and whistling randomly. Even during normal use its got a really annoying whistle so I think its going back.

What is a decent known working DVD drive? I want one without riplock (or at least the ability to disable it) and its got to be able to boot OS X if that's possibly an issue - I can't recall the last time I had a drive that wouldn't boot a Mac. I'd like to know models, not just brands. I did a bit of searching an LG drives seemed to be generally working out for people so that's why I bought the LG but its acting up as well.

Between removing the SuperDrives and installing the Samsung drive I did put a Crucial M4 SSD in the lower optical bay. I don't see why that should cause the drives to behave oddly but then I never had an optical drive act like these two have and have never owned an SSD before so maybe it could be an issue.
L

I had the Samsung in again today and its doing the same thing, random noises. I thought I read about something like this with some (or all?) blu ray drives and that people solve it by leaving a disc in the drive. Tried that and found it just keeps spinning the disc until I eject it! Having the SSD in the other optical bay doesn't seem to make any difference. It was disconnected for awhile today and I didn't notice any change.

I've noticed the same thing with an LG where it'll periodically "spin up" even if there's no disk in there.
C

I had the Samsung in again today and its doing the same thing, random noises. I thought I read about something like this with some (or all?) blu ray drives and that people solve it by leaving a disc in the drive. Tried that and found it just keeps spinning the disc until I eject it! Having the SSD in the other optical bay doesn't seem to make any difference. It was disconnected for awhile today and I didn't notice any change.
Click to expand...

They HP 1270T works like a charm i,ve never had any issues of any kind with it 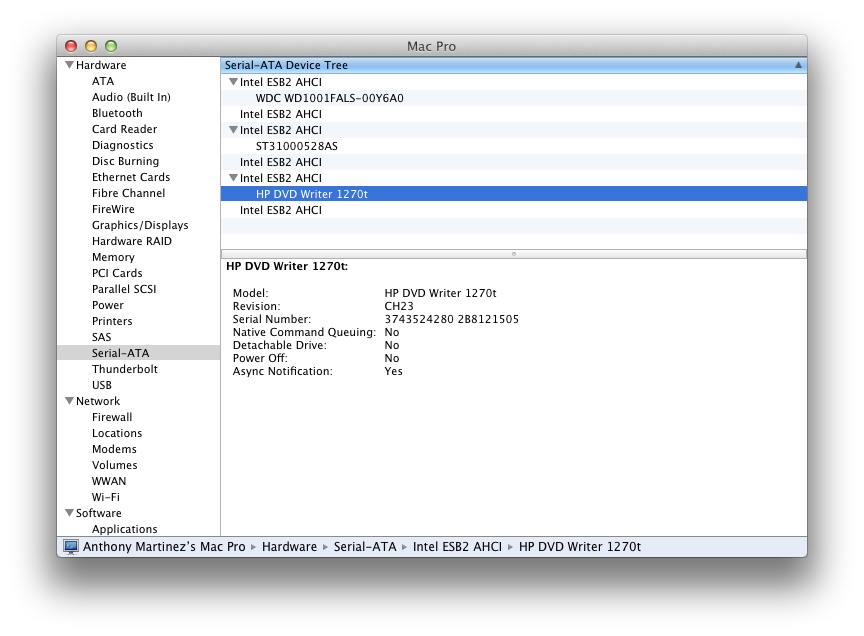 Thanks. That HP drive appears to be made by Lite-On.

Still hoping for some more responses but I'll do some searching to see what other info I can find to id other drives without this problem and to see if that Lite-On drive has riplock.

I never had this issue with my iMac but part of the reason I replaced it with a Mac Pro is to avoid the slow, slot-load drive. I had to keep an external drive just to watch Netflix DVDs since the labels they put on the discs cause problems in slot-load drives.
L

After doing some searching for info on blu ray drives (another thing I want to add to my Mac Pro) I found a suggestion to delete the com.apple.DVDPlayer.plist file as User/Library/Preferences and then reboot. The file would supposedly be regenerated based on the new drive(s) installed. this seemed to clear up random read issues some people were having. I don't know if it solved the blu ray drive being put to sleep and disappearing problem. Turning off the option in System Preferences supposedly fixes that issue but I'd prefer to be able to have that one for my hard drives.

I was a bit concerned when the filed didn't reappear after a restart or cold boot. I also lost the eject icon in the menu bar and am temporarily using a non-Apple keyboard without an eject button. But I was able to get the icon back by going to /System/Library/Core Services/Menu Extras/ and double-clicking Eject.menu.

Then I even played a DVD, which worked fine, thinking that might regenerate the plist file but it did not.

But the drive stayed quiet for the few hours I was using the Mac. Then today after waking it up from sleep I find the file back and the drive making noises again.
L

I picked up a Sony Optiarc Blu Ray burner based on reports that the Sony drives behaved normally on hackintoshes. Its BD-5300S. The BWU-500S is the boxed retail version of the drive. No issues like I had with my DVD burners and I'd read it doesn't have riplock which appears to be true. It rips DVDs at an average of 8x. More expensive than some other Blu Ray burners but I'm happy with it so far. Haven't been able to try a Blu Ray rip yet.
You must log in or register to reply here.
Share:
Facebook Twitter Reddit Email Link