I'm pretty bummed out about this. This was my go-to for Tetris on the iPhone.

Is it me or is all software basically a long-term subscription now, even if you "bought" it? This is not the future I wanted. 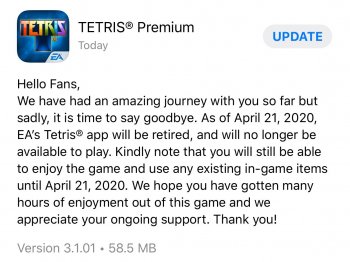 I didn’t even know this was a thing and they’re killing it?

So this concerns both the Premium and free version (with in-app purchase) that will stop to exist. Hopefully their are third party alternatives out there that slightly are a bit like the 'original'.


Offtopic on in-app/paid/ads matter: I'm not liking it that so many apps are filled with in-app purchases and ads (either banner or horrible full screen photo or video ads).

I'm so glad there are still developers out there that release apps where you pay once 3-10 euro/dollar and play the full game without ads or in-app purchases but they are so hard to find with Apple's App Store filters. On iPad you can still filter on certain things e.g. Search > e.g. 'Tetris' and then filter by 'paid' only but unfortunately this doesn't mean that these paid apps then don't have any in-app purchases or ads. But on the iPhone we are unfortunately still missing on iOS13.3 still the open to filter this way. You can only go to categories in the app store e.g. Games and then select 'Paid' but this is scrolling through list of top x games not based on search.

I'm a little confused about this. The game will be completely unplayable even if it's already installed? I'd assume it's all streamed over the Internet (or at the very least an access code) in that case, which is absurd for any game. This is my problem with digital software, you don't really own it.

This was me re: ForestVille by Zynga in 2013. After that, I stopped playing any game relying on any type of internet connection. I don't tolerate change of that magnitude.
M

It's being replaced by N3twork Inc version. 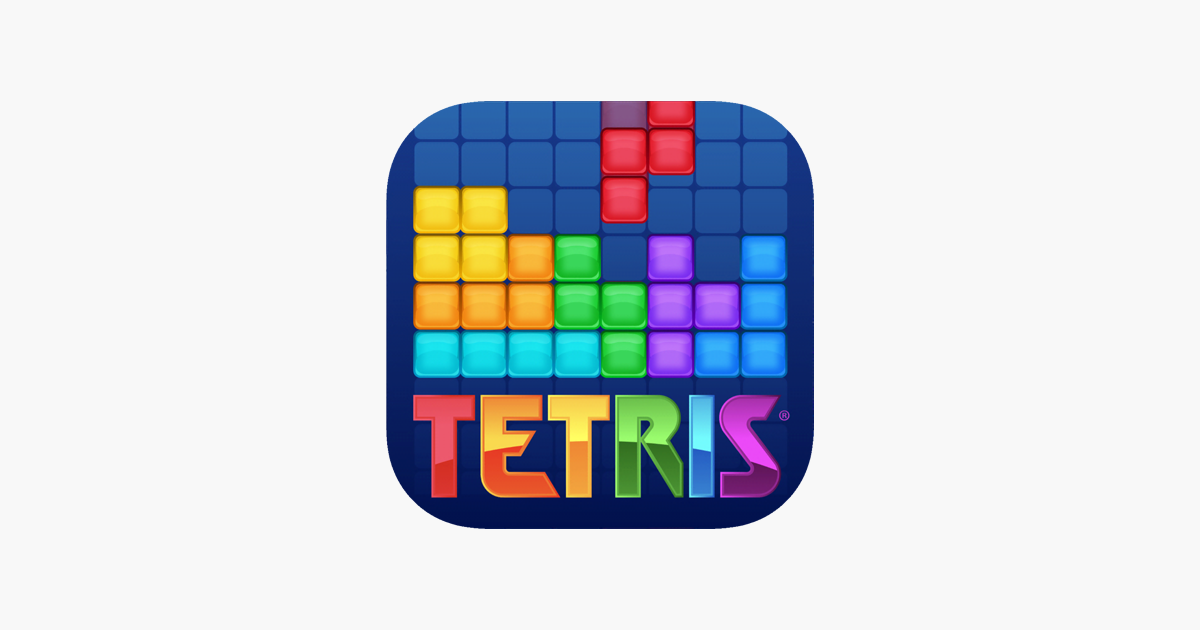 ‎Welcome to TETRIS®, the official mobile app for the world’s favorite puzzle game. Battle to be the last one standing in 100-player TETRIS ROYALE mode, play a quick round to beat your own score, or play infinite rounds to master your skills in the TETRIS Single Player Modes. TETRIS forever...
apps.apple.com

I'll stick with the NES ROM and emulator myself. No risk there
Reactions: compwiz1202
B

Apple should have a disclaimer in the description for "premium" apps like these. Something like "This app can be remotely deactivated by the developer". I think it's obvious that free to play games can be shut down at any time, as well as subscription-based apps. But when you pay for a premium app, or for an IAP to remove advertisements you don't think that the app will just "stop working" one day - unless you update the operating system. I've bought several "premium" games that require a download the second you launch it in order to get the content. And (I could be wrong - please tell me if I am) it seems like in some cases, the download comes from somewhere other than the App Store - otherwise a developer "shutting down the server" wouldn't affect it. I was under the impression that apps weren't supposed to circumvent the App Store in this way (side loading, in effect) and all content goes through Apple's servers. For example, I bought Pac Man Premium in 2013 and spent $15 on IAP to get some extra mazes. Old school Pac-Man gets boring quickly, so I didn't touch it for a few years. When I re-downloaded it, I found out that it was just a "shell" and that the mazes were no longer available because Bandai-Namco abandoned it and made a new version. Up to this point, I had thought that all IAP resided in the .IPA file, and a "restore purchases" would unlock the functionality you paid for - unless Apple went out of business, of course.

Don't laugh, but I got into that MLP game when FiM got popular and it's on an old Galaxy Note 10.1 from years ago. I turned off the wifi and launched the game and it plays and continued from where I left off. Even the purchased stuff was there.

Now, if I switched that tablet online, and launched the game it might force an update or disable itself. Just FYI, some of these 'games' might work offline and so long as it isn't ever launched to 'phone home' it will likely never receive the deactivation signal unless it were launched one the notice of discontinuation was active. I wish I knew of that trick in regards to ForestVille. I miss that game. There's no game that is like it from Team Lava (who makes clones of many Zynga titles such as FarmVille (Farm Story))
B

That’s true, but I had moved to a new device. I guess that if you do a restore when you upgrade it might still work on the new device, but I never restore

I don't play that game much these days (was a great time waster and I'm a fan of Lauren Foust's past works on Cartoon Network) but it's confined to that one tablet. I still kick myself over being stupid with it, the screen is spidered and the frame is slightly bent (it still works). I was carrying laundry from a laundromat years back with it balanced on top and it slid and fell butter side down.