eBay this week announced a new feature coming to its iOS and Android apps, which will give customers the ability to discover more items by dragging and dropping images while they're shopping. This drag-and-drop feature is one of the latest additions to eBay's AI-powered initiative, beginning with last year's "Image Search."

Instead of searching using images of items in the real world, like Image Search, the new feature surfaces results based on existing digital images found in eBay. The feature works by first requiring customers to begin a normal search on eBay, and the company gives the example of searching for a purse. When you see an image of a purse you like, you can search for more listings that include products visually similar to it by dragging and dropping the image of the purse into the search bar. 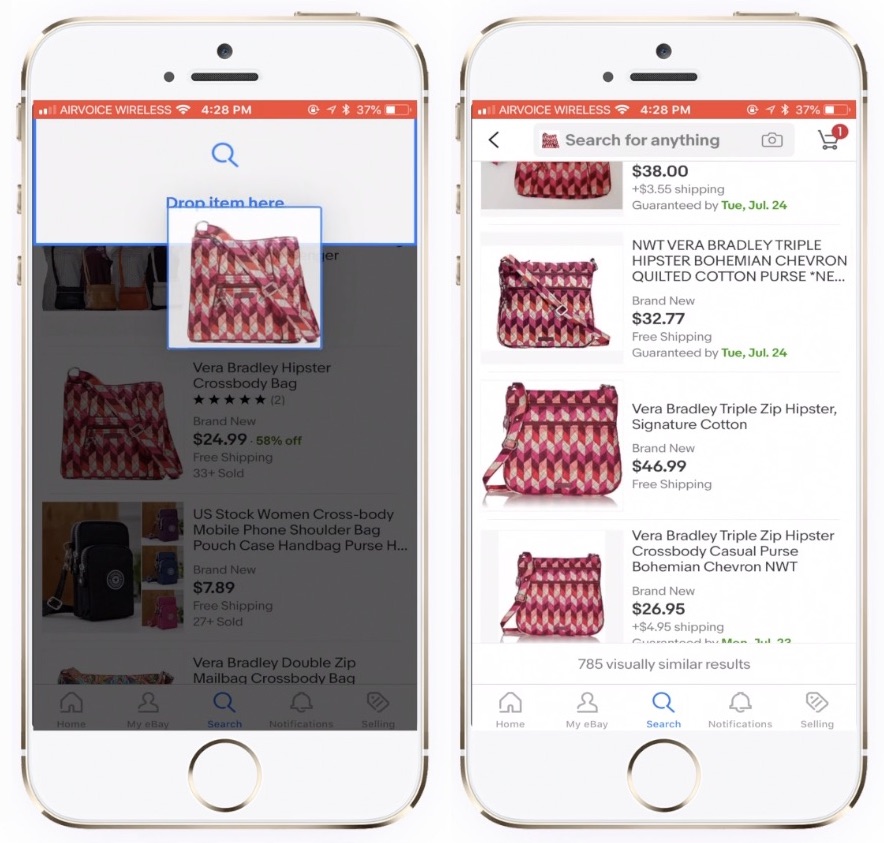 This populates a new search of visually similar results for you to browse, and the company says it should make it easier to find the items you're looking for. eBay's last few iOS updates have been focused on this idea of streamlining the shopping experience and making it easier for customers to sort through the vast amount of items being sold, including a recent Apple Music-inspired "Interests" feature.

Our new visual shopping feature is powered by artificial intelligence. We use deep learning networks known as convolutional neural networks to process your images. Behind the scenes, when you submit your image in the search field, the neural network converts your image into a vector representation. Then, the vector representation of the image that you submit is compared against more than 1.1 billion live listings in eBay's marketplace, using nearest neighbor search. Finally, we surface the best-matched items, ranked by visual similarity.
Click to expand...

The company also just announced this week that it will begin accepting Apple Pay as a payment method later this year. The addition of Apple Pay will hit as eBay undergoes a major payments overhaul beginning in the second half of 2018, kicking off a "small scale" expansion of new payments company Adyen as its primary partner for global payments processing. Adyen will eventually replace PayPal in this role by 2021.

eBay's new visual shopping feature will be available on iOS and Android this August in the United States, United Kingdom, Germany, and Australia.

Not bad, but I'll be impressed if it doesn't get wonky on obscure items.

Didn't anyone notice they just leaked the iPhone SE 2?? No side bezels!!

jclardy said:
Didn't anyone notice they just leaked the iPhone SE 2?? No side bezels!!
Click to expand...

jclardy said:
Didn't anyone notice they just leaked the iPhone SE 2?? No side bezels!!
Click to expand...

Wanted797 said:
Or did someone get lazy and fatten a SE picture to make it look like a 6/7/8
Click to expand...

Also thats a 5s not an SE. The SE does not have the shiny bezels