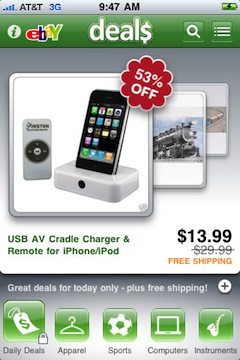 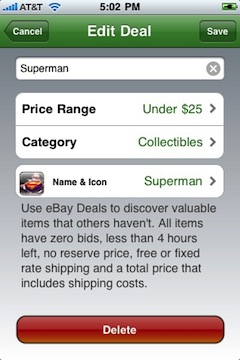 The new eBay Deals app for iPhone presents a constantly changing view of deals across ebay.com, highlighting must-have products in popular categories, such as apparel and games; all listings in the eBay Deals app have less than four hours of listing time remaining, zero bids, no reserve and free/fixed price shipping calculated into the total cost.
Click to expand...

The application comes pre-configured to provide listing from eBay's top eight mobile search categories, and users can customize and save their own deal searches for easy access. eBay Deals also offers Twitter and Facebook integration to allow users to easily share listing with others.

In the announcement, eBay also touts the performance of its eBay Mobile [App Store, Free] application, which has been downloaded over 5 million times. eBay Mobile was updated last week to add Facebook and Twitter integration, support for eBay's "Best Offer" feature, and direct phone connection to customer support.

I can't see it in the (German) AppStore .

edit, ok got it from the us store.
L

Really?! How dumb is that?! Just like Yahoo, and others, eBay could have combined this into their existing app. I don't want yet ANOTHER eBay app on my device! Geez.

If the deals were not fixed price but rather 1 cent listings with no reserve then THAT would be a deal..

I like the direction eBay is going in with these "daily deals." Have bought many items from their "daily deals" listings (woot clone, anyone?).

I do think they should integrate this into their current app. Like Starbucks, having multiple apps is very annoying.
L

Tex-Twil said:
I can't see it in the (German) AppStore .
edit, ok got it from the us store.
Click to expand...

You really got it—or could you only view it?

There is something new in iTunes! A "Change store" button. When you click an App Store link for an app that is not available in your country like this...

...there is a new option that leads you to the U.S. store.

When I click "Change Store" I can see the new eBay app (page). Clicking the "GET APP" button brings up the account/ID/password dialog. I filled it out but clicking on "Download" there just tells me in a dialog box that the item is not available in Austria.

Earlier it was rather complicated to change the store.

Habakuk said:
You really got itor could you only view it?
Click to expand...

I really got it. I created a US account that I use for free apps when they are not available in the german store.
H

Tex-Twil said:
I really got it. I created a US account that I use for free apps when they are not available in the german store.
Click to expand...

Yes. And for promo codes (they are working only in US store). I never created an US account because I am afraid that it messes up something. iTunes is not the most reliable Apple app.

Tex-Twil said:
I really got it. I created a US account that I use for free apps when they are not available in the german store.
Click to expand...

So can you then have a combination of apps from different country stores on one iPhone?

optophobia said:
So can you then have a combination of apps from different country stores on one iPhone?
Click to expand...

i have 2 accounts 1 UK + 1 US i have downloaded Apps from each and they just sync 2 your iphone/itouche when u plug in it! took about 10 minutes 2 setup
U

UrFatMom said:
Nice thread... but not for the app, for the multi country trick As for the app, don't really care...
Click to expand...

right, I just tried the app and deleted it after 5 mins.
Y