I signed up for updates for this product and really thought it would never ship. Looks like Sonnet may yet prove me wrong...

The Echo 15+ has gained a few new features and an all-new enclosure design. As a result of Sonnet now providing support for installing two 2.5-inch drives in all models, all Echo dock models share the Echo 15+ name. This name change does not affect the model you ordered.

Take a look at the recently updated product page with more details on the shipping status countdown.

<yawn> I think Sonnet's boat missed the dock on this one, with all the "development" time.
C

I pretty much gave up on this product too. Looks like a nice device, perfect for my desk. But I've picked up a Startech dock since I pre-ordered the echo years ago, and I now don't really need it. It may clean up some desk cable clutter, but at the $450 entry price, its also going to have to dust and vacuum too
Last edited: Nov 2, 2015

Does anyone know if you can install an ssd and use it as a boot drive?

I already have a caldiget thunderbolt dock, but I would like to get a 1tb ssd and make it the boot disk for my 2011 iMac without opening up the iMac and risking damage.

I am looking into a few options, this would be overkill I think however.

Edit: Nevermind, I see booting is supported in the spec sheet.... 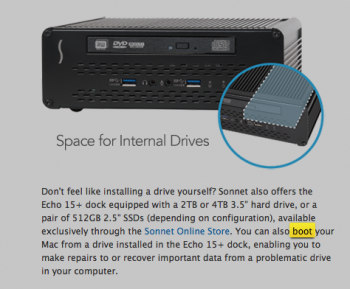 Like so many others, I was ready to hand over my money for this dock when I bought a thunderbolt machine - in this case, the new Mac Pro. So much of my video assets were on FW800 drives, I really wanted that connectivity without losing a TB port. As the first release date approached, I went and bought a 256 GB flash drive to go in it. Well, first it was delayed a few months, then a year. Then the updates seemed to stop. I had preordered, and even called Sonnet a number of times, asking for any parcel of information. They really had nothing more than the outdates statements on the website. So, little by little, I wound up investing in other components - first, the TB>FW800 connectors, which I wanted to replace to free up that lane, then an OWC TB dock, providing me with all the ports I needed, including the FW800. A few weeks ago, I needed to add an optical drive to my setup, and found excellent prices on blu-ray burners that did all the advanced multple-layer and M drives. And then, this week, I get the letter from Sonnet.

Sorry sonnet - too little too late.

What I have may not be as sexy as an all-in one package on a single cable; but the OWC dock is very thin, which connects to the burner and together probably takes up only a slightly larger volume. But the burner has better specs than the one offered on the echo 15 as well. The two together, with a cheap USB 3 hub too, ran around $350. When I compared that to echo 15, and realized there was really no difference in terms of cable management, I realized that what I saved made up for what I lost.

Here is the downside - first, no single sexy box instead of three components. Second, if I want to add flash memory externally, I'll have to find a TB enclosure to get that kind of access speed. A double SSD enclosure? Im sure they are out there but I have yet to find one. That was really the biggest selling point, figuring I would keep a backup system drive in there on one and ultra fast storage for current projects in the other.

But after this long a wait, and the investment many mac owners had to make in other solutions, the only way I would purchase this now is if Sonnet offered people who were on the waiting list for two years a significant (40% +) discount. But since they aren't offering even the slightest incentive to those who's credit card numbers they've held for more than two years, I see no reason to give up my current investment. Its nice that they contacted those of use who were on the preorder list to have us confirm rather than charge the cards and ship it off after years of waiting. I have a sneaking suspicion they aren';t going to be hearing back from most of us.
Reactions: Lazy
C

I received a Echo+ with BluRay player today as a gift. I plan to move the Startech dock over to the server if I can eliminate some USB devices. I'm using a recent rMBP with OS 10.9.5. I inserted it as the first device in the chain and daisy chain a full OWC thunderbay to it. I installed two 1TB Samsung Pro 850s.

Seems solidly built but a little old school clunky mechanically. Seems to be dozens of little screws with 4 or 5 different sizes that need to be removed just to install an internal drive. It is not hard to do, but could have been easier. Its nice they provide a T8 torx wrench for the front panel screws.


It has a fan that it is noisier than I’d like. I may have to replace it with something quieter.


SSDs seem to perform a little better installed in the Sonnet than a recent OWC mini Thunderbay enclosure. Black Magic is showing 361MB/s writes to a 1TB Samsung 840 pro vs 334 MB/s in the OWC enclosure, reads are about the same.


Sleep/wake and shutdown seem to be seamless.


For those that want to unplug and go, an applet provides a one touch eject all drives attached to the box, including those in a downstream TB enclosure.


It charges iOS devices (including iPads) when the mac is sleeping or disconnected but, of course, the Mac wakes up when you unplug or plug in the iOS USB cable.

The BR/DVD drive is much speedier than the USB drives I've used. I have a data application that accesses the drive often, and the responsiveness is a welcome improvement. Also flipping through movie DVD menus is much quicker as well as FF actions.


Haven't had a chance to thoroughly check on the audio, internet or eSATA yet.

Edit: audio does not pop on sleep or shutdown like some well known docks do Seems to work fine but at a lower volume than the Startech. Plugging a audio device (analog or optical) into the front shuts off the rear audio output.

If you are starting from scratch and need a TB dock with a wide variety of interfaces and a two bay drive enclosure, the Echo package may save you a few $$.
Last edited: Nov 4, 2015
C

madgremlin said:
What I have may not be as sexy as an all-in one package on a single cable; but the OWC dock is very thin, which connects to the burner and together probably takes up only a slightly larger volume. But the burner has better specs than the one offered on the echo 15 as well. The two together, with a cheap USB 3 hub too, ran around $350. When I compared that to echo 15, and realized there was really no difference in terms of cable management, I realized that what I saved made up for what I lost.
Click to expand...

Not that it makes much difference to you or others, but I just wanted yo mention that the Echo internal optical drive sits on the TB bus via what seems to be a USB/SATA bridge (shows up in the USB section of the system report). It provides much faster file access, menus, FFF forward type operations than an external USB drive, however. I notice a big difference between the responsiveness and data file reading between my high spec USB optical drive and the internal Echo.