Elon Musk: If You Don't Make It at Tesla, You Go Work at Apple 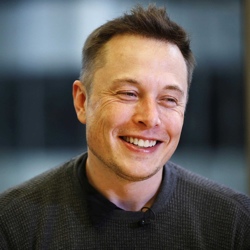 In a new interview with German newspaper Handelsblatt (via Business Insider), Tesla CEO Elon Musk spoke about his thoughts on the much-rumored Apple Car. Additionally, Musk was asked what he thought about Apple hiring away some of Tesla's "most important engineers."

Important engineers? They have hired people we've fired. We always jokingly call Apple the "Tesla Graveyard." If you don't make it at Tesla, you go work at Apple. I'm not kidding.
Click to expand...

Musk was then asked whether he takes Apple's car ambitions seriously, to which he joked "did you ever take a look at the Apple Watch?" He went on to say that it was good Apple was moving toward and investing in a car and that it's the "next logical thing" for the company to offer "significant innovation."

The Tesla CEO went on to poke fun at the newly announced Apple Pencil and iPad Pro, saying that innovation in the form of a new pencil or a bigger iPad are "not relevant enough." However, Musk cautions that cars are far more complex than smartphones and smartwatches. "You can't just go to a supplier like Foxconn and say: Build me a car," Musk told the German newspaper.

Apple and Tesla have hired each other's employees over the course of the last year, with Musk saying that Apple has hired away "very few people" from the car company despite offering $250,000 signing bonuses and 60 percent salary increases to its employees. Tesla has hired nearly 150 Apple employees.

Article Link: Elon Musk: If You Don't Make It at Tesla, You Go Work at Apple

Tesla is everything Apple's automotive arm wants to be.
Reactions: greenmeanie, Shabach!, xSeaside and 26 others
P

Apparently, even Tesla seems to be worried. Good signs.
Reactions: zakarhino, enriquesh96, CooKieMoNs7eR and 82 others

Musk wouldn't be talking **** if he wasn't concerned about Apple's potential car. Makes me think he might know something that the rest of us don't about Apple's plans.
Reactions: zakarhino, CooKieMoNs7eR, mertyz and 59 others

Jeremy1026 said:
Musk wouldn't be talking **** if he wasn't concerned about Apple's potential car. Makes me think he might know something that the rest of us don't about Apple's plans.
Click to expand...

Reminds me of what Balmer said about the iPhone…
Reactions: zakarhino, chitoac, Uofmtiger and 95 others
J

Holy cow. Elon Musk needs to learn to reel it in. This post made me cringe.
Reactions: zakarhino, mdriftmeyer, rstone3 and 49 others
Z

This is gonna be fun!
Reactions: noveneerhere, duffman9000, t1meless1nf1n1t and 6 others

Quite strong opinions he has.
Reactions: iflyer
J

That apple watch that is selling really well. What a horrid analogy he made.

With that statement, he should be worried.
Reactions: rstone3, Liam555, Will do good and 25 others
R

No matter how successful Tesla is, or how great their cars are, Musk's comments display a lack of class.
Reactions: Benjamin Frost, Apple2007, xSeaside and 58 others

It doesn't have to be a bad thing that Apple hires the people who Musk says "couldn't make it at Tesla." As they say, one man's trash is another man's treasure.
Reactions: Apple2007, xSeaside, james126 and 9 others

Roller said:
No matter how successful Tesla is, or how great their cars are, Musk's comments display a lack of class.
Click to expand...

He doesn't need to have class. Steve Jobs didn't have class. He straight out called people bozos if he didn't like them.

Anyway, Musk is Tesla's boss. What do you expect him to say?
Reactions: Dave.UK, greenmeanie, Shabach! and 31 others

This somehow really sounds familiar. Only, last time I heard such words it was about a obscure devices called "iPhone" and they were spoken by a guy called Steve Ballmer…
Reactions: chitoac, xSeaside, WWPD and 13 others
B

What a shocker, a CEO has a huge ego. There is a long line of companies that have underestimated Apple in the past.
Reactions: karthik2809, xizdun, macguru212 and 11 others

He said it like a jerk, but he's right that electric cars are much more meaningful than iToys. Though Apple makes a lot more profit... infinite times as much profit.
Reactions: chitoac, NMBob, Robert.Walter and 1 other person
S

Whenever a company with the size of Apple enters the market, it is not something you can scoff at.

With that said, Elon Musk is not like Ballmer. He is a visionary with amazing drive. It would be an uphill battle for Apple to go against Tesla.
Reactions: codo, tongxinshe, kironin and 10 others

To be fair a design mistake in a car is a bit more serious than an iPhone 4.
Last edited: Oct 8, 2015
Reactions: greenmeanie, rjohnstone, JohnMantooth and 10 others
You must log in or register to reply here.
Share:
Facebook Twitter Reddit Email Share Link
Register on MacRumors! This sidebar will go away, and you'll see fewer ads.
Sign Up
Top Bottom