Development on email management app Mailbox for Mac began earlier this year, with the app entering a limited public beta test back in August. As of today, the app has entered an open beta testing phase, making it available to all users.

Mailbox for Mac is similar in design to Mailbox for iOS, offering a simple, clean interface that aims to help users reach "inbox zero." It includes all of the features of the iOS version, like easy controls to archive and delete emails, snooze functionality, and lists for organizational purposes. 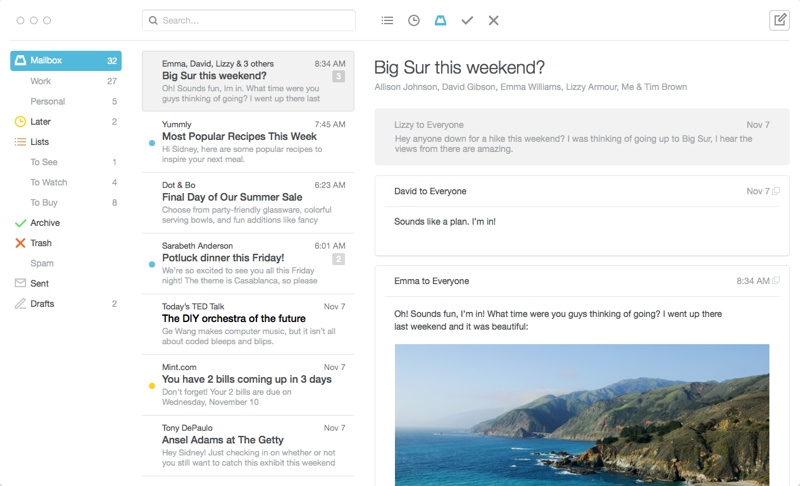 First introduced as an iOS app in 2013, Mailbox proved to be very popular, requiring a reservation system restricting access to a limited number of users for several weeks. Shortly after its release, Mailbox was acquired by file-sharing and storage service Dropbox, and the iOS version has seen several major updates since then.

Better than Gmail? Because I've been forced to use that app now on iOS, since Gmail won't support Push anymore in the iOS mailbox.

Has anyone used the Mac beta? How is it?

I don't have a Gmail account which was required when I tried it last. Is this still the case?

bpeeps said:
Better than Gmail? Because I've been forced to use that app now on iOS, since Gmail won't support Push anymore in the iOS mailbox.
Click to expand...

gmail doesn't support unified inbox the last time i used it (but that was over a year ago). i really like the swipe gestures

Ive been using it for a few months now and enjoy it. I think its just challenges to process all my mail instead of leaving it in the mailbox after I read it. I also a fan of the swipe features very handy.
E

They must have a production IMAP architecture for iCloud, yet it's limited to iCloud. Why?
W

It's really, really not. At least not on the Mac.

It's actually kind of hideous on the Mac.

Also updated iOS today to fix push and optimized for 6/6Plus. Looks so much better and so glad push is finally working again.

impulse462 said:
gmail doesn't support unified inbox the last time i used it (but that was over a year ago). i really like the swipe gestures
Click to expand...

All I want out of my email app is:

I all ready have the beta, but the same way I never got used to the iOS app I'm unable to get used to this one as well. I don't really like the whole "get done with your emails" thing and the "we use our own tag system instead of googles"

Sadly I think the superior mail client for the Mac is sparrow and I've been mad at Google a long time for buying the programmers and shutting it down. They should have brought it into google and continued to make it since they don't have their own client for Mac. It's by far the best Google client I have used. But I know it will end some day and the design all ready start to look stale when I upgrade to Yosemite... If it even works at all.

I would love to hear what people use.
Apples own mail client, how does that one work with multiple gmail accounts and also with contacts. I have no interest in merging all my gmail contacts with my phone book, will mail then be able to autocomplete addresses? And can I search through all my google emails without downloading all my emails?

Also would love if someone could elaborate on what exactly makes mailbox a more convenient way to read emails than sparrow.

Any input is appreciated!

Ps! Recently saw this sparrow for Yosemite. I can only wish that would happen, but sadly no
https://dribbble.com/shots/1589167-Sparrow-Yosemite
A

Does the desktop version still require Mavericks? It's just a mail app, make that thing compatible with older OS version. 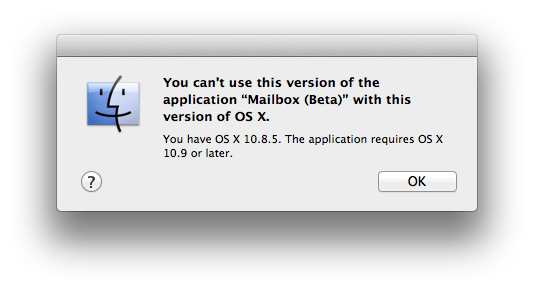 I wish they would support Outlook.com, I've been trying to rid myself of Google as much as possible, annoying to see anytime a new client pops up it seems to be gmail only.

Does 'Mailbox' still route all my mail through their servers?

wimbly said:
It's really, really not. At least not on the Mac.

It's actually kind of hideous on the Mac.
Click to expand...

All I want out of my email app is:

It has all of those things. but multiple gmails and yahoo, not exchange as of yet.
W

Yes, but it's the correct one, in fairness.
Click to expand...

Odd. I got it to run, updated to the latest beta, connected to Dropbox, yet adding my iCloud accounts it states for everyone that my credentials are wrong. Running it on the latest Yosemite GM Candidate.
O

I do love Mailbox on my phone, but every time I try one of these new "minimal" email apps for OS X (I HATED Sparrow), I always end up going back to Mail because it has

- excellent system integration with Calendar and Contacts. I can add/edit contacts instantly right from Mail. I can also add an event to my calendar usually by clicking right on the date, and have it fill in with a lot of the salient info from the email.

- very very fast search. If you're running on a solid state drive, it's as fast as Gmail's search and without regard to internet connectivity.

- smart mailboxes (i.e. saved searches) that, if you set them up right, can really save a lot of time. At work, I have a single one for each person I contact regularly. I click on that person's name, and my whole correspondance history with that person pops up immediately

Minimal is awesome on my phone, but on my computer I want to, you know, get things actually done.


bedifferent said:
Odd. I got it to run, updated to the latest beta, connected to Dropbox, yet adding my iCloud accounts it states for everyone that my credentials are wrong. Running it on the latest Yosemite GM Candidate.
Click to expand...

bedifferent said:
Odd. I got it to run, updated to the latest beta, connected to Dropbox, yet adding my iCloud accounts it states for everyone that my credentials are wrong. Running it on the latest Yosemite GM Candidate.
Click to expand...

Also, I've been using the beta app for a month or so and its ok. I still find I do most of my sorting from my phone since I've gotten used to the swiping on-screen and I typically knock that out away from my desk.
Last edited: Oct 13, 2014
H

They could waste resources doing that or you could just update your computer.

I totally hate the custom interface it has. It feels incredibly un-Mac-like and is counterintuitive compared to just about every app. Hell, I can't even drag 'n' drop an email to another box. I'm forced to use the buttons or swipe. Mailbox for Mac is the perfect example of an iOS experience ported over to the desktop 1:1 and done wrong.

So this does work with iCloud now? I tried the beta but I think it was Gmail only back then. If only Apple would let us choose default apps on our iOS devices. That and a proper file (including iCloud Drive) manager, and split screen multitasking on the iPad are the only remaining "big" features that I want.
3

Doh! Thank you! I completely forgot and that explains it.

wimbly said:
Yes, but it's the correct one, in fairness.
Click to expand...

In *reality* - an opinion is only that... there is no such thing as a "correct" or "incorrect" opinion.

hlfway2anywhere said:
They could waste resources doing that or you could just update your computer.
Click to expand...