Epix has updated its iOS app with a new feature called "Epix Cast," which allows users to beam videos from the service's mobile app to compatible smart TVs and streaming boxes, even if the receiving device doesn't have an Epix app. Notably, Epix Cast allows iOS and Android smartphones to be used normally during a casting, and videos will continue playing "even if the device turns off."

To use the feature, Epix viewers simply have to find a movie to watch in the app, choose the "Tap to TV" button, and select from a list of nearby streaming devices that are connected to their Wi-Fi network to instantly play the selected movie on a bigger screen. When a video is playing the Epix mobile app can act as a remote, a browser to queue up the next movie, and a social feed to discuss the movie with fellow fans. 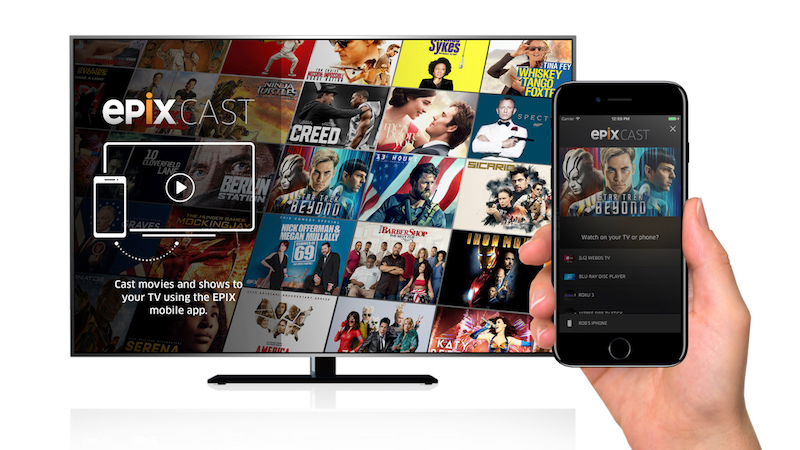 Epix Cast also allows users to seamlessly switch between multiple TVs and devices without having to start a movie over again. In an interview with TechCrunch, Epix chief digital officer Jon Dakss detailed the technology behind the feature, which goes beyond simply mirroring video playing on an iPhone and performs searches online in order to discover "the highest quality version that will work on your TV."

A pioneer in cross-platform viewing, EPIX is again advancing the "TV Everywhere" experience by making it easier for all audiences to enjoy its content on connected TV devices with the touch of a finger on their smart phones. Premium entertainment network EPIX today announced that it has launched EPIX Cast, a new feature that allows users to cast EPIX content from their Apple and Android devices to any connected TV device without the need for additional hardware.

"From the very beginning of the creation of EPIX, our network has been focused on reaching consumers wherever they are, whenever they want and with an experience that is unrivaled in the market today," said Mark Greenberg, EPIX CEO. "With this new feature, we're once again leading the charge on advancing the consumer viewing experience".
Click to expand...

Epix Cast has launched thanks to help from start-up Vizbee, which created the "Vizbee Device Network" to seamlessly connect all video devices in a household and now fuels the new casting feature on Epix.

Epix launched an Apple TV app in February, but incoming support for Epix Cast on Apple's set-top box was not confirmed. Like any use of Epix, users will have to sign in with an existing cable provider that includes the entertainment channel in its package listing. When asked whether the company would launch a standalone subscription model in a similar vein to HBO Now, Dakss neither confirmed nor denied such a move, saying, "It's an area that we continue to explore and look at."

Epix can be downloaded from the iOS App Store for free [Direct Link], and this week's update also includes enhancements to the personalization and communication features of the app.

So why would I use this instead of Plex or Infuse?

Apple should buy this company and integrate such features into its TV app.
2

Wildblood said:
So why would I use this instead of Plex or Infuse?
Click to expand...

Because you won't have to source your own content with EPIX. EPIX is a premium cable channel like HBO.
W