ESPN today announced a redesign of its Apple TV app that brings live streaming auto-play and ESPN Video On Demand to Apple's fourth-generation set-top box. In addition, the app has been rebranded from WatchESPN to simply "the ESPN app."

With live streaming auto-play, users will be able to jump right into the network's stream of sports content with a live video playing immediately when authenticated users launch the app. The new Video On Demand feature will stockpile a collection of user-specific, curated videos that can be browsed and watched at any time, including content from World Series of Poker, X Games, Outside the Lines, and more. 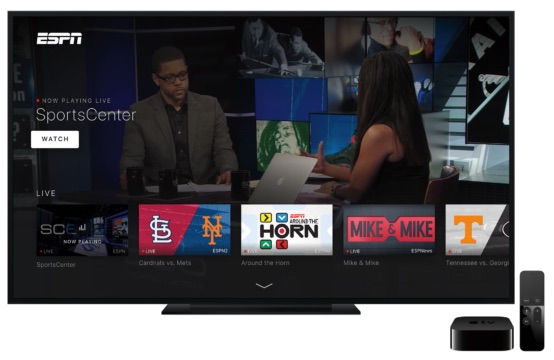 [*]Live Streaming Auto-Play: Upon launching the app, a live stream of one of ESPN's networks will now automatically play for authenticated users.

[*]ESPN Video On Demand: A new collection of curated on-demand videos including hundreds of hours of additional content from 30 for 30, E:60, Outside the Lines, SC Featured, World Series of Poker, X Games and more.

[*]Sleeker, Simpler User Interface: In addition to visual graphic enhancements to Featured content, users can also browse videos by Sports & Events or Channels.
All of the new features are housed in a new UI that boasts "graphic enhancements" to the app's featured content, as well as tweaks to the way videos can be browsed, including search by sport, event, or channel.

"From replays to full episodes of on-demand content prior to their telecast premieres, ESPN's tvOS app is now so much more than our live streaming networks," said Ryan Spoon, senior vice president of digital product, design and audience development, ESPN. "With this latest update, authenticated users now have the full benefit of engaging with a wide range of live and on-demand video content from the very first click into what is now the ESPN App on Apple TV."
Click to expand...

ESPN is launching the new app today, ahead of the premiere of its new multiplatform original series "We the Fans." On April 9, four episodes of the eight-episode show will stream exclusively on ESPN's suite of mobile and tv-based apps two days before premiering on cable.

Does this update fix the problem of ESPN being a terrible network?
Reactions: Lancetx, utwarreng, nburwell and 1 other person
C

Wish I could watch multiple items at once. It is the only good thing about the Fox Sports Go app.

Does this update add ESPN 8 "the Ocho" to their streaming line up?

I didn't even realize they had an Apple TV app. This is cool.

djeeyore25 said:
Does this update fix the problem of ESPN being a terrible network?
Click to expand...

Unfortunately the answer to that question is "negative."
Reactions: Lancetx and djeeyore25

craigmak said:
Wish I could watch multiple items at once. It is the only good thing about the Fox Sports Go app.
Click to expand...

I agree they definitely need to add PIP and multiple streams within the TVos app. Hopefully this is step 1 and they will release it for Fall football time when it is really needed going into the busy fall season.

is it just me, or is the app icon very dim looking? On both of my apple tv's, it looks this way. Almost like it's stuck in a perpetual app update..

Is it me, or does the picture look a lot better than the old watchESPN App? I am watching Pardon The Interruption right and it is crystal clear AND the bottom line is smooth as can be. In my opinion they tweaked something. Probably went to 60fps. Enjoy everyone!

This app is on the UK app store and has been for months. Load it up and it instantly blocks you with a message that the service isn't available to anyone outside the US. I wish somebody at Apple would either tell them it isn't working and have them fix it or removed form the UK app store because as it is it is completely useless.
You must log in or register to reply here.
Share:
Facebook Twitter Reddit Email Share Link
Register on MacRumors! This sidebar will go away, and you'll see fewer ads.
Sign Up
Top Bottom