So I have a Mac Mini 2014 model with a terabyte spinning disk in it. I've found I only use it occasionally because when I wake it up it just takes SO LONG to get to a point where I can do anything with it. I just hear the drive churn and churn, so I decided to get an SSD for it.

After looking at how to install one, I opted for an external. USB3 since buying a Thunderbolt 2 drive would set me back about the same amount as a new computer. Anyway, my plan was to run the system off the external and use the internal disk for my music library and photos (and a separate spinning external for Time Machine.)

The disks are coming today and I realized that I've never actually done this before and I'm not quite sure how to proceed. Yeah, I know there are guides on this but the tricky bit is how do I keep my libraries on the separate disk. I can't clone the whole drive, right? It won't fit on the SSD with the photos and music. Any tips from people who have done this?

Any tips would be helpful!

I have always just cloned full drives with Carbon Copy when moving, but it will allow you to only clone the items that you want to the SSD.

See this article for info on moving your iTunes library: http://www.ilounge.com/index.php/articles/comments/moving-your-itunes-library-to-a-new-hard-drive/

I would want two good backups of the original drive before doing anything.

I just did this with my 2012, and the difference is amazing, even keeping the SSD external and using an enclosure to USB 3.0 for it -- still getting up to 430 MB/s speeds -- about 5-6x faster than the spinner it came with. Folders snap open instantly and apps are launched almost immediately. Like you, I was daunted by the relative complexity of swapping out an HDD on this model and decided external was almost as fast and didn't risk bricking a still very useful and somewhat valuable piece of hardware (especially with a quad i7 that still has substantial market value), and it wasn't quite worth it to me (as of now) to pay a pro to do it. It would probably be a little faster if installed internally, but not much, and to me the reward wasn't worth the risk -- and I'm not new to doing my own computer maintenance and upgrading.

I just installed a fresh copy of Sierra on the SSD, then used Time Machine to pull over my user folders and a couple of games into my Applications folder (that can benefit from loading from SSD). And over time I'm finding other things I want to move over as well, with other apps and data storage on a spinner. I have 2x1 TB spinners in my Mini, and one of them still boots the OS, apps that are less speed-critical, and an older copy of my Users folders, as a backup if my SSD goes south. I am using the second spinner as a Time Machine backup for my SSD installation now.
Last edited: Jun 16, 2017
Reactions: Celerondon

ziggy29 said:
I just did this with my 2012, and the difference is amazing, even keeping the SSD external and using an enclosure to USB 3.0 for it -- still getting up to 430 MB/s speeds -- about 5-6x faster than the spinner it came with.
Click to expand...

So did I. Upgraded my 2012 base mini to 16gb, added a 500gb Samsung T3 external SSD, did a clean install of Sierra and gave it to my daughter's family for Christmas. They love it, it feels very responsive now. This is how it performs: 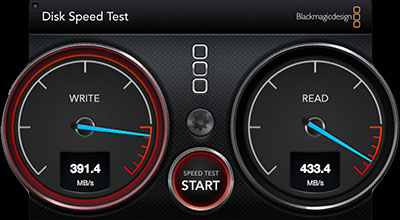 Are you really getting 5 to 6 times faster throughput than the original drive? The original 500gb HD in my base mini clocks at 100MB/sec so the external SSD is more like 4 times faster (which is still a huge difference).

FWIW, I also have a 2012 quad i7 2.6 mini with the original Apple sm256e SSD. It is significantly faster than the external drive - especially noticeable with a boot time of about 14 seconds for the internal vs 30 seconds for the external). However I agree that it's too much of a can of worms opening these things up. Here is what I get with the original Apple internal SSD. 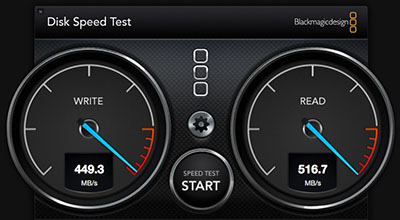 The 2014 mini has a faster interface so the difference between internal and external should be even greater. I think it is more like the SSD in my 2013 MacBook Air that clocks at more than 700MB/sec.

Boyd01 said:
Are you really getting 5 to 6 times faster throughput than the original drive? The original 500gb HD in my base mini clocks at 100MB/sec so the external SSD is more like 4 times faster (which is still a huge difference).
Click to expand...

And I know this drive -- a 500 GB Samsung EVO 850 -- is rated for about 530 MB/sec, and that another 100 MB/s is significant but not worth the risk to me considering how many steps there are in taking things apart, putting them back together, and hoping to not brick it in the process.
Reactions: Celerondon and Boyd01

OP:
You said that you've already placed the order and the SSD is coming, is that right?
If so, what I suggest below might help.

Before you do anything, you need to sit back and think for a moment.
Important questions:
How much disk space is currently used on your INTERNAL drive?
How large is the SSD that you will be using?

IF you can move stuff from the HDD to the SSD and have room left over, the easiest way to do it will be:
1. Download CarbonCopyCloner from http://www.bombich.com/download.html
CCC is FREE to download and it's FREE to use for 30 days.
2. When the SSD arrives, connect it and initialize it with DIsk Utility (HFS+ with journaling enabled)
3. Now launch CCC. Put your source drive (HDD) on the left, and to the right of it put the target (the new SSD). Then let CCC "do its thing". CCC will even offer to "clone over" the recovery partition, and yes, you want to do this.
4. After CCC has finished, go to the Startup Disk preference pane and set the SSD to be the boot drive.
You should now be able to reboot to the SSD and it will look exactly as your old internal drive did.

IMPORTANT! IMPORTANT!
IF you have "too much stuff" on the HDD, and it won't fit onto the SSD, you can still use CCC, but you have to select what to "leave behind".
Notice in the lower left hand corner of CCC, there is a "checklist" where you can DE-select stuff that won't be cloned.
Usually, the "offending folders" will be the "Movies", "Music" and "Pictures" folders in your home folder (if you use them).
I would suggest that you UNCHECK these, and see how much space that leaves you.
You can still easily access these folders (using iMovie, iTunes, Photos or iPhoto) as "referenced folders", and those apps will run as well as they did before.

With an SSD, one has to be a bit "choosy" regarding what to keep and what to leave behind.
But it's EASY to "manage that second drive" on the desktop.
Once you get used to it, you'll know "where things belong"...

Let us know how you make out.

That is horrible! Is that the original factory-installed 1TB disk? Was it always that slow, or has it just become fragmented over time?

Boyd01 said:
That is horrible! Is that the original factory-installed 1TB disk? Was it always that slow, or has it just become fragmented over time?
Click to expand...

Yes. It is the original 2x1TB configuration on the 2012 Mac Mini Server. I originally had it using 1 of them to run Mac OS and the other to run Windows through Boot Camp. Now that I have a dedicated Windows gaming rig, I don't need the Windows install on my Mac any more. I'm going to use that disk as a Time Machine backup drive instead.

Sorry to start the thread and then vanish, I thought this would email me when I got replies. Obviously not!

I ended up doing a fresh install to the SSD and then just pointed Photos and iTunes to my folders on my internal disk. It acts like a new computer. Clicking on an app before use to have it bounce for a full minute before it even started to draw windows. Now the apps don't even bounce, they just open. It's amazing and I recommend this to anyone who still uses a spinning drive.
Reactions: Fishrrman and Boyd01
You must log in or register to reply here.

D
Mac mini for iTunes and iPhoto only

Mac mini 128SSD - should I use external drive to boot?