Hi, I've purchased a Mac Mini and would like to keep the previous computer's hard drive. I know I can purchase an external enclosure and simply connect that hard drive via Firewire. Is there somewhere I can purchase one of these enclosures to use match my Mac Mini without buying the ones that already have a hard drive? Any suggestions? Thanks!

You need a miniStack 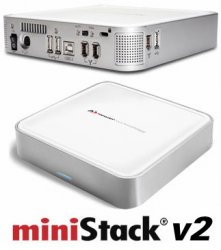 Ah, very nice. I was aware of that product, but not that it was available without the hard drive.

Also, the hard drive I will be using was used in a previous Windows XP PC. Will that cause any problems? And can I simply clean out those Windows files when I set it up? Thanks.
C

If the disk is FAT32, you'll be able to read/write to the disk, but keep in mind FAT32 is limited to 2 GB file sizes. Also, it may have issues with Mac files you store on there, stripping out resource fork and other weirdnesses.

If the disk is NTFS, you'll only be able to read from it (out of the box.) There is a driver called NTFS-3G and MacFuse that'll let you read/write NTFS formatted disks with apparently no problems on OS X. But the driver is still in development, and as such, there's the possibility it'll hose your data.

If you intend to only use it in OS X, then I'd suggest reformatting it as HFS+, and if you still want to occasionally use it under Windows, there's some (commercial) packages that can do that (MacDisk and TransMac.)
G

I think, ultimately, I will burn the data I want to keep to DVD from this hard drive and then do whatever I need to to make it work with the Mac Mini. It sounds like once I've got what I need off the hard drive, then I can just re-format the drive to be compatible with Mac. Is that correct?
C

Yes, use Disk Utility to partition and format it.
G

Is Disk Utility a Mac app? Also, what does partitioning the external drive do for me? Thanks!
C

Disk Utility is in the Applications/Utilities folder. It's for checking disks, partitioning, formating, making disk images.