Facebook today announced plans to add human curation to its Facebook Events feature on iOS devices, with designated curators set to highlight notable events in a select number of cities.

Facebook Events, for those unfamiliar, is the Facebook feature that allows users to create dedicated Facebook event pages for parties, festivals, and more, and sign up to attend those events. Event pages are a useful way to share event details with a large number of people, including time, location, and information on others who are attending. 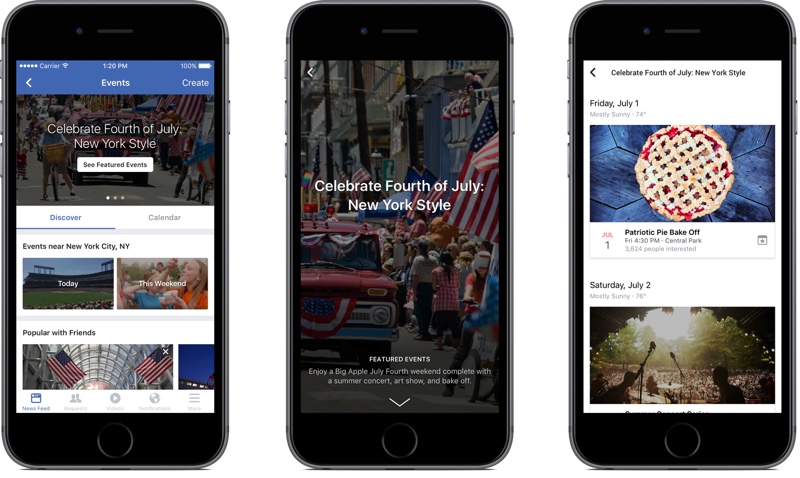 "You can think about it like a weekend or weekly digest of cool stuff that you can do in your city" Facebook Events product manager Aditya Koolwal tells [TechCrunch].
Click to expand...

Curated Featured Events will join existing event suggestions Facebook users receive, which have included events based on interest, past attendance, and friend attendance. Facebook's goal with Featured Events is to surface events early enough to give people time to plan to attend.

Facebook is also enhancing its Events section with new event categories that include things like "Music," "Food," "The Weekend," and more. While Facebook's new Curated Events feature is only available in a limited number of cities, Facebook may consider expanding it in the future should it prove popular.

I hope they fixed the constant crashing on iOS 10

I like this idea. I never know about interesting things happening in Boston until it's too late.

ArtOfWarfare said:
I like this idea. I never know about interesting things happening in Boston until it's too late.
Click to expand...

I have a hard time imagining that a big city like Boston doesn't have access to several apps and portals that would send you alerts based on interests, no? :/

As for Facebook, seems like a cool idea really. Human curation can be worth quite a lot, even when algorithms often find what would otherwise fly under the radar.

rudychidiac said:
I hope they fixed the constant crashing on iOS 10
Click to expand...

You're running iOS 10 Developer Beta 1 - you should expect that some apps/functionality won't work for a while.
Reactions: keysofanxiety, Keane16, zooby and 3 others
I

bradkrischel said:
You're running iOS 10 Developer Beta 1 - you should expect that some apps/functionality won't work for a while.
Click to expand...

Easy there champ.... Nothing wrong with hoping
B

iLoveiTunes said:
Easy there champ.... Nothing wrong with hoping
Click to expand...

Nothing wrong with hoping at all. Just stating the obvious in case someone is considering installing the first developer build on their phone with hopes that everything will work as if it were a GM release.
Reactions: Keane16 and zooby

Great... Now you'll be able to track where the flash mobs are looting and can join in. Right?

Instead of new features, can you fix the Most Recent view on the timeline?
C

Huskoner said:
Instead of new features, can you fix the Most Recent view on the timeline?
Click to expand...

Native iPad Pro!! What the hell. It's been almost 10 months and we still have to suffer through a small-res app that's blown up all fuzzy like.
S

It's interesting how a decade ago having computers and algorithms do all the thinking was all the rage. Now, it's considered advanced and posh to have humans once again curating content.

Facebook needs this to provide support for their creepy "people you may know" feature:

bradkrischel said:
You're running iOS 10 Developer Beta 1 - you should expect that some apps/functionality won't work for a while.
Click to expand...