Facebook CEO Mark Zuckerberg today introduced a new home screen experience for Android devices. The company is trying to flip the user experience on phones so users will navigate their phone "through people, not apps".

During the question-and-answer session after the event, Zuckerberg said bringing Home to iOS would not be as easy as with Android and would have to happen via the company's existing partnership with Apple. Because Android is 'open', Facebook isn't required to work with Google on the project.

Instead of seeing an app icon or name, Facebook has designed all interactions to focus on individual people rather than keeping emails and text messages from the same friends separate. 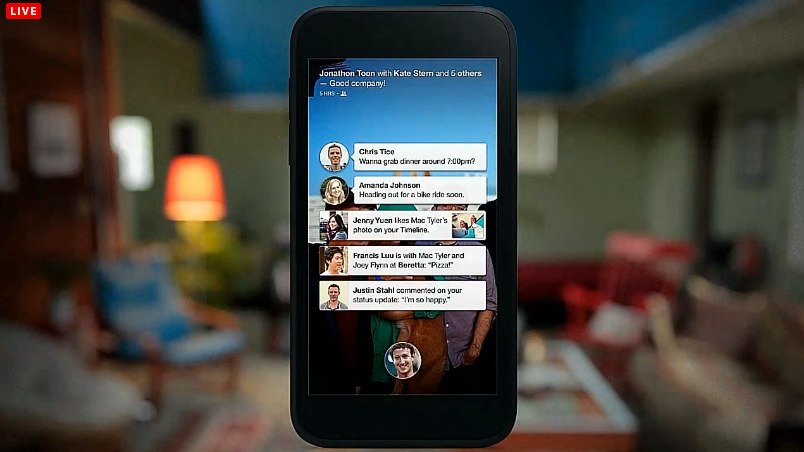 Facebook claims users turn on their phone 100 times per day, and, among other things, is redoing the lock screen on the Android phone to give users a slideshow of photos and updates from their Facebook News Feeds.

'Home' includes another new feature called 'chat heads', allowing users to keep their ongoing SMS and Facebook messages on top of every app on the phone for easy access. The company is putting a huge amount of emphasis on 'content' and 'people' rather than 'apps', and, as a result, Facebook has put itself in the middle of everything the user does on their phone. 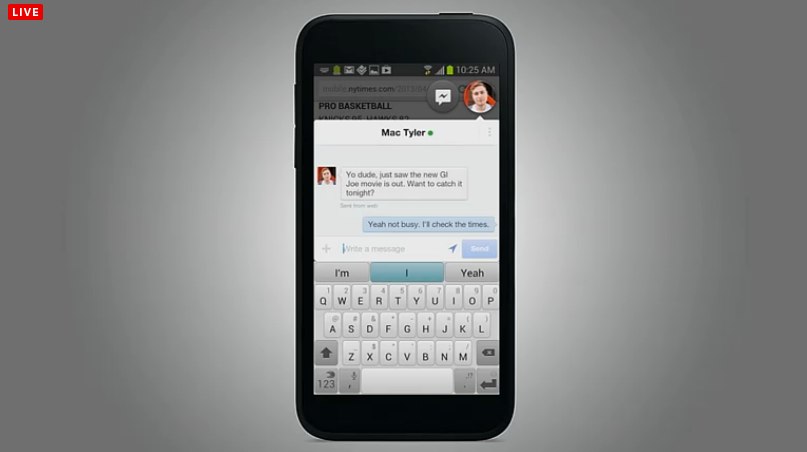 Additionally, Facebook is offering a program for carriers and device makers to bundle Facebook Home into devices from the factory. HTC and AT&T are the first companies to sign on, with the 'HTC First' coming out April 12 for $100.

so is the pic of Zuck the home icon or does it make farting sounds when you press it?
N

I'm watching the livestream and it looks pretty nice! Great job, Facebook! They haven't announced a phone yet. They are just discussing Home now. Sucks that I don't have FB though.

That looks like an utter nightmare. I use my phone as a tool more than a social hub. Call me crazy.
D

So much for all those 'OMG Facebook phone!' rumours lol

So when everyone changes their profile photo to whatever the "cause" of the week is it will get real confusing.

I don't believe it.

Yay, a home button with Zuckerburg's face on it! Sweet!

Seems a lot of the friends/information centric thinking behind this is not so different from the Live Tile/social centric Windows Phone.

If you think of your phone principally as a portal to Facebook then this is for you. Otherwise it's a UI layer you have to muscle your way past to do whatever non-FB thing it was you were planning on doing.
F

nfl46 said:
I'm watching the livestream and it looks pretty nice! Great job, Facebook! They haven't announced a phone yet. They are just discussing Home now. Sucks that I don't have FB though.
Click to expand...

A clever means of combining email, sms, contacts and phonecalls into the one 'Facebook' app.
That said I wouldn't touch it with a ten foot pole and it looks half-baked. The only way I can see this taking off is if Facebook subsidise phones with their custom home screen.
T

I don't have/like/want Android, the UI looks hideous and I hate Facebook as much as the people I have on it so...

This is pointless unless you're nosy and sit 24/7 on Facebook, and want to see what everyone's doing at any given time.
T

I think this will be successful. I'm positive FB will push this launcher via their app and website - it won't be like you would have to actively search for this in the Play Store.

I just opened both accounts and immediately closed them. I use email and phone to communicate with my distant friends.
W

Lame. An announcement for this was unnecessary.

thelink said:
I don't believe it.
Click to expand...

thats me probably in an hour ...
N