Facebook is testing a new mobile app feature called Instant Videos that downloads video clips for later viewing whenever a user's phone is connected to Wi-Fi, to save from burning through their mobile data plan.

First spotted by The Next Web's Matt Navarra and later confirmed by TechCrunch, the feature will identify pre-loaded and cached videos in the news feed with a lightning bolt icon so that users know they can watch them for free while on the go. 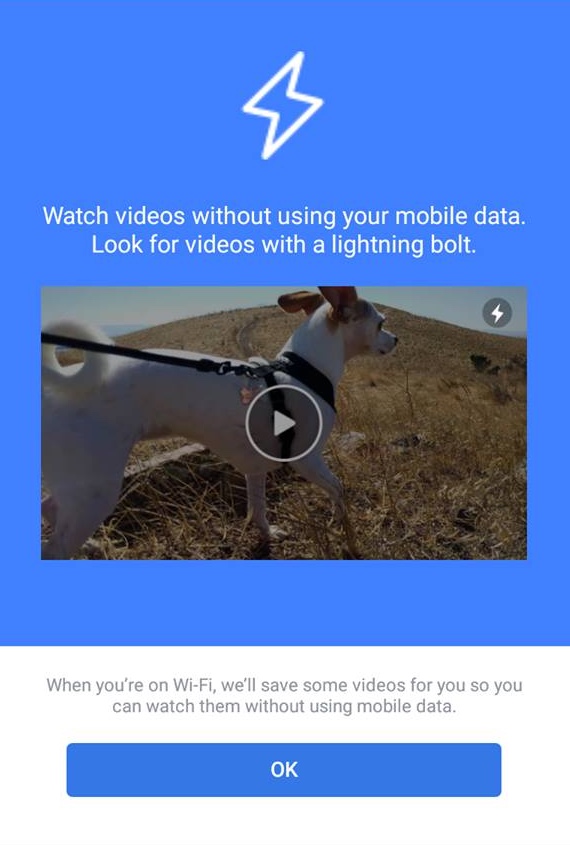 The Instant Video feature is in a similar vein to Facebook's Instant Articles, the hosted content format that loads much faster than mobile websites and negates the need to wait for a separate web app to load the content. Likewise, publishers could see the new feature as a way to get their video clips maximum exposure on the social network.

The feature could also benefit Facebook's own original content push, with video organized under the new Watch tab, allowing users to cache episodes for viewing on their daily commute.

According to TechCrunch, the Instant Video test is currently only available to a small number of Android users, as the company lays the groundwork for more budget-conscious users in the developing world. But it's likely the feature will eventually make its way over to Facebook's iPhone app if the mini rollout is deemed successful.

so instead they'll burn through ISP data caps
Reactions: Cameroncafe10a, jdillings and Yvan256

Facebook app is already one of the worst for ballooning cache size with no way of clearing it (other than un/reinstall app).
Reactions: Cameroncafe10a, bb_referee, paddad64 and 5 others
C

I have no doubt the lightning bolts will appear on ads.
Reactions: bb_referee, paddad64, alex00100 and 2 others

Facebook app is already one of the worst for ballooning cache size with no way of clearing it (other than un/reinstall app).
Click to expand...

Agreed. Between that and the battery-sucking performance, I long ago deleted the Facebook app from my phone and replaced it with a saved Safari web link. On the rare occasion, I need to check Facebook on my phone, I just use the web link.
Reactions: Cameroncafe10a, Moonjumper, CarlJ and 6 others

thisisnotmyname said:
so instead they'll burn through ISP data caps
Click to expand...

If your phone is gonna download it either way, why not do so from a source that allows far more data?

People often complain of Facebook using a lot of storage on their devices. I'm sure this won't help that situation.
Reactions: Cameroncafe10a and paddad64

If your phone is gonna download it either way, why not do so from a source that allows far more data?
Click to expand...

I'm well aware, I was being sarcastic. In any case it doesn't affect me as I'm one of those edgy hipsters* who is too cool** to have a Facebook account.

*not really edgy or a hipster
** or that cool if I'm being honest
Reactions: jhfenton and jef82

Me: Why can't I watch this video I want to see?
Facebook: We are downloading videos you didn't ask for and will only see the first few seconds of because we autoplay them when you scroll past.

Me: Why can't I download this app update?
Facebook: We used all your storage saving videos you didn't want to watch.

Me: Why can't I watch this video you autodownload to my phone?
Facebook: Sorry, we we busy putting bee's in your car.
Reactions: Cameroncafe10a, bb_referee, Moonjumper and 3 others
D

No one wants videos from you facebook. Go home, you're drunk.