Signs of Facebook's silent testing of new features for its mobile app appear to be continuing apace, after some users noticed a rocket ship-shaped icon appearing at the bottom of their news feed.

(Image from iOS app via Wired)​
The icon has been appearing from time to time at the bottom of the iOS app's main news feed icon and displays a different type of feed made up of posts, articles, photos, and videos from sources users haven't followed, like Facebook Pages or posts from news media organizations, for example.

A lot of the content that shows up in the rocket feed appears to be sourced locally, suggesting the feature may rely on live location information. Some posts have been spotted that are directly relevant to users' interests, such as content from pages that are similar to those users have liked, so it's possible the content stream is being selectively weighted by algorithms based on likes, friends, and groups. 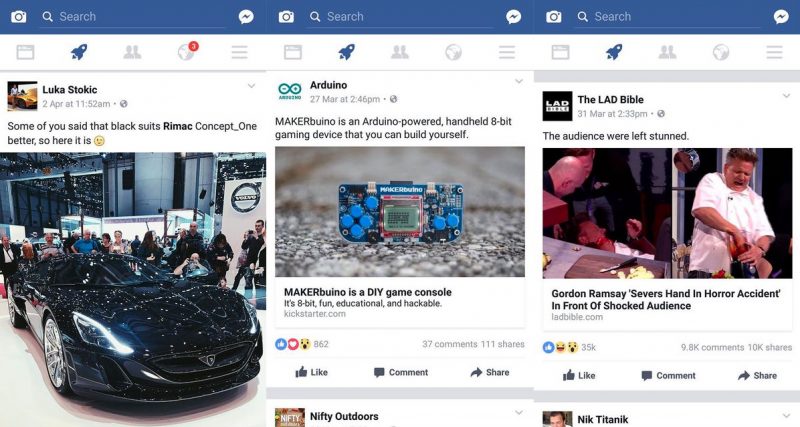 (Image from Android app via Stan Schroeder/Mashable)​
It's unclear if the feature will ever get an official rollout to all mobile users - Facebook has a habit of trialing features just to see if they prove popular among a select few. Last month, the company began testing "Facebook Stories", a Snapchat feature clone that lets users post a time-limited photo or video at the top of the Facebook app.

i had a rocket ship for a few days. Looked at it and moved on.
Now i went back to look for it and they have taken it away
Comment