Following in the footsteps of Apple and Spotify, Facebook will launch its own podcast platform offering next week, based on emails seen by The Verge. 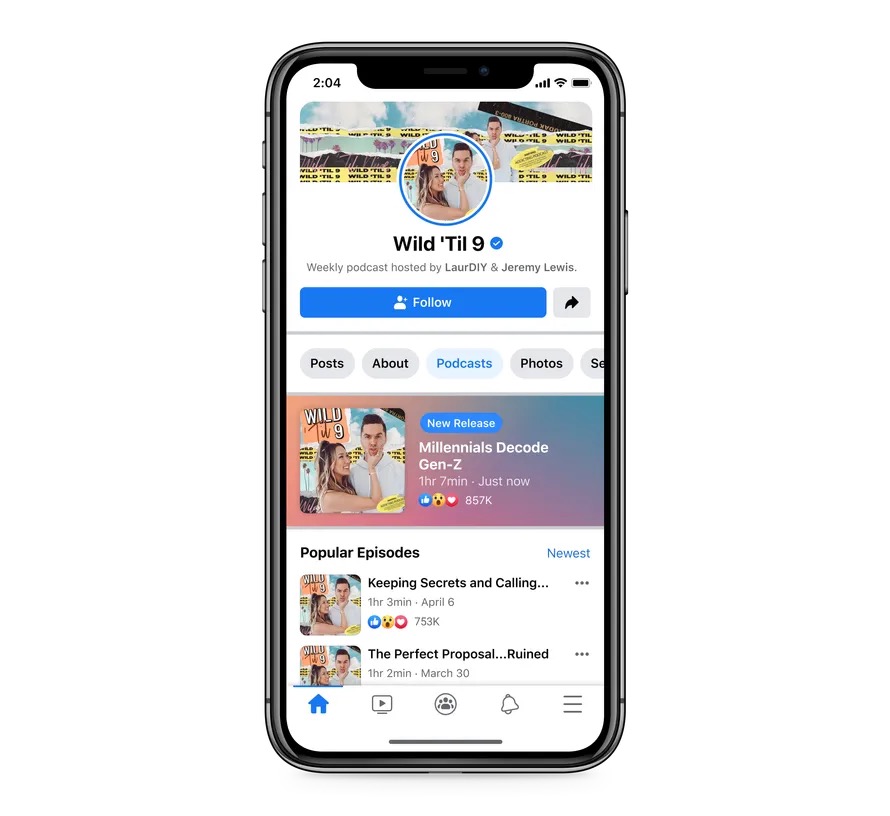 According to the messages, which were sent to podcast page owners, Facebook will roll out the podcast service on June 22, and content creators will be able to link their show's RSS feed to Facebook, which will generate News Feed posts for all subsequent episodes.

"Facebook will be the place where people can enjoy, discuss, and share the podcasts they love with each other," said the company in the emails.

Podcast episodes will appear in a forthcoming "Podcasts" tab, which was teased by the company in April. Facebook will also offer podcast creators an optional feature that lets listeners create clips of shows of up to one minute in length for sharing.

The move follows growing interest in podcasts as another potential market of original content, with Apple recently launching its own paid subscriptions service in the Podcasts app. Apple takes 30% of all subscription revenue that creators generate in their first year on the platform, and after that, Apple takes a 15% cut.

Spotify has invested heavily in deals to exclusively distribute podcast shows in recent years, and offers a similar podcast subscription feature to Apple, except the streaming service doesn't collect revenue on any of the content it hosts.

Nice try to collect consumer's data lol, the first thing Facebook needs to understand is how important privacy is.


Runaway, people! don't fall for it.
Reactions: hortod1, Apple_Robert, CarlJ and 10 others

Can’t wait to use scumbook new scumcast, not!!!🙄
Reactions: michaelnugent, TheYayAreaLiving, Premium1 and 1 other person

I wonder who they will buy. Facebook has shown that they are willing to censor non-extreme speech on their platform, so I wonder what kind of principled podcaster would sign with them.
Reactions: geekymcfly, kc9hzn, michaelnugent and 2 others

Zawinski's law 2021: Every platform attempts to expand until it can host podcasts.
Reactions: Vanilla35, CarlJ, geekymcfly and 4 others

They're trying to drag more content in to they can put ads in front and behind it. I've seen that before with podshow and mevio. Most podcasters I know already have tools to post their shows/episodes into facebook anyway.
Reactions: CarlJ and kc9hzn

Podcasts were good while they lasted. Soon we will need 5 or 6 apps in order to listen to everything we were able to listen to in one app only a year ago.

I only use Apple Podcasts. If I can't listen through the Podcasts app they I won't bother with anything else. I suppose it won't be long until podcasts I listen too put up paywalls as well, thanks to podcast subscriptions.
Reactions: motulist

Notice to myself: don‘t forget to blacklist this in pihole…
Reactions: icanhazmac and EyeTack

Honestly I'm surprised they haven't don't this earlier. As a horrific data mining and privacy sucking monster, this is a smart move by Facebook. I do look forward to a day where the company doesn't exist however.
Reactions: elliotsen, CarlJ, Snake111 and 5 others

The Cancer continues to metastasize. Facebook users are such Sheep.
Reactions: TheYayAreaLiving
J

Looking forward to tuning into Mark’s show ‘How I’m Zucking You’
Reactions: CarlJ and tranceking26

People use Facebook for the same reason Youtube is the top video streaming app. It is the space where most users are. End of story. Any new ventures are dead in the water due to lack of trust in the name.
Reactions: decypher44

Too late and too many dollars short.

yadmonkey said:
I wonder who they will buy. Facebook has shown that they are willing to censor non-extreme speech on their platform, so I wonder what kind of principled podcaster would sign with them.
Click to expand...

People that only talk about extremely “safe” topics or virtue signal like no other.
Reactions: icanhazmac

I get a big smile on my face every time I read about Facebook. Deleting my account was one of the best tech decisions I’ve ever made.
Reactions: motulist and huge_apple_fangirl
S


Runaway, people! don't fall for it.
Click to expand...

Simmer down. Not everyone is as paranoid.
Reactions: Razorpit, Amon Ra, Absolute Trainwreck and 3 others
K

I don’t really think Facebook realizes their branding issue. The problem is, when you hear Facebook, do you really think “video calling” (see Portal), VR Gaming (see Oculus, though they’ve wisely retained the Oculus branding), YouTube-like video content, or podcasting? No, not really, you tend to think more along the lines of social media and staying in contact with friends and family (but not friends so close that you call them up and talk to them). That’s why Messenger worked so well as a brand extension. It’s also why Instagram and WhatsApp worked well as acquisitions (but Facebook retained both of those brands as separate brands, which also helped). Spotify makes some sense for podcasts, at least if you’re already using it as your music platform and don’t have a podcast platform you use.

I don’t really see myself, say, opening Facebook, seeing the latest podcast episode in my newsfeed, then going “oh, let’s listen” (especially if you can’t do other things in the Facebook app when a podcast is playing without leaving the podcast episode). Most of the podcast episodes I listen to usually are at least a half hour, and most Facebook content typically takes less than 3 minutes to consume, so I’d imagine interest in longer-form video drops off after the 3 minute mark on Facebook Watch, and the same would likely happen with podcasts. Plus, with the algorithmic shaping Facebook does on the newsfeed, I feel like you’d probably easily miss some of your latest podcast episodes. It’s just not a brand extension that works all that well. Increasingly, Facebook is turning into Google (in the “let’s throw stuff at the wall and see if it sticks” department, they were already there in the privacy department).

Why would there be any reason for people to use this over Apple Podcasts or literally anything else
Reactions: Razorpit
K

WaffleBoi_15 said:
Why would there be any reason for people to use this over Apple Podcasts or literally anything else
Click to expand...

There really isn’t one, and it looks like Facebook is just trying its hand at everything just to stay relevant. Among teen users, the drivers of future social media growth, Facebook is “that social media app my parents and grandparents use”.
Z

Gee, thanks Facebook, lets do this first before you ****ing turn on Darkmode on the IPAD app. ****in losers.

cube4ever said:
Zawinski's law 2021: Every platform attempts to expand until it can host podcasts.
Click to expand...

Internet Points awarded. A commendable update on the original.

Public Service is where you get podcasts. As for other platforms/content creators? No thanks.
4