Facebook Working on Tech That Will Let You Type Texts, Emails, and Status Updates Using Your Brain

During its F8 Developers Conference in San Jose, California this week, social media company Facebook revealed an ongoing project in which it aims to launch a product that will allow users to send emails, texts, and post status updates using only their thoughts (via Reuters).

Conducted in a new wing it calls "Building 8," Facebook said that any final hardware launch is a few years away, but it's believed that the company is looking at the new product as a way to diversify its income so it might not have to rely so heavily on advertising revenue. 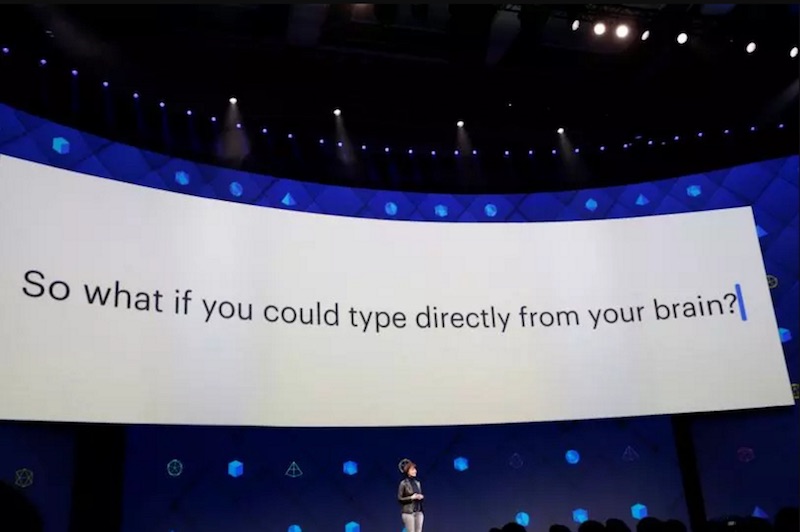 Former Google executive and DARPA director Regina Dugan is leading Facebook's new initiative, which ultimately aims to allow users to type at 100 words per minute by monitoring their brain waves. Current technology allows researchers to type at eight words per minute, but it requires a brain implant. Facebook's solution, on the other hand, will be non-invasive.

Additionally, Facebook is working on a way for users to "hear through their skin." Beyond launching as an easier way to access Facebook and other content on smartphones, both technologies could see a huge surge in users who are deaf and disabled, or act as a way to break down the language barrier. "One day, not so far away, it may be possible for me to think in Mandarin and for you to feel it instantly in Spanish," Dugan said.

On Facebook, Dugan shared a few details about the "silent speech interface" projects:

Over the next 2 years, we will be building systems that demonstrate the capability to type at 100 wpm by decoding neural activity devoted to speech. Just as you take many photos and decide to share some of them, so too, you have many thoughts and decide to share some of them in the form of the spoken word. It is these words, words that you have already decided to send to the speech center of your brain, that we seek to turn into text. And unlike other approaches, ours will be focused on developing a non-invasive system that could one day become a speech prosthetic for people with communication disorders or a new means for input to AR. Even something as simple as a 'yes/no' brain click, or a 'brain mouse' would be transformative.

We also described a system that may one day allow you to hear through your skin. You have 2 square meters of skin on your body, packed with sensors, and wired to your brain. In the 19th century, Braille taught us that we could interpret small bumps on a surface as language. Since then many techniques have emerged that illustrate our brain's ability to reconstruct language from components. Today we demonstrated an artificial cochlea of sorts and the beginnings of a new a 'haptic vocabulary'.
And we're just getting started...
Click to expand...

Other products and initiatives mentioned during the F8 conference included "clear, fashionable AR glasses that don't obscure eyes," internet connectivity in disaster zones, and a pair of new three-dimensional cameras. These last few projects are said to be more near term, while the thought-to-text and skin-listening technology are both "years away" from an end-user launch.

When asked if Facebook has any plans to build a voice assistant of its own for its iOS and Android apps, David Marcus, Facebook's VP of messaging products, told Variety this week, "We are not working on that actively right now." The company is instead focusing on bolstering its chat bot, "M" for Facebook Messenger, because it believes that users are more inclined to use text inputs to control their smartphones over their voice, particularly in crowded public situations.

Article Link: Facebook Working on Tech That Will Let You Type Texts, Emails, and Status Updates Using Your Brain

Good grief. If anything is going to get me into trouble, it's sending out my actual thoughts before they've managed to be filtered.
Reactions: Lopov Jack, Susurs, GrumpyMom and 26 others
Comment

Hope that tech is a one-way street.
I'd hate to have an ad for next-gen cat litter boxes pop into my head every 15 minutes.
Reactions: Vanilla35, tnsmart, XTheLancerX and 8 others
Comment

Very cool idea, but I think it's a prime example of tech trying to go too far.
Reactions: ex0dus1985, augustrushrox, PowerBook-G5 and 4 others
Comment

"Facebook Working on Tech That Will Let You Type Texts, Emails, and Status Updates Using Your Brain" implies most people currently post status updates without using their brain
Reactions: iDento, GubbyMan, Col4bin and 23 others
Comment

Oh boy, Facebook wants to connect to my brain, what could possibly go wrong?

Maybe they'll introduce a new section in your FB-timeline: "friends who thought this also thought..."
Reactions: ex0dus1985, GrumpyMom, Vanilla35 and 13 others
Comment

adrianlondon said:
"Facebook Working on Tech That Will Let You Type Texts, Emails, and Status Updates Using Your Brain" implies most people currently post status updates without using their brain
Click to expand...

Facebook's solution, on the other hand, will be non-invasive.
Click to expand...

I never would have expected this alignment of words.

And it isn't 1st April.
Reactions: MartiNZ and djbuddha
Comment

Implants are coming. Maybe it's time for me to launch a new startup.
Comment

Yep, to much of effort to type cople of lines of status update!! It sounds perfect for an Wall-e world!
Comment

This could be pretty awesome. Right now, the issue with wearables isn't the output so much as the input. Either its too small to manipulate with your hands, or you have to broadcast what you're doing to everyone around you by saying it aloud. Being able to read your thoughts sounds like a pretty perfect input method, to me.
Comment

I wanna f...I mean, hey how you doing?
Reactions: GrumpyMom, Vanilla35, MartiNZ and 4 others
Comment
A

outside the crazy house, NC

It would probably make the online experience a lot better too.
Reactions: GrumpyMom and freediverx
Comment

Just more PR fluff aimed at propping up the stock price.
It has a name in the industry: VAPORWARE.
Reactions: Vanilla35
Comment
A

Get ready for 'thought crimes'

But having Facebook hooked up to my brain? No thanks.

Worst idea ever. Of all the companies or organisations out there, Facebook is about the last one I would want to have any kind of direct access to my thoughts.

So much potential for abuse.

Nothing short of making this compulsory would get me to use this.
Reactions: Col4bin and XTheLancerX
Comment

decimortis said:
Hope that tech is a one-way street.
I'd hate to have an ad for next-gen cat litter boxes pop into my head every 15 minutes.
Click to expand...

If you are old enough to remember cat commercials are haunting like that.


Now have fun with that for the day.
Reactions: GrumpyMom
Comment
M