Facebook today announced that the Live Video feature it introduced in December is now available to all iPhone users in the United States, with plans to roll it out to the rest of the world in the coming weeks.

Facebook's built-in Live Video feature is designed to compete with live streaming services like Periscope and Meerkat, which allow people to share in-the-moment video through iOS apps. Live Video on Facebook can be used to share streaming video with friends and family members directly in their Facebook news feeds. 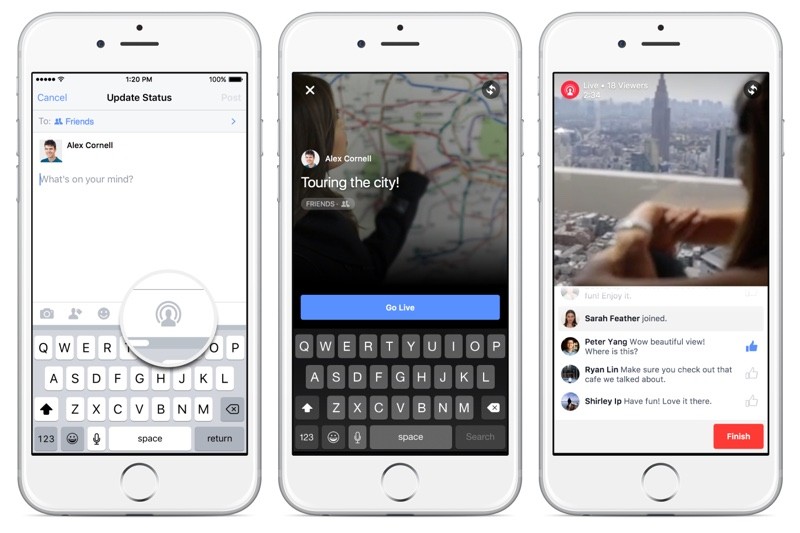 Sharing Live Video can be done by tapping on the Update Status button on an iPhone and then choosing the Live Video icon. Live Video can be limited to a select audience of Facebook friends, and it can be accompanied by a text status update. While streaming, it includes information such as the number of live viewers, the name of friends who are viewing the stream, and real-time comments. Completed Live Videos remain visible in a user's Timeline.

Facebook for iOS can be downloaded from the App Store for free. [Direct Link]

This is great, does anyone know if the video is saved after the streaming is complete? Very useful if you're getting harassed by someone, etc. Instant evidence!
Comment
2

Stopped using Facebook a while ago. A friend told me that people keep tagging me so there are still pictures on my wall. Wonder if any of them are live? Need to check...
Comment

Cuban Missles said:
Stopped using Facebook a while ago. A friend told me that people keep tagging me so there are still pictures on my wall. Wonder if any of them are live? Need to check...
Click to expand...

This is for Live Video broadcasting (like Periscope/Meerkat), not Apple's Live Photos. I initially thought the same thing and tried to upload a Live Photo and did not see the live photo icon.

Not to mention that I just checked and don't have the Live VIDEO option either yet.....so I guess it's still rolling out.
Comment
J

Nicky G said:
This is great, does anyone know if the video is saved after the streaming is complete? Very useful if you're getting harassed by someone, etc. Instant evidence!
Click to expand...

so you mean i have to download the FB app? i've been using Paper since it launched. grrrr
Comment
K

I still can't see this when I try to update my status... am I missing something?
Comment
B

This is something Apple should have built directly into iOS just as they should have done with Instagram.
Comment

CrAkD said:
I did it tonight pretty cool and yes the live video is saved to your wall once you stop broadcasting
Click to expand...

What happens if you interrupt the recording, without properly ending the stream. Does it properly record the file anyway?
Comment

Tried with VPN but no luck..it's working towards your gps location i think

Now if there was only a way to take an external video feed and broadcast it through this service.

Where I work (a church) we broadcast our services live via a CDN, complete with live switching of 4 camera shots. It'd be nice to take that same feed and broadcast it into Facebook as well.
Comment

Do you guys know if this works with an Ipod at all?