The FCC today launched a new ad-free FCC Speed Test app for iOS devices, designed to measure mobile broadband performance. The app is an expansion of the Measuring Broadband America program, which aims to measure both fixed and mobile broadband to "bring greater clarity and competition to the broadband service marketplace."

Like other mobile speed testing apps, the FCC's app analyzes mobile broadband performance (both Wi-Fi and cellular) and displays a breakdown of download and upload speed, latency, and packet loss. It also keeps a historical record of mobile speeds for comparison of performance over time. 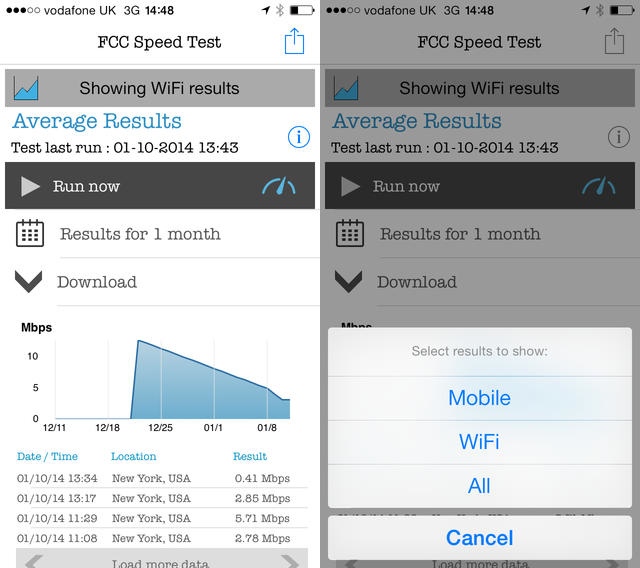 The FCC is using data collected from the app to build an aggregated map of mobile broadband performance across the country, but it does not collect personally identifying information aside from carrier, country code, and GPS location.

Privacy is paramount. The FCC has taken significant measures to ensure the privacy and confidentiality of volunteers for this program. Using privacy measures developed and reviewed by a diverse team of privacy experts, any data that could potentially identify specific smartphones is analyzed and processed to ensure privacy protection.
Click to expand...

The FCC previously launched an FCC Speed Test app for Android back in November and has published multiple reports on broadband performance as part of Measuring Broadband America.

FCC Speed Test can be downloaded from the App Store for free. [Direct Link]

Hideous, but I don't expect much from a government app.
Comment

Speedtest.net is the best and always will be.
Comment
L

Not sure why they needed to develop an app, all they need to do is ask the NSA.
Comment
F

losthorse said:
I wonder what sort of Easter Eggs the NSA has hidden in this little gem...

and I wonder why Vodafone is the example used on a U.S. government app :/
Click to expand...

I noticed that too. Vodafone UK 3G, yet the tests are for New York? Something is clearly not right here. I mean 3G? Really?
Comment

They're referring to the Speedtest.net iPhone app.
Comment
D

Am I alone in thinking this app already existed?
Comment

Yes, of all the speed benchmarking apps out there, let's use the one that openly transmits data to the Federal government. What a good idea.
Comment
V

davidwarren said:
Am I alone in thinking this app already existed?
Click to expand...

I had this app for years.

I only just recently deleted it because they turned off the servers the old version tested against.

This one is just an updated version of the older one. Not a new thing at all.
Comment
C

Kabeyun said:
Yes, of all the speed benchmarking apps out there, let's use the one that openly transmits data to the Federal government. What a good idea.
Click to expand...

Kabeyun said:
Yes, of all the speed benchmarking apps out there, let's use the one that openly transmits data to the Federal government. What a good idea.
Click to expand...

Actually, it's a brilliant idea. Net neutrality is super important. Unless you work for Verizon...
Comment

Any ideas why the FCC app shows my wifi speeds @ 10-15 MBPS slower than Speedtest?
Comment

This app sucks as an app and I don't think it's right. It was telling me I was getting 1.91 download so I tried speedtest and it told me I was getting 2.78 and that's what it shoul be I'm always right around 2.80 download.


Dear Google
I really really could use google fiber so I can stop crying myself to sleep every night.
Comment
S

Why is the FCC collecting Wifi performance data? That data is meaningless since performance of routers vary so widely and has nothing to do with anything.
Comment

joelvega125 said:
Any ideas why the FCC app shows my wifi speeds @ 10-15 MBPS slower than Speedtest?
Click to expand...

Your ISP hasn't caught on yet. Don't worry soon enough they will. Then you'll magically be getting max Mbps when your connection otherwise sucks.
Comment
V

sransari said:
Why is the FCC collecting Wifi performance data? That data is meaningless since performance of routers vary so widely and has nothing to do with anything.
Click to expand...

Graciously yours by the NSA and GCHQ (which explains the UK mobile network).
Comment

sransari said:
Why is the FCC collecting Wifi performance data? That data is meaningless since performance of routers vary so widely and has nothing to do with anything.
Click to expand...

Because if they didn't, wifi results would get mixed in with mobile results?

If they got enough data, the wifi results may be informing somehow to someone?

joelvega125 said:
Any ideas why the FCC app shows my wifi speeds @ 10-15 MBPS slower than Speedtest?
Click to expand...

Because Speedtest increases results for those with ISPs that pay them. They want to make you're results look better.

Source: Worked for Time Warner and Comcast and know how things were setup very well.

Wat? 802.11b has a theoretical max of 11 Mbps. You'll never get that speed with it because you have to factor in a million different things like TCP/IP overhead, signal quality/interference, and much more. The standard speed offered by Comcast is 25Mbps and Time Warner is 15Mbps. And those are just the very basic speeds you get with the cheap package. They offer speeds over 100Mbps which even 802.11n will struggle with unless configured correctly (NAT and DHCP can cause issues with getting optimal speeds, among other changes).

So no, most ISPs do not struggle to supply speeds faster than what most wifi can support. Maybe 5+ years ago.
Comment
M