I have FCPX on my 2009 Mac Pro (see pic) updated to 3.2 but didn't do any real work since v10.2.4.
While transferring projects, a while ago, to my new installation I deleted all rendered, optimized and proxy files since there is no need to transfer ≈300GB project instead of 20GB one.

So I fired it up, loaded project and let it do the rendering. After few minutes I got back to the Mac just to see message Your system has run out of application memory and the only thing I could do is Force Quit FCPX.
Here are screenshots I've taken before quitting 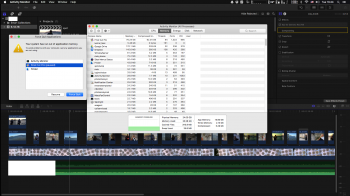 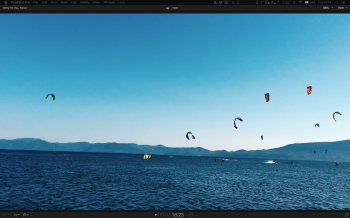 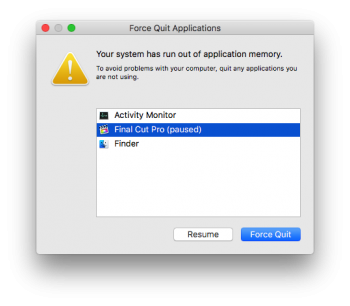 As you can see Activity Monitor was reporting FCPX memory usage of 76GB memory (62GB compressed) .
Here are spec of my cMP 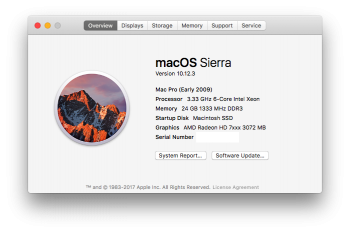 GPU is R9 280X but at the moment I'm using stock UEFI rom since I'm booting into Win10 EFI installation.
OS in on SATA SSD and Project is on 2TB HDD RAID 0.
Ive done similar projects on cMP1,1 with HD6850 GPU, 8GB of RAM and 1TB HDD not so long ago and had no such problems. As you can see on the on second screen, project is 1080p so no real strain on the current config.
Any idea what I'm doing wrong if it isn't just some bug with FCPX or Sierra?

Definitely looks like a bug. It's eating a solid 80GB of RAM!

You're running the latest OS and (I assume) the latest version of FCPX? I'm just wondering if the problem persists when you're loading up an older project made on an earlier version of FCPX, or if the issue also occurs when creating a new project?

The only possible thing I can think of... maybe... is that you have loads and loads and loads of previously imported content in your collections and somehow some bug somewhere causes... something to happen. But even so that wouldn't directly cause the problem as it's not a known issue.

looks like a bug - maybe some (old) plugin/effect running wild?

Thank you so much, great ideas!

keysofanxiety said:
You're running the latest OS and (I assume) the latest version of FCPX?
Click to expand...

keysofanxiety said:
I'm just wondering if the problem persists when you're loading up an older project made on an earlier version of FCPX, or if the issue also occurs when creating a new project?
Click to expand...

Unfortunately I cannot load this project intro older FCPX version, since I didn't make a copy of it before running last version of FCPX. But ill be sure to make one more with same source files (ill just make same length, size and apply same effects) as soon as I grab some time for it and see if the problem persist.
Lastly, ill try the same thing in older version because I did quite a few projects in OS X 10.11.6 and FCPX 10.2.3 without any problems and with memory usage of just few GB's. It would be a lot of work reverting to El Capitan if it turns out that Sierra is the responsible for it.
[doublepost=1487693077][/doublepost]

Ill try that too, first disabling plugins in project itself and then uninstalling them all.
I'm now really intrigued in solving this because everything I could find online about similar issues are connected to older versions of Premiere Pro, not FCPX.
R

My son had several issues with latest FCPX a few weeks ago that required force quit in order to resume; he was quite frustrated. Not being much of a techie he didn't really do any troubleshooting so I have no idea if there was an issue with memory usage but the problem was resolved by updating to latest version of OSX.

Doesn't sound like that's the issue for you as you seem to be up to date.

I was going to suggest he run the disk repair utility but the problem was resolved before I had a chance to suggest it.

Have you tried deleting FCPX preferences? This has helped me before when I was having persistent crashing.

There's also other suggestions in this Apple Support article: https://support.apple.com/en-gb/HT203477

maybe export project with xtml https://support.apple.com/kb/PH12654?locale=en_US
then take that in to the old version of FCX?

Thank you all for the replies and great ideas and sorry for not answering any sooner.
I have to finish some project with a friend so i had to put Mavericks back on for the time being (because of older Audio Interfaces and drivers for them that don't work past 10.9.5).

In the short time i had to test your ideas, it seems that old(er) plugin is causing those memory leaks, so i hope everything is ok with Sierra and latest FCPX. The one i managed to isolate is Koji Color and i'm 99% sure that it is causing the problems because i saw that they advertise on their website Sierra ready update.
I will report back as soon as i get back to Sierra, but i managed to try and run as much FCPX effects and stabilization on the same clips before, without Koji, and all wen't well for more that half and hour. FCPX never 'took' more than 3GB of RAM. 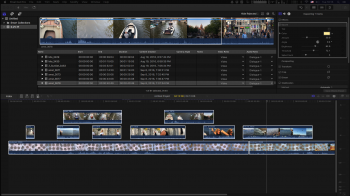 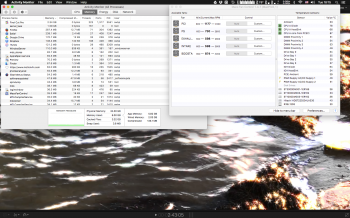