PROMISE Technology is now shipping its Thunderbolt 2 RAID systems ahead of the new Mac Pro's promised December release. The arrays were first announced back in October but are now available through a number of retail channels.

The Pegasus2 line of RAID arrays allow for simultaneous transfer and display of 3D and 4K video files. They work with the new MacBook Pro with Retina display released in October, as well as the new Mac Pro when it launches later this month. 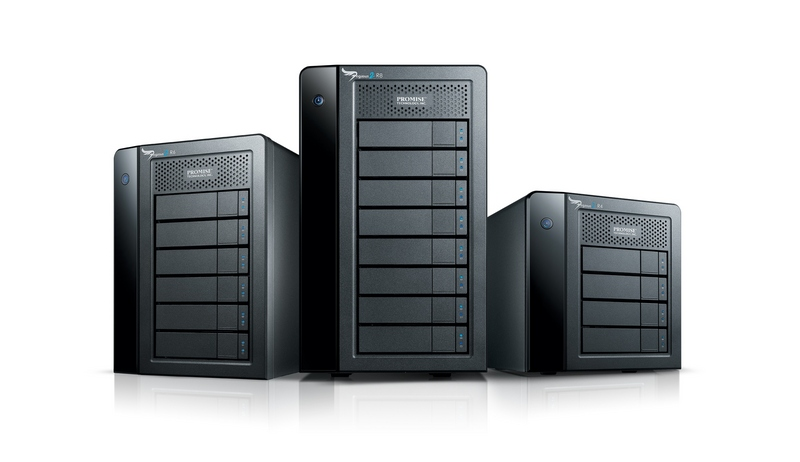 "Pegasus2 is truly one-of-a-kind, as there has never before been a storage solution that offered such an incredible combination of performance, mobility, and simplicity," said James Lee, CEO, PROMISE Technology. "We are thrilled that Pegasus2 is the first storage solution available with Thunderbolt 2 -- this further illustrates PROMISE's position as a leader in Thunderbolt technology."
Click to expand...

The Pegasus 2 is available in 4-bay, 6-bay, and 8-bay configurations with 8TB, 12TB, 18TB, 24TB and 32TB capacities through the Apple Online Store and elsewhere. Pricing ranges from $1,499 to $4,599, though some retailers are offering modest discounts off PROMISE's MSRP.

The new Mac Pro, which will include six Thunderbolt 2 ports, is expected to begin shipping later this month.

It should be round and same radius than the new MacPro ... than you could stack them ....
S

Too bad the new iMac can't take advantage of these Thunderbolt2 drives.
B

How does it compare to a DroboPRO?

What kind of drives come in this array? Are they flash or normal HD?

Where is the best place to buy them (lease expensive) assuming they are the best solution out there...

How does it compare to a drobo pro or to some of the other Drobos with flash drives?

Someone please correct my ignorance: what's the point of Thunderbolt 2 being used with hard drives if the drives have read/write speeds significantly slower than the throughput capable of T2?

I use my own drives....small, silent, works incredibly well....
U

SJism23 said:
Someone please correct my ignorance: what's the point of Thunderbolt 2 being used with hard drives if the drives have read/write speeds significantly slower than the throughput capable of T2?
Click to expand...

If it's RAID then the theoretical read/write speed can be doubled or even quadrupled, justifying the need for Thunderbolt 2. But you're absolutely right in implying that you'll be hard-pressed to notice the difference in real-world use.
A

If you don't know why you'd buy this, then you don't need it. If you do need it, you'd realise why it's priced as it is.

Luckily I don't need it, so my bank balance survives another day (barely). Hurrah!
D

Pretty slow on the 4TB drives but that's what you would expect on the type or rather size of that drive. I'd imagine when 6TB drives come out it will be no better. Which is why having 8 of them should make up (if in RAID 0) for its slow rpm with raw data thru put. Should be fast enough to handle what it says it does.

However, setting this up with some SSD's would be pretty impressive to witness.

And yes, I know there is no redundancy with RAID 0. Just stating it as its the fastest way to go with such slow drives. They should start making fusion drives with that kind of space. Would help a lot.
B

If you want it to perform well you'd go with the Promise.

Did the same thing in our lab, we fired off an email to Promise asking them for a diskless version, however were told nope. We purchased a few Drobo's and put in our own drives.

Promise has lost customers left right & centre because of their choice to screw customers by pushing over priced storage in their boxes.
C

Stay away from promise

Not sure of this line they have, but the DS4600 you can't get parts for it if it breaks. They want you to buy a whole new unit!

Mine was a couple of months out of warranty and it wouldn't turn on anymore. The main board was bad. Called them and they wouldn't help me, answer I got was to buy a who new unit. So a $50 part would be $400 for a whole unit. Even under warranty, they just ship you a whole new unit.

Makes me mad because the only reason I bought it was because Apple uses them and the manual said to contact them for parts and showed how easy it was to take apart. But they won't sell you parts! After you have 8TB filled and it crashes you are screwed!!

Stay away!! Stay away from Promise and contact manufacture on other units about parts availability before purchasing!!
Last edited: Dec 11, 2013
5

Did you read the article?

keysofanxiety said:
If you don't know why you'd buy this, then you don't need it. If you do need it, you'd realise why it's priced as it is.
Click to expand...

This a lazy response that reeks of elitist snobbery and does nothing to answer the question asked.
I

I am not sure why they even need 20Gbps Thunderbolt on these devices. It´s not like you can saturate that with the included drives in most of these configurations. You would need enterprise level spindles or SSDs instead. And the prices are ridiculous.
B

iSunrise said:
I am not sure why they even need 20Gbps Thunderbolt on these devices. It´s not like you can saturate that with the included drives. You would need enterprise level spindles or SSDs instead.
Click to expand...

RAID 0 on the r8 would probably get you about 1200 MB/s on paper. Plus 4K passthrough for displays.

Plus the new one is black to match the Mac Pro which is by far the most important attribute for working professionals.

keysofanxiety said:
If it's RAID then the theoretical read/write speed can be doubled or even quadrupled, justifying the need for Thunderbolt 2. But you're absolutely right in implying that you'll be hard-pressed to notice the difference in real-world use.
Click to expand...

You could quadruple the speed of the fastest HDDs and they'd not only be beaten by a single 6Gb/s SSD but would, at most, only saturate a single SATA 6Gb/s channel worth of bandwidth because they only hit over 100Mb/s using sustained transfers and as these systems will likely be used in RAID 5, RAID 50 or some proprietary hybrid RAID configuration, they'll be even less impressive.

If these were half the price, they might be worth it but like Thunderbolt RAID systems, they're a waste of money compared with their USB 3.0 equivalent and for some uses, their Gigiabit equivalent too.
M

keysofanxiety said:
If it's RAID then the theoretical read/write speed can be doubled or even quadrupled, justifying the need for Thunderbolt 2. But you're absolutely right in implying that you'll be hard-pressed to notice the difference in real-world use.
Click to expand...

It's a small market of professionals who really need to work with such massive files from RAID systems.

You're paying for a better RAID controller that scales well with more hard drives, plus the known reliability from the brand name. You're not the intended market if you're confused.

Creative Pros are streaming huge 4K videos/images for editing in real time via those RAID systems. Those pros tend to pay the big bucks, same pros who pays for Mac Pros.
Drobo are for regular customers who don't need faster speed that'll decline the more hard drive you add to the same RAID system.