Valve Software first hinted at the arrival of Steam for Mac in early March through the release of a number of leaked teaser images. Steam is a very popular digital distribution system for PC games and will be making its debut on Mac on May 12th. Alongside the release of Steam will be several Valve gaming titles that have never previously been seen on the Mac. We've had some hands on time with the late beta, and here are some impressions.

PC users, or Mac owners with Boot Camp, will feel at home with the client. Its simple interface is mostly unchanged in the Mac beta version. Tabs indicating its essential functions line the top of its window, displaying the virtual "Store," your "Library" of games, patch and update "News," and "Community" functionality. Invitations from friends, as well as advertisements for games, still pop up with the speed and appearance of a Growl notification. In fact, the entire program is smooth and fast. It works and, most importantly, without a hitch.

Steam for Macintosh and Steam for PC are married via "Steam Play." This feature allows you free access to any Mac ports of PC games you've already purchased through the service. Games like Portal and Team Fortress 2 support this option, while several more are sure to come.

And keep in mind that this sort of cross-platform approach is something the Valve crew is seemingly taking seriously. Team Fortress 2 Mac owners like me have been playing with PC owners of the game on their very same servers during this latter end of the beta. I expect more of this in the future.

On a tangential note: the Steam cloud also keeps all of your information in-line between the two versions. Friends, profile and Library data is shared between both. I'm told that Steam for Mac, though, will have a specific Library option that displays what games you can play on the platform. It's currently not in the beta.

The Games So Far

Portal and Team Fortress 2 feel and play like their PC counterparts, though they may not look quite the same for all users. I, for example, had to do a bit of software-side tweaking to achieve fluid experiences: my 15" Macbook Pro -- rocking the integrated NVIDIA GeForce 9400M video card only, 4 Gigs of RAM, and 2.53 GHz Intel Core 2 Duo -- couldn't handle either game on its "High" settings. Keep in mind that integrated graphics represent the low-end of graphics hardware and those with discrete chipsets should fare much better.

Team Fortress 2 in particular needed to be brought down to its lowest lows in order to run well. But even at this point, the game retains its characteristic charm -- both in terms of the over-the-top, manic multiplayer action and presentation.

I'm not sure if these two titles are the best indicators of what Valve is doing with their ports, though: they're both old titles. In the near future Valve will be adding in Mac functionality to Left 4 Dead 2 and its predecessor, as well as the Half-Life series and Counter-Strike: Source. These games should give us a better idea of what to expect. As of now, though, I'm left with the impression of promise and the minor satisfaction of playing games that I've played on multiple platforms natively on my Macintosh. 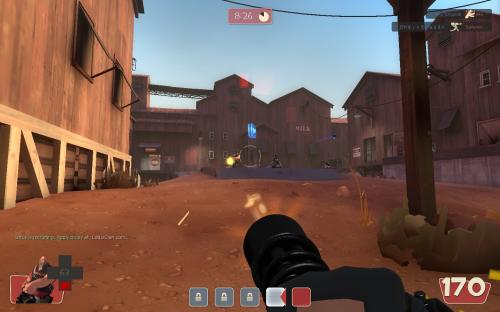 Gamepad support, despite it being listed in the options menus for games, is not something the beta has. I was told by Valve earlier that this support is definitely on their to-do list.

Other developers might have their own to-do lists, too. As of right now, only one other developer, Tripwire Interactive, have pledged support. That developer is releasing Mac versions of Red Orchestra Ostfront 41-45 and Killing Floor.

While there hasn't been much to ogle over with the Mac beta of Steam, I still can't stop smiling. There's a lot to like with the functionality of Team Fortress 2 and Portal, and a lot to enjoy from Valve's native-support of the platform. Games will continue to hit on the service as it grows and grows, and we'll be direct beneficiaries of its current -- and hopefully future -- dominance as more publishers join the fray. Valve need only to convince publishers that Mac owners are consumers.

Steam for Mac should become publicly available on May 12th.

Article Link: First Impressions of Steam for Mac Including Portal and Team Fortress 2

This is really cool. One more step towards people not being able to say you can't play games on the mac.
Comment
M

Surely us X3100 owners could get something? I'm fine with ultra-low, so long as I can play Portal!
Comment

I really hope Counter Strike Source will be available for Mac!
Comment

so does anyone know the status of counter strike source?? used to play on the pc...cant wait to continue playing on my mac!!
Comment

"Crosses fingers that its not just another half assed port like the Console ports.

From the TF2 screen shot the lighting has a noticeable difference. I wonder if the developers of Defense Grid will port it to mac. Its a really good quality TD game.

EDIT: Just noticed that it was on low settings.
Comment

At least it should be playable instead of rockin' the high 10s for FPS in crossover.
Comment
S

Portal and TF2 have been running great on my i7 MBP (330M GT). Portal gets a constant 60fps, with a drop (not too noticeable, just to 40-30fps) when you look into an open portal. TF2 runs great, but I didn't check the FPS for it. I can't wait till it goes public. I really want to replay Half Life 2.

Both games on medium-high settings.

I'm told that Steam for Mac, though, will have a specific Library option that displays what games you can play on the platform. It's currently not in the beta.
Click to expand...

Yes, it is. Click on Library, and there's a popup next to "show" allowing you to filter only Mac games.

Here is a full list of all the games coming. In addition to that, Civ IV and expansions appeared briefly but then wen't away, so its status is up in the air.

People should only expect TF2 and Portal on Wednesday, (plus third party stuff) as the other games haven't been beta tested. I seriously doubt we will see HL2 or CS:S.
Comment
S

Cougarcat said:
Yes, it is. Click on Library, and there's a popup next to "show" allowing you to filter only Mac games.
Click to expand...

Might as well give you a screenshot for that.

Reading this review makes me a very impatient person... Come on May 12th and TF2!!
Comment
A

Hopefully Apple can get 10.6.4 out before then. I was excited about the StarCraft 2 Beta client finally coming out mac side, and was quite dismayed at the difference there was when I played it under boot camp, and then under OS X. This has made me quite the skeptic until then... I can't wait for Wednesday, but I hope it's not the same letdown in performance.
Comment

Cougarcat said:
Yes, it is. Click on Library, and there's a popup next to "show" allowing you to filter only Mac games.

Here is a full list of all the games coming. In addition to that, Civ IV and expansions appeared briefly but then wen't away, so its status is up in the air.

People should only expect TF2 and Portal on Wednesday, (plus third party stuff) as the other games haven't been beta tested. I seriously doubt we will see HL2 or CS:S.
Click to expand...

HL2 and CSS are already available for download through the beta client. I assume they will be available to play come 12 May 8:00am-9:00pm PVT "Pacific Valve Time."
Comment
J

9400m can't even do high on a source game. I hope the 310m in the new macbooks does better.
Comment
C

Revelation78 said:
HL2 and CSS are already available for download through the beta client. I assume they will be available to play come 12 May 8:00am-9:00pm PVT "Pacific Valve Time."
Click to expand...

Awesome news! Thanks for the update. I've been wanting to play HL2 again for a while
Comment

Steam for OS X comes out on my birthday (unless Valve time kicks in ).

Talk about the best birthday present ever. Thanks Gabe Newell!!!
Comment
S

Revelation78 said:
HL2 and CSS are already available for download through the beta client. I assume they will be available to play come 12 May 8:00am-9:00pm PVT "Pacific Valve Time."
Click to expand...

Not on my beta.

i really hope modern warfare 2 comes to mac too. then i can finally ditch bootcamp.
Comment
J