While we noted early yesterday that the first Retina MacBook Pro orders had begun shipping, a number of MacRumors readers are now reporting that the first deliveries are already arriving. 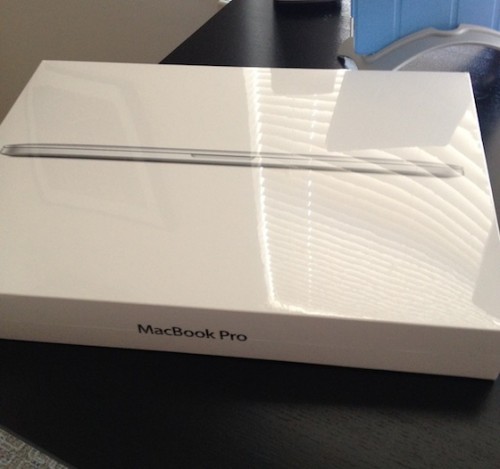 At least one of the readers who received his new MacBook Pro had ordered a custom configuration, bumping the high-end stock model to the 2.7 GHz processor and 16 GB of RAM. 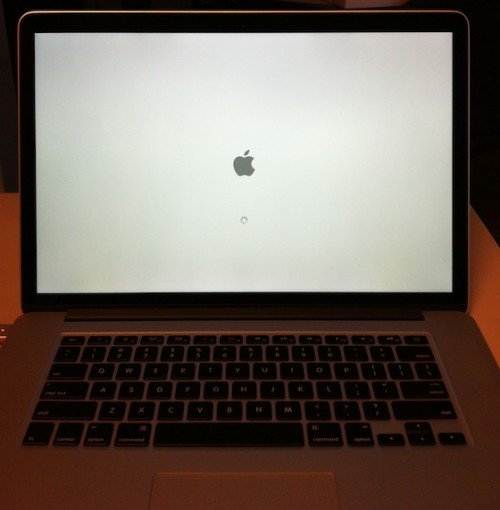 Newly-delivered Retina MacBook Pro on initial boot​
A few customers have reported being able to obtain the new Retina MacBook Pro in-store, but many Apple retail stores still do not have any stock of the machines beyond the display models, with some now indicating that they will not have stock until Monday.

(Thanks, Trevor and Jeremy!)

Not at my local stores

I have been checking my local stores and they do not have them....

Well colour me Jealous. I'd love a computer with a screen that good. Is there a matte option?
S

Does the screen really have those pinkish and greenish hues I'm seeing in that photo?
U

yup you will definitely need to boost your ram to at least 8 gig when you order..

WestonHarvey1 said:
Does the screen really have those pinkish and greenish hues I'm seeing in that photo?
Click to expand...

I hope you're being sarcastic.

That sounds exciting but then its same OS so should get old in 30 min or so...of course unless its replacing a PC or a really old Mac.
R

All of the retina apps better be out by next Friday when I should get mine!
E

Ordered my 2.7 with 8gb ram and 512 SSD, just shipped last night to Seattle, won't get here till Monday. I ordered within 5 minutes of the Apple Store going live! WTH.

The lack of "Macbook Pro" under the screen still seems odd to me. I understand why they did it, but I guess I'm just not used to it.

GorgonPhone said:
yup you will definitely need to boost your ram to at least 8 gig when you order..
Click to expand...

If I were ordering I would do the max ram as you can't upgrade it in the future.

You people with money suck.
J

Can't wait until the "My screen has yellow tint" threads start.
T

GorgonPhone said:
yup you will definitely need to boost your ram to at least 8 gig when you order..
Click to expand...

The Retina MacBook Pro already comes with 8GB of memory. Also, how is a comment on memory relevant to this thread?
W

L-U-R-C-H said:
I hope you're being sarcastic.
Click to expand...

Do you honestly not see what I'm talking about?

how long does it take to boot?

why is apple doing this :S, I mean they create great product and then it's very short on supply...still waiting for my rMBP
P

I'll be waiting until next year when they bring out a proper PRO MB so I can upgrade from my 2008 MBP, and not this eye-candy to keep the masses with deep pockets happy.

Mirror Mirror on the wall why has the new MBP not got the latest and greatest Processor of them all..

"...Well Pyzon you see, Apple have a glut of processors and 'must have' purchasers so we will bundle the 'not so new' MBP with the old crap and bring out a new soooped up MBP for the rest next year.."

Thank you Mirror! don't fail me or I'll crack you!
Q

Using Photoshop in 15" it's too small and MBP is overpriced. Better waiting for a n new iMac...
N

WestonHarvey1 said:
Do you honestly not see what I'm talking about?
Click to expand...

sartis said:
I have been checking my local stores and they do not have them....
Click to expand...

Mine does, I checked them out yesterday.

I'd say early adopters will have a couple "disappointments" until everything is updated to retina graphics. I opened updated apps like Aperture, iPhoto and iMovie, they looked great on the RMBP. But then I opened Pages and Keynote, which haven't been updated yet, and everything looks blurry. But that'll change eventually.

Surfing the web...honestly felt about the same. Sure, font was really crisp when I zoomed way, way in but nobody reads articles zoomed way in. Watched some 1080p video (the retina MBP ad, natch) and it worked flawlessly, but almost seemed fuzzy as well. They need something higher res than 1080p to take full advantage of this thing.

It seems to me honestly that the larger the screen, the less the "retina" is noticeable. Put an iPhone 3GS and an iPhone 4 side-by-side and you can tell the difference in the screens from 20 feet away. An iPad 2 and new iPad, it's noticeable but you have to get look more closely. The retina MBP, aside from the dock, it just wasn't as noticeable, unless you're doing big zoom-ins on high res photos or fonts.

Edit: Truth hurts, huh? Sorry to **** on your parade guys, but this is coming from someone who does graphic design, photo and video editing for a living and I don't wear glasses either.
Last edited: Jun 14, 2012
E

WestonHarvey1 said:
Do you honestly not see what I'm talking about?
Click to expand...

Are you serious? Does that mean that the aluminum on his macbook has a reddish tint as well? Seriously it is just the lighting in the room and the camera used to take the picture. No pink tint
You must log in or register to reply here.
Share:
Facebook Twitter Reddit Email Share Link
Register on MacRumors! This sidebar will go away, and you'll see fewer ads.
Sign Up
Top Bottom