Five Apple Stores to Reopen This Saturday With Modernized Designs

Apple has announced that five of its retail stores across the United States and Australia will reopen this Saturday, September 29. Four of the stores have moved to new locations, while one has been renovated. 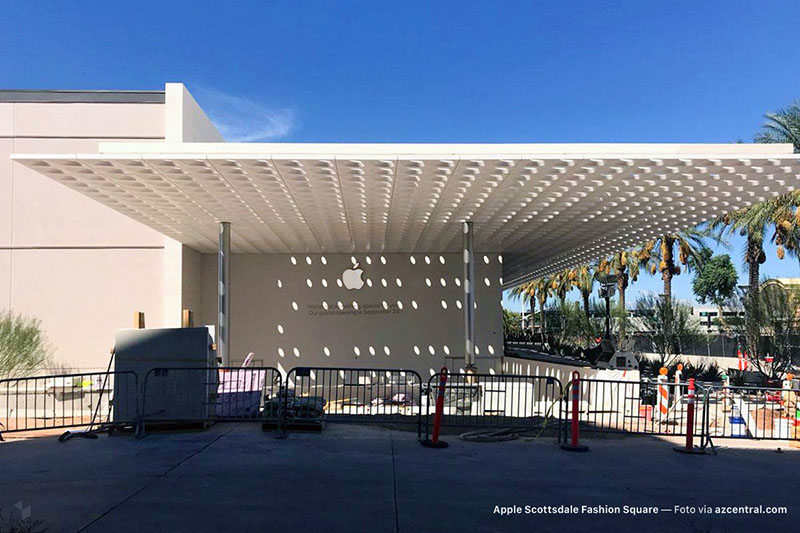 Apple Scottsdale Fashion Square via The Arizona Republic/Storeteller​
Apple has been modernizing its chain of over 500 retail stores since 2015, as part of an initiative led by Apple's retail chief Angela Ahrendts and design chief Jony Ive. The remodeled stores often gain additional square footage, which many locations desperately need due to ever-increasing customer traffic.

These reopenings will occur eight days after the launch of the iPhone XS, iPhone XS Max, and Apple Watch Series 4.

Does Apple still give away shirts or anything during their grand openings?

uofawildcats96 said:
Does Apple still give away shirts or anything during their grand openings?
Click to expand...

They did when they opened the new Michigan Ave store in Chicago. Can't imagine them changing that for other stores opening

As Robina, Australia is my local store, I guess I know where I'll be going on Saturday!

It's a long overdue change, as the existing store is far too small.
Reactions: martyjmclean and gadgetgirl85

Hopefully these ones will have full-time security guards...

Can’t wait for the free shirts!

i wonder what kind of criteria Apple used to pick stores for facelifts because in the south fl market because Lincoln road got its own flagship store and opened a new one in Brickell yet Dadeland and Aventura are still using stainless steel fixtures and continue to get packed with traffic...
the falls is dead
L

I wish they expand to more stores throughout the country. My closest one is like 45 mins to 1 hr away. Would like to be able to have a store closer to me.
T

The Lehigh Valley store was just doubled in size, but it's not really a re-opening since I was just at it on Monday and the original part looked the same. It'll be interesting to see how it is.
Reactions: rotlex

Green Hills in Nashville is the closest Apple Store to me (About 1.5 hours) I hope they made the space larger with the renovation. That store was always so, so, crowded for its size.
N

TigerWoodsIV said:
The Lehigh Valley store was just doubled in size, but it's not really a re-opening since I was just at it on Monday and the original part looked the same. It'll be interesting to see how it is.
Click to expand...

I know it's adjacent to the existing one - do you know if they will continue to occupy the existing space or if they'll close/vacate the space they are currently in? If they're keeping the current space and knocking out the wall or something, it would be more like a tripling of space.
Reactions: rotlex
J

would be nice if Apple would have 1or2 stand alone stores in the hood here. Avoid the shopping mall concept.
S

Cue Ivey saying something about how only apple could design a semi-permeable roof that represents Apples connection to nature. Next step, collect a big pay check and a prestigious award.

Arizona (in general) is so boring.

The one near me has been closed since February.

Interestingly, the Alderwood Mall store in WA is closed since late February. I wonder how long it will take for renovation.

Modern and chic from the outside, 2014 Haswell in the inside.

uofawildcats96 said:
Does Apple still give away shirts or anything during their grand openings?
Click to expand...

How easy will these be to rob?
K

Are they still doing this ‘town square’ thing that was announced last year?
M

They really should. Nicest people I’ve ever met were in the Dublin airport. I am just down the road from Apple HQ. I’ll go tell them they should do it.
Reactions: Moi Ici
A

Irvine Spectrum Apple Store, in southern LA county, just relocated towards the newer section and can be seen off the 5. The size increased more than half from it's original location. Massive improvement with the higher ceiling and the town hall video wall area.

Can anyone post photos of nearly finished stores? I checked their webpage and there's no pictures yet.