Delta Airlines recently announced an update to its Fly Delta app that will allow customers to track their luggage by following its journey on a map of the United States. Using RFID tags on a user's bag, which the airline introduced earlier in the year, the app shows the luggage's "last known location," determined by the airport at which it was most recently scanned (via CNN).

When the app is first opened, users see a glimpse of a zoomed out map of the U.S. and they can catch up with a bag's journey as it travels from one airport to the next, eventually zooming in on its most recent leg of the journey. The step of the bag's progress at each airport is marked by a pin, with its most current location represented by a suitcase icon. If a user taps any of these pieces of UI, more information about the location and bag's status will be displayed. 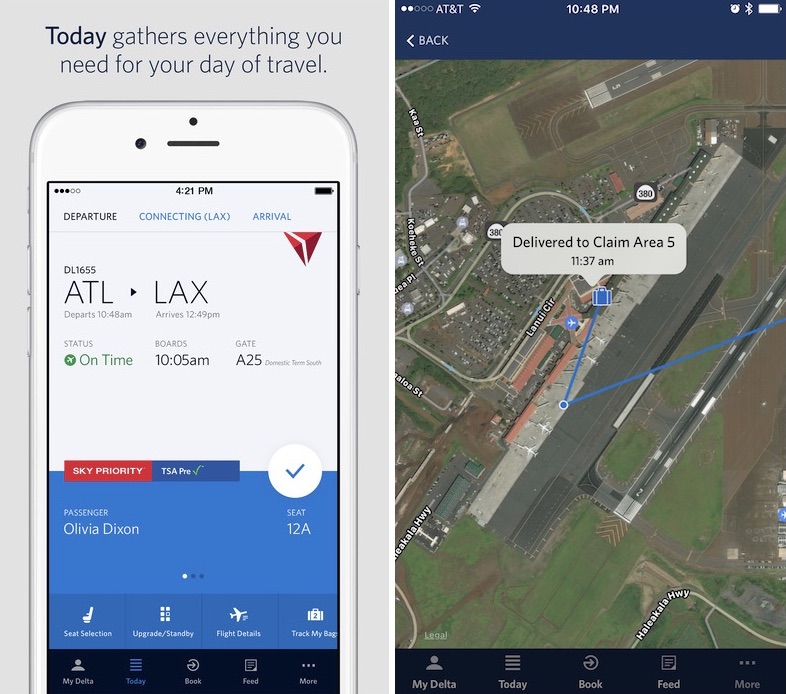 "We're the first carrier to offer this level of visibility," said Bill Lentsch, Delta's Senior Vice President - Airline Operations and Airport Customer Service. "From the moment our customers drop off their bag, we want them to know we're looking out for it every step of the way and working to take the stress out of flying one innovation at a time."

"We listen to our customers and know they want a simplified mobile experience that puts the control back in their hands," said Rhonda Crawford, Vice President - Global Distribution & Digital Strategy. "Fly Delta 4.0 automatically updates when your flight details change, keeping customers informed."
Click to expand...

While the update is available now, Delta said that push notifications won't be coming until later in the year, but will "offer Delta customers down-to-the-minute updates on their checked baggage." The 4.0 update also introduces an integration of boarding passes into the "Today" screen, and a tweak to electronic boarding passes now allows them to automatically update with seat, gate, and flight information.

The new bag tracking ability in the Fly Delta app is available at all of Delta's domestic airports -- 84 total in the U.S. -- and the airline said international stations will be gaining the feature "in the coming months." Fly Delta is available to download from the iOS App Store for free. [Direct Link]

I was curious why a status display for a flight from ATL to LAX would show bags being delivered to Claim Area 5 at Kahului Airport, Hawaii. Then I noticed that MR had put those two images together in the single story, and not Delta.
Comment

*sound of other airlines sweating as bar is raised*
Comment

This is cool, though it will make for a miserable flight when you see your bags take off while you are still on the runway...
Reactions: Mlrollin91, Makosuke, Oblivious.Robot and 4 others
Comment

This still does not solve the problem of “lost” luggage. It only shows the last checkpoint through which your luggage has travelled. Likely, the same information Delta already has about your bags - only made available for individual access now.
Comment
T

Rob198612 said:
Um I flew American Airlines on Saturday and was able to track my baggage using the app. So what difference is this delta baggage tracking from American Airlines?
Click to expand...

airline apps have had this tracking for some time (bag tracking itself is not a new feature in the Delta app). but the efficiency has been improved using the RFID rather than physically scanning each and every bag as they go onto/come off of the plane, etc.
Comment
2

Sounds great. However, I gave up on the whole luggage thing. I do carry-on only. Never out of my sight.
Reactions: ArtOfWarfare
Comment
R

zmunkz said:
This is cool, though it will make for a miserable flight when you see your bags take off while you are still on the runway...
Click to expand...

Or conversely when you take off, while your luggage is still showing at the airport or worse, heading for a different location
Comment

Cuban Missles said:
Sounds great. However, I gave up on the whole luggage thing. I do carry-on only. Never out of my sight.
Click to expand...

I assume you at least put a bag in overhead, which has to be closed and out of sight during your flight for safety reasons?

But my wife and I do the exact same thing. Too many stories about lost baggage. Who needs to deal with that added stress during a trip which is normally stressful for other reasons already?
Comment
2

ArtOfWarfare said:
I assume you at least put a bag in overhead, which has to be closed and out of sight during your flight for safety reasons?

But my wife and I do the exact same thing. Too many stories about lost baggage. Who needs to deal with that added stress during a trip which is normally stressful for other reasons already?
Click to expand...

Okay, technically you are correct. I place my carry-on in the overhead, so I cannot see it. But I know where it is and it is going wherever I go because it right above my head.

I had a bad experience on one of my trips to France where it took three days to get my bags to me. That was the last time I checked a bag in (that was 2005).
Reactions: ArtOfWarfare
Comment
A

instead of putting energy on your app, why dont you improve your service and fire some of your nasty-attitude staffs?
Comment

Checking is for suckers.
Reactions: zooby and Fall Under Cerulean Kites
Comment

I didn't know I was on deltaairlinesrumors.com

Anyway Lufthansa (which is probably as bad in service as delta) has this feature for months already. So why is this macrumorsnews ?
Comment
Y

Chupa Chupa said:
Checking is for suckers.
Click to expand...

Ah, so you're the guy trying to force a large carryon suitcase into the overhead bin of a small regional jet, even though it's physically impossible, and arguing with the flight attendant that it will be able to fit, then eventually giving up and deciding to allow them to check your bag, and holding up departure while I sit there, watching the precious minutes in my already short layover tick away. Thank you, the world needs more people like you.
Reactions: btrach144, Mlrollin91, justiny and 3 others
Comment
G

Could this not be enabling RFID-guided bombs for those psychopathic fruitcakes?

zmunkz said:
This is cool, though it will make for a miserable flight when you see your bags take off while you are still on the runway...
Click to expand...

zooby said:
That or, you know, he has a bag that fits in the overhead.
Click to expand...

Or maybe he is that guy bringing a backpack and a Carry on bag (that is way over packed) and neither one of them will be placed under his seat, and he is only 5 '2 complaining of leg room to the folks who checked their big bag, and still were kind enough to put there carry on under the seat in front of them so that others can carry on multiple bags...
Or maybe.....
etc...
Comment

Rob198612 said:
Um I flew American Airlines on Saturday and was able to track my baggage using the app. So what difference is this delta baggage tracking from American Airlines?
Click to expand...

I've been able to track my bags via the AA app for the last two flights I was on. Curious what the difference is between in what Delta introduced.
Comment
J

nburwell said:
I've been able to track my bags via the AA app for the last two flights I was on. Curious what the difference is between in what Delta introduced.
Click to expand...

You have been able to track your bag using Delta's app for some time also. This is an update that adds RFID tracking to your bag so that it can provide more granular information - for example, when it is offloaded from the plane and when it arrives at baggage claim rather than just "scanned at KXTA" as the only data you have since the latter requires the bag to be physically scanned by a person or by a specialised sorting system but the RFID tags will update when the bag just passes by a sensor.
Comment
T

Down to the minute updates will only help if the status is understandable. While at our layover in Atlanta this past Christmas (2015) Delta's app reported that our luggage was on the "carousel" in Atlanta. The Delta staff at our gate thought maybe that "carousel" could mean that it was in route to the next plane but they were not for certain. Obviously we were concerned that carousel meant outside security in baggage claim - which would be a problem. A couple of hours later the app showed the bags were caught up with us and on the plane - which meant two hours of unnecessary worry. It would have been nice if the app had stated something more specific in the status/description to indicate it was in route to the plane.
Reactions: Peter K.
Comment
M

Seems like this is only of interest for three groups of people:

1) People who look at the app and realize that their bag is headed to Frankfurt while they're sitting on a plane headed for Tokyo.
2) People who already lost their luggage and are enjoying watching their clothing take an around-the-world jaunt while they sit in a hotel room on vacation.
3) The annoying road-warrior pacing anxiously at the baggage carousel and ranting at somebody on his cell phone because he's been waiting five whole minutes for them to unload the plane. Maybe it will soothe him where the booze on the plane failed to.

Personally, my family has been using large suitcases to shuttle stuff back and forth to Japan for almost 20 years, and we've yet to lose a suitcase. Although, my wife's bag did manage to get home a couple hours before she did recently, which was confusing because I wasn't aware there was an earlier plane her bag could even have been on.

Business travel less than a few days, just shove some clean underwear, a granola bar, and a laptop in a backpack and call it good.
Reactions: arkitect
Comment

Delta is the only carrier that routinely loses my checked bags. I fly several hundred thousand miles each year on American, United, Delta and several Asian carriers. Delta is the one I can count on to leave my bag in New York when I'm in Manila... I need an app to track my Delta luggage.
Comment
You must log in or register to reply here.
Share:
Facebook Twitter Reddit Email Share Link
Register on MacRumors! This sidebar will go away, and you'll see fewer ads.
Sign Up
Top Bottom