I'm trying to find a nice p&s that I can carry around with me pretty easily and have narrowed it down to these two cameras; Fuji F30 and Canon SD700 IS.

The F30 has way better high-ISO performance while you get the IS and the bigger range from the Canon.

Which one would you choose? Also which one would you recommend for me? I usually take a lot of photos at parties and such (indoor/dark conditions, which pointed me in the direction of the F30), this camera would mainly be used to take snaps of friends, and family.

wingsky said:
... I usually take a lot of photos at parties and such (indoor/dark conditions, which pointed me in the direction of the F30), this camera would mainly be used to take snaps of friends, and family.
Click to expand...

I have an F30 and have owned several Canon Powershots in addition to image stabilized Canon lenses for DSLR. I have also tried the SD700 IS. Given your usage pattern above, the F30 is definitely, definitely the better choice for you. IS helps in dark parties, but you end up with too much blur due to subject movement. If you mainly shot outdoors and much less often in darker conditions, I would give the SD700 IS the slight edge. I use my F30 mainly for snaps of friends and family, and it is ideally suited to this role.

I have the F30.
It definitely can take beautiful 800 iso shots, and even the 1600 shots are fine if exposed well. The indoor white balance is pretty good, too. Also, the lens is very sharp, and while it does have purple fringe at times, i honestly haven't found it to be a problem 99.9% of the time. The only thing I don't like is that it has had trouble giving pleasing colours/contrast to brightly lit scenes composed of mostly greens--like a garden.
I haven't used the Canon 700is, but I was thinking of getting it instead of the Fuji because I really like the build quality and outdoor color reproduction of Canon (I've got an Ixus 55 and an A95). If the lens was sharper around the edges and there was some control over aperture/shutter speed, I'd probably have gone with the Canon.
But for an indoor people shooter, the F30 is probably the best one around.
D

I can't believe you just started this thread. I was literally just trying to decide which of these two cameras to upgrade to from my canon powershot s50. I'm looking forward to what others say.

In case you haven't seen them already, here are the reviews on dpreview.com:

Good luck, and let us know what you decide!

I was in the same boat before ultimately deciding on the F30; I got it almost immediately after release, have had it for a few months now. I've always liked Canons, the thing I didn't like is that with the 700IS they reduced the sensor size and increased the pixel count, which ultimately increases noise. I still like the overall color of the pictures better with the Canons, but the noise is just too much. The F30 has been great in low-light. However, it just loves to shoot at the highest ISO, so you have to watch to lower the ISO if the high ISO isn't needed. I wish the Fuji had some of the features I'd gotten used to on my Canon S400 (still the best digicam I've ever had), such as photo stitch (easy panoramas from stitching together individual photos). But, I'm happy with the Fuji.

I forgot to mention, some of the photos I posted on the "Picture of the Day" thread are from the Fuji F30.

Here is another sample, which I believe aptly demonstrates the high iso capacities of the F30. Aside from reducing the file size, I have not applied any NR or corrected any other aspects. 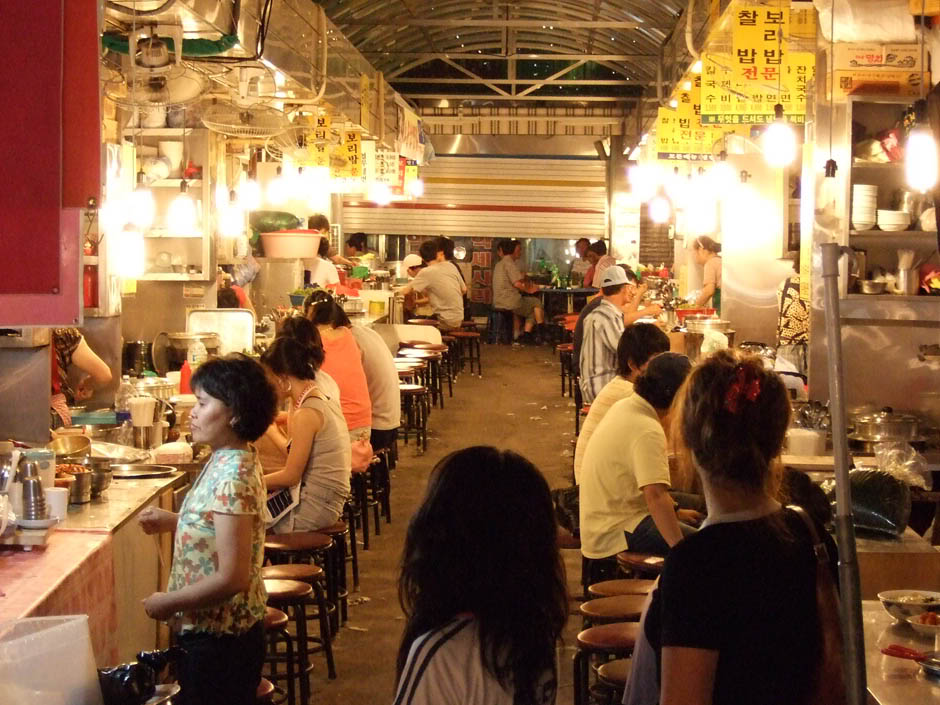 Bear in mind that this file has been reduced for uploading in Photoshop--it is at 33% of its original size, and saved at 7/12 quality.

Personally, I find the lack of noise rather freakish for a P&S. Last week, I took my now out-dated (but still much-loved) Ixus 55 out for a "ride" to the school I teach at. The iso 400 pic.s were useable, but only after a good lashing from Noise Ninja.

In case you are wondering, the photo above was taken in Namdaemun Market, Seoul, S. Korea, about a month and half ago, the first day I owned the camera. This is a small place of several vendors, where people can fill their hungry bellies with hot 'n garlicky delicacies, Korean-style. Korean food is delicious.

I spent the better part of a day wandering into the many camera shops in the Namdaemun area, comparing the Fuji F30 with the Canon Ixus 800IS and Ricoh GR-D--after too much time reading reviews and considering samples, I was determined to take home a new camera. The Canon is so beautifully built and its i.s. so alluring, and the Ricoh's lens/build so promising. However, despite its shortcomings in the sunny/green conditions I mentioned previously, I have no doubt I made the right choice. DP Review just posted its analysis of the GR-D--NOISE!! Even at iso 64. Ha!! To hell with that! Maybe I'll get a GR-D mk.II, someday.

I think the Canon would be a good choice if you don't mind corner softness, some noise at iso 800+, and no control over f-stops/s.speeds. But, I'd still pick the F30 over the Canon today.
Having blabbed on about all that, I'm looking forward to Canon's new fall lineup, since I'd like a Canon 28mm zoom P&S with I.S., sharp corners and reasonably low noise for all the shots I take when I'm out running on the mountains. If only Canon (body, software), Leica (lens) and Fuji (sensor)would combine their strengths...
W

Thanks for your opinions, and nice picture freebooter

I think I will go with the F30 now, silly me forgot to realise IS won't work that well for fast moving objects (read - projectile vomit ?!)

I'll try and come back and let you know how I get on with it.

wingsky said:
Thanks for your opinions, and nice picture freebooter

I think I will go with the F30 now, silly me forgot to realise IS won't work that well for fast moving objects (read - projectile vomit ?!)

I'll try and come back and let you know how I get on with it.
Click to expand...

Good choice!
I look forward to some puking pic.s.
A