The United States Patent and Trademark Office today granted Apple a patent for a "Stylus with inertial sensor," equating to an advanced version of the Apple Pencil that could potentially function with the company's iMac-compatible Magic Trackpad (via Patently Apple). The patent was originally filed in November 2014, but was only recently published in May of 2016.

The patent briefly mentions the combination of the Apple Pencil and Magic Trackpad (or "electronic equipment"), which would receive "electromagnetic signals from electrodes at the first end of the stylus" and translate a user's drawing into a compatible iMac program. The potential integration could bring artistic drawings and programs to Apple's desktop line, similar to the boom such apps saw with the release of the Apple Pencil and iPad Pro last year.

Overall, the new patent details a next-generation Apple Pencil with a far greater technological reach than the current version of the stylus. The proposed update could bring in-air gestures in order to let users control Keynote slides or rotate objects on an iMac screen, turn the accessory into a joystick for games, or even use the Apple Pencil as "an air mouse" in lieu of the Magic Trackpad itself. 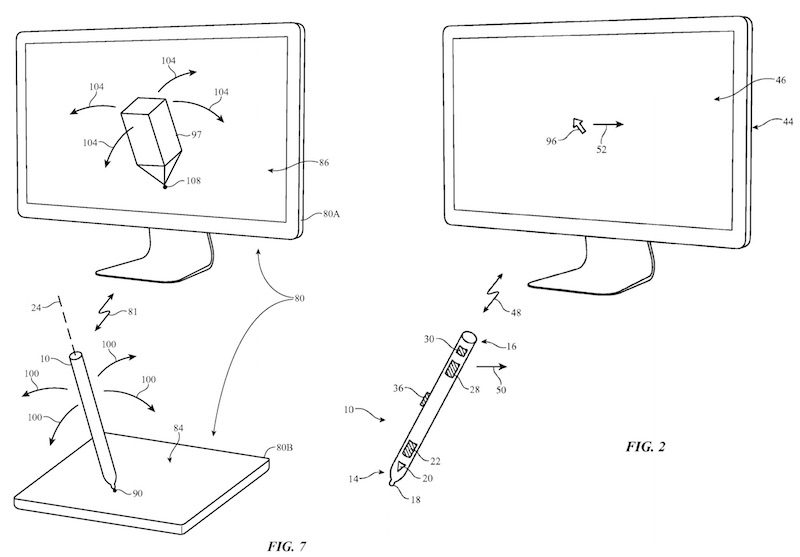 Although Apple was granted the patent today, as with other patents, it's a good idea to remain wary as to how long it will take the company to announce, reveal, and release such a device like the Apple Pencil described here, if it ever will. All the same, it would appear a safe bet that a new version of the stylus could pack in some of these motion-sensing features, even if it's still limited to the iPad line.

This is the next logical step for Desktop users, nice!
K

Makes sense too since Apple always had used glass for its trackpads.
3

It's cute they used a [now discontinued] Apple display in the patent filing (not an iMac).
Reactions: sudo1996
T

This is AWESOME!!! I've been on the fence about getting a small Wacom tablet for my setup. This would be just perfect. Now can you release this sometime soon Apple?

As long as the Trackpad remains "clicky", it's not going to be very fun to write or draw on.

Pakaku said:
As long as the Trackpad remains "clicky", it's not going to be very fun to write or draw on.
Click to expand...

Pakaku said:
As long as the Trackpad remains "clicky", it's not going to be very fun to write or draw on.
Click to expand...

The trackpad isn't "clicky" any more; it's just an illusion of Force Touch.

They should make the trackpad an extra large palm rest with palm rejection on the new MacBook Pros; it could be used to represent the full width of the screen, or have the right or left side disabled (according to the user's dominant hand) and have it represent the entire screen.

Now THAT would be an amazing innovation if they included pencil support - it would live up to the expectations and desires for the new models.

This will definitely happen. But when is the question?

As long as they also add an eraser, I don't care what they do!
N

It won't be released unless the pencil is thinner and has replaceable/changeable color bands.

StarkerMann said:
It's cute they used a [now discontinued] Apple display in the patent filing (not an iMac).
Click to expand...

Yes, I know, I was being sarcastic.
B

Just waiting for some patent troll in the US to say that they have a claim to it, even though their patent isn't in effect until 2019.
You must log in or register to reply here.
Share:
Facebook Twitter Reddit Email Share Link
Register on MacRumors! This sidebar will go away, and you'll see fewer ads.
Sign Up
Top Bottom