First off sorry if in the wrong forum.

I grey up in the early 80s and there was a video arcade game that allowed four players to play at once.

Gauntlet: The original by Atari
https://en.wikipedia.org/wiki/Gauntlet_(1985_video_game) 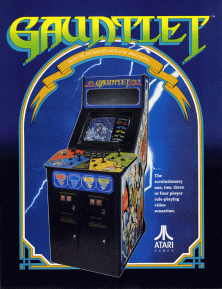 Barbarian, Archer, Wizard, and Dwarf (I think) were the four characters you could select. Throughout the game each character would get unique power ups for their skill set, as well as more generic power ups for Health/Food, Strength, resistance to magic or weapons would also pop up.

The enemies, small in strength while vast in numbers, as well as great in strength and small in numbers would come at any and all these characters without mercy! The speakers above the screen was just awesome with narration from some overlord stating "Wizard Needs Food" or "Babarian is dieing". If you chose not to move your character along the screen (Up, Down, Left, or Right) and fall off the screen you had a very VERY limited time window to move the joystick into the direction of the others before your character died regardless of health - if memory serves.

I cannot tell you how much money I've spent playing this game when I was 11-13yrs old because well ... I had a LOT of quarters and even a LOT more Jamaican dimes (same size and weight as a Canadian/US Quarter lol) - and was smart enough not to go EVERY day.

I'm desparately looking for an iOS game that truly embodies this game. I've found a few that have 'gauntlet mode' but not fully this game.

Wayward Souls is good by the looks of it but nothing close.
Curious if a game like Gauntlet has been made for iOS yet compatible or playable for the TV via Screen Mirroring to AppleTV?!

Does nobody recall this game and found an alternative on iOS?
M

DeepIn2U said:
Does nobody recall this game and found an alternative on iOS?
Click to expand...

Funny you should ask. This just dropped yesterday. Haven’t tried it yet, but some are describing it as a gauntlet-esque roguelike with loot and buffs.

MrPeripatetic said:
Funny you should ask. This just dropped yesterday. Haven’t tried it yet, but some are describing it as a gauntlet-esque roguelike with loot and buffs.