I received delivery of my Benq PD3200U 4K monitor today and I adore it... the size and sharpness and colour accuracy right out of the box is just a joy to behold. Only problem is... in the 4K I can really see UI menus in certain apps as they are just so small and the software doesn't allow any major UI adjustments.

Is there anyway around this... I don't really want to drop down in resolution... as the 4K viewing experience is superb... and I have tried lower resolutions and the menu titles look fuzzy and artefacts are showing.

sounds like you want stuff larger, like text and icons, while still having a 4K resolution? this sounds like HiDPI scaling. when you're in System Preferences - Display, hold ALT when clicking the scaled button. it should list these options for you there. I don't have much experience with it. I am under the impression some apps may not adjust properly, or at all.

unlike just using a lower resolution, HiDPI will keep the higher resolution but scale things like text, icons, menus to a larger % so you do not need the Hubble telescope to see details on your screen

Thank you very much for that advice.... very much appreciated.
[doublepost=1553020944][/doublepost]Will the performance of my video card nowbe slower now that scaling is active... while before it was set itst's native resolution... will I see lag..?
S

performance by theory should be the same, the GPU is still working with a 4K resolution, it is just displaying what you see differently (technically scaled). this is likely a gross simplification but imagine it is doing something like what used to be just 1 pixel, it is now making that 1 pixel appear as 4 pixels, hence why things look bigger

just make sure you see "HiDPI" in parentheses next to the resolution you select. or else what you have selected is just a normal scaled down resolution

I'm afraid I'm not getting any HiDPI next to the resolution I have selected.... but from another forum post reply... someone said the ones that say (low resolution) should not be used... so I thought the ones with nothing beside them... like the full 4K resolution option would be the ones to try.
S

you should see something like this (link to a photo). just as a general FYI, holding ALT when clicking scaled generally brings up additional options that will not be in the list doing a normal click

try selecting your native 4K resolution. then doing the hold ALT and click scaled button. (shooting from the hip here)

I have only played around with this stuff just to see what was available on my system but I normally only work on 1080p screens so HiDPI is not something I have enough experience with. I have no idea what the low resolution selections are for example, quick look makes me think it is something related to Apple "retina" displays, I don't think it applies to your use case.

I have had good luck with forcing resolutions in macOS that are not native with ResXtreme. its a free app that might be able to help you out. no way to know until you download and install it, and see the list of resolutions it is capable to switching to. I for example sometimes want more space on a particular screen that is native 900 or 1080 but I'll force it to 1080 or 1440 respectively. I get you want to go the other way though. There is a column called Scale in that app that will tell you if its HiDPI or not. 1X = native, so 2X would be scaled double. such as seeing a 1440 (2K) UI resolution, but is an actual working resolution at 2160 (4K) as an example

Check this page, for HiDPI, the resolution will be 2x “UI Look like” 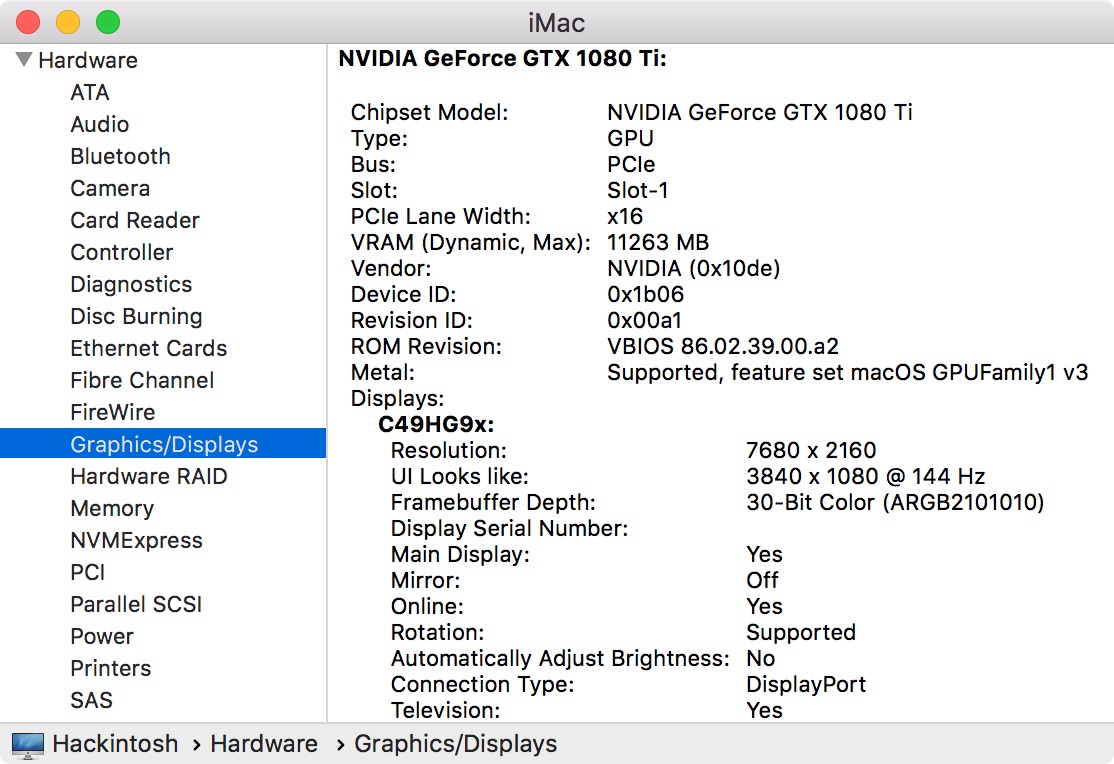 skizzo said:
performance by theory should be the same, the GPU is still working with a 4K resolution, it is just displaying what you see differently (technically scaled).
Click to expand...

That’s not how it works.

Should be just fine with a decent GPU. But it is not the same performance as direct 4K output. Scaled resolutions can use significantly more horsepower. Scaled resolutions almost always render at 2x the “looks like” resolution to help with providing enough detail for the down sample.
Reactions: h9826790
You must log in or register to reply here.
Share:
Facebook Twitter Reddit Email Share Link
Register on MacRumors! This sidebar will go away, and you'll see fewer ads.
Sign Up
Top Bottom