Every day more and more companies announce Apple Watch versions of popular iOS apps. The trend continues today, with video and photo messaging app Glide confirming a companion app on Apple's new wearable will be available to its users when the Watch launches on April 24.

The Glide iPhone app allows users to send and receive live video messages from friends - up to five minutes long - even letting its users watch someone live as they record a Glide video, or catch up later if they missed anything. 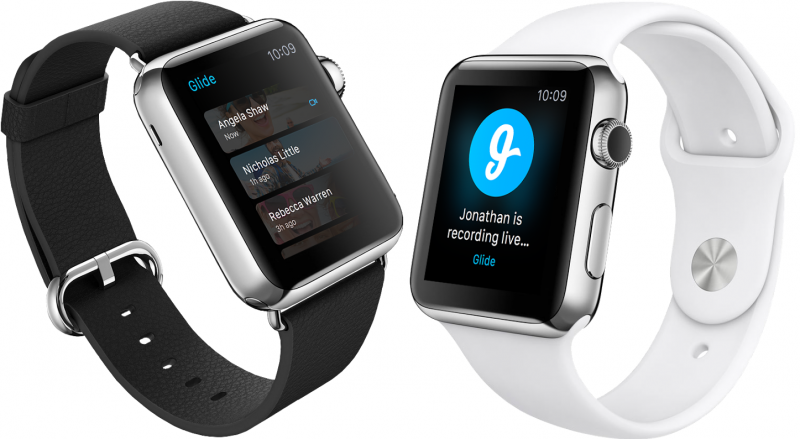 The Apple Watch version will act as a companion to its iOS counterpart, notifying users of live Glides, missed messages, and allow them to peruse the app and watch videos right on their wrist.

The app, like Apple's own Messages, will also allow users to send truncated text, emojis, or use speech-to-text to dictate a response to someone's Glide video. Although the Apple Watch version of Glide will allow users to view full Glides on their Watch, it will also support Handoff, so users can go from watching a video on the Watch to an iPhone's bigger screen without missing a single beat.

Although impossible with the current Apple Watch hardware, Glide CEO Ari Roisman looks to the future to envision Glide and future iterations of the Apple Watch - with a front-facing camera - working together to provide incomparable video chatting services to users right on their wrists. Speaking to VentureBeat, Roisman believes that live video messaging, via wrist-worn devices, will become the most widely used way in which to catch-up with friends and family, possibly even without a paired smartphone.

"We are very bullish on the Apple Watch and believe that live video messaging from your wrist will rapidly become the easiest way to keep in touch with friends and family on the go," said Glide CEO Ari Roisman in a statement.

"We are going to be communicating with computers using natural language, in the same way we communicate with humans," Roisman said. "What that feels like is what we've been dreaming up in the world of science fiction for years. This is nothing short of epic, and the Apple Watch is just the first, tiny little half-baked manifestation of that, but it's here."
Click to expand...

Roisman's hopeful future is no doubt far away, but it's still interesting to note how current app developers, with their own skin in the Apple Watch game, view not only the device's current state but its long-term future, as well.

Glide can be downloaded from the App Store for free. [Direct Link]

I fail to understand how any video would be better experienced on the Apple Watch than an iPhone.
H

so i have to get my peers to download and sign up for yet another messaging service? too much effort. i'm good.

It's just a preview. It's better in situations where immediacy is key.

Have you even been sent a video but thought "I'll just check this out later when I have some time"? But maybe you forget to watch the video later because all you saw was a link and it didn't strike you.

This is a chance to get a quick glimpse to give you the idea, and help you know how to prioritize when to view it on your phone.

Standard front facing camera on the Apple Watch would be dumb - it'd be awkward to hold it at an appropriate angle for long periods of time.

The 3D camera technology that Apple just bought could be nifty though... maybe it could take a 3D video of you from a perspective where you're holding it more comfortably for recording, and it could adjust that to a 2D video from a more appropriate angle to view. Just an idea.

ArtOfWarfare said:
Standard front facing camera on the Apple Watch would be dumb - it'd be awkward to hold it at an appropriate angle for long periods of time.
Click to expand...

I keep seeing people repeatedly miss the point of the watch. FaceTime would be GREAT on the watch-- for brief, fleeting conversations. Extended conversations (more than 1 minute or so) would get passed to the phone.

I think if Apple Was had FaceTime, people would use FaceTime a LOT more. Just for a momentary 'Hey, check this out. Good to see you. Adios!"

filmantopia said:
I think if Apple Was had FaceTime, people would use FaceTime a LOT more. Just for a momentary 'Hey, check this out. Good to see you. Adios!"
Click to expand...

More like a video walkie talkie than a video phone.
M

I hope HBO Go also will support the watch.

Tim's going to love that. There's a whole new ad campaign in there somewhere.
D

'camera 3, i'd like to make her look a little more attractive, how far back can you go?'

'how would you feel about cleveland..?'

Which is why I think Tinder for the watch would be perfect. "Glad that's just a thumbnail....swipe!"

Well that is what small video is good for...

The main reason I'm holding off on an Apple Watch is because I know next year or 2017 they'll release a new version with a camera. Rather spend $1100 then.

dick hell tracy YES. i'll snap up an apple watch as soon as it has this capability, even if i'd barely ever use it. i imagine many millions more will too.. this is where it's at.
You must log in or register to reply here.
Share:
Facebook Twitter Reddit Email Share Link
Register on MacRumors! This sidebar will go away, and you'll see fewer ads.
Sign Up
Top Bottom