Popular note-taking app and PDF editor GoodNotes has been updated to support document sharing over iCloud for the first time. 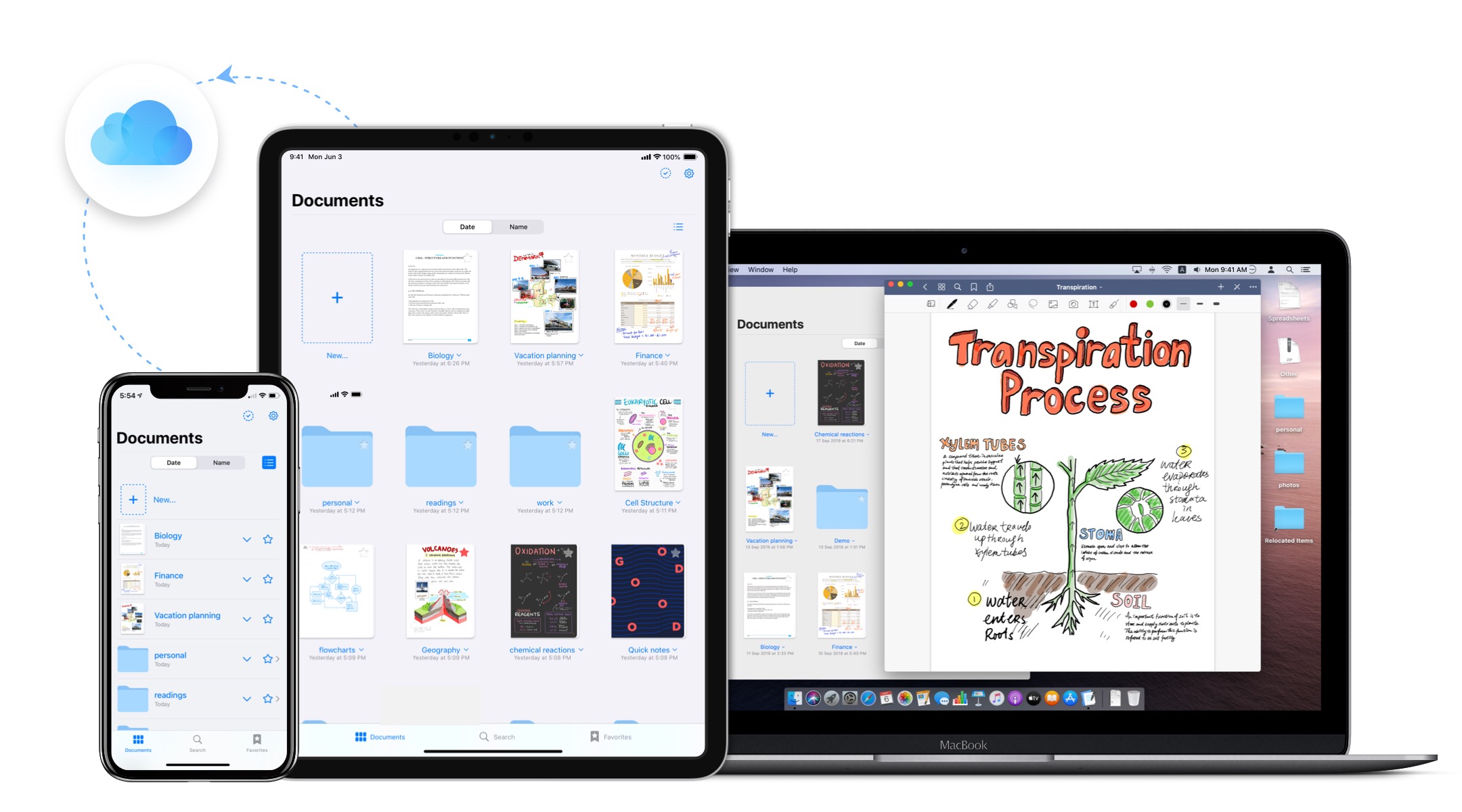 After updating to version 5.5.0, users will be able to share individual notes and entire folders of notes using unique URLs, as well as collaboratively edit the same note with others at the same time.

Users can share documents from their GoodNotes library by tapping a document title, which opens a context menu containing the new Collaborate option. If a user is already working in a document, they can tap the share icon to reveal the same option.

Shared documents display a special icon in the GoodNotes library, and can also be accessed from a new Shared tab in the app's navigation bar. Changes to shared documents sync via iCloud and take around 15 to 30 seconds to show up on other devices, and anyone with the link can open and edit a shared document in GoodNotes.

The developers concede that this way of working is unlikely to replace real-time collaborative whiteboard apps, but it does offer a means of working together on things like calendars, meeting notes, grocery lists, and so on over an extended period of time.

GoodNotes 5 costs $7.99 and can be downloaded for iPhone and iPad from the App Store. [Direct Link]

Anyone got any opinions of this versus Notability?
J

It’s a good app, I wish however that the Mac version was a bit less clunky and not so obviously a Catalyst app (but it comes free with the iPad version).

In comparison to Notability I think a prefer the fact that the text of PDFs can be directly selected, highlighted and copied as text.
Writing and text recognition seems a little worse to me.

One feature I would really like to see is the option to scan excerpts from books into documents, ideally with OCR. Currently it is only possible to either take photos and add those or turn scans into entire pages.
Reactions: BigMcGuire and DreamyLucid
C

It beats Notability hands down in all except two things

1) Shapes. Notability gives you control over modifying your shapes
2) Audio recording. GN doesn't have any. Notability allows you to record audio while you take notes - and in playback of the audio, your note taking plays back too so what you wrote is shown in sync with what you heard!

But, those two features weren't enough for me.
Reactions: DreamyLucid

I've pretty much used both and found each a good tool for note taking. Both have OCR but unless you write clearly neither is all that accurate. Notablity also has a tendency to convert some characters to shapes at random times. Good notes makes you swipe to add pages where Notability lets you just scroll.

I don't sysnch to my Mac so I have not tested the synch feature. Goodnotes is adding an "email to Goodnotes" where you get a special email that lets people email yo a pdf and Goodnotes stores it in the Cloud.

TLR: Both are good apps. Good notes appears to be cheaper and if you buy the iOS app you get the Mac App for free.
Reactions: PlayUltimate

reference:
I have used both Notability & GoodNotes on my iPad and Mac.

I prefer Goodnotes over notability of the organization capabilities. There Is not enough actual not taking differences (to me) for that portion to matter. Notability does not allow for folders, goodnotes does. I have tons of notes that I wsnt to easily manage and rarely use. Notability felt clunkier in this area.

Both have Mac apps, I do not remember the cost of them to compare. They might have even been free.
I only use the Mac apps for importing PDFs, and reviewing notes. I rarely edit with Mac.
Reactions: ChrisH3677

For me, handwriting on Notability is hands down better. Have to chose the ink option that isn't a rollerball but drops off (the second option). 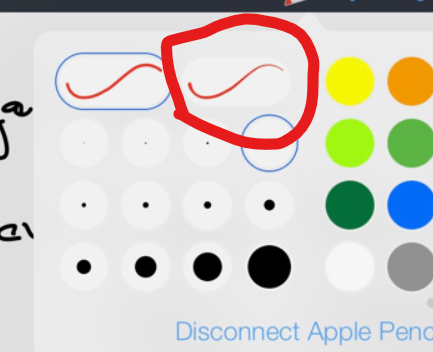 This is similar to Apple Notes' pencil (not pen) mode but allows me to write the best for my handwriting style. I write a bit slanted and at very high speed - so the normal inking results in juts and lines where I don't intend them. But with the above red circled option, I can write as fast as if I had a Parker Jotter and paper and it is very clear, even at a small size.

Feature wise... I prefer GoodNotes. I like the idea of books instead of a collection of papers. I like that it stores my data in iCloud whereas Notability uses iCloud syncing and you don't see the data in iCloud. Both have similar backup features. Searching is easier in GoodNotes.

GoodNotes on Mac OS is pretty bad. Notability on Mac OS is OK. Both are centered around handwriting so don't expect it to be like OneNote - which supports typed notes better than both by miles.

Notability's ability to do shapes just by holding down the pencil is very handy - especially for math classes, etc.

Notability's audio recording WHILE you take notes has been a life saver for me in college classes and work meetings. Not only does it allow you to record audio while you're writing, when you play back the audio later, it shows what you were writing as the audio was playing. This joggles the memory better than anything I've ever used ... very handy.

I have both and use both - but mostly use Notability as I can write in my natural hand at normal speeds - it feels like paper and looks identical to my on paper handwriting whereas GoodNotes and Apple Notes forces me to write differently and is not anywhere near my normal handwriting look.

Due to the minimalistic cost, I recommend both - but if you had to choose one, Notability would be my recommendation no questions asked. I've been using it for years and years. I've got gigs of notes in it.

One can never have too many notebooks, pens, or paper . My iPad has really helped me with organization, note taking, and reducing the amount of stuff around my desk and when I travel - thanks to these two apps.
B

I think you'll find it's as close to a 'push' as possible, I have both... but... Notability is my go to. First off, GoodNotes charges for each numbered upgrade. Infinite scrolling with no need to flip pages. More screen real estate given to writing instead of a Microsoft Office style gigantic banner bar (which simultaneously has its benefits). Annotating PDFs or PowerPoints is just better with an easier interface. Audio recording... it's more than just audio, but it plays out your actual handwriting as the audio plays - so if you ever look at a note and say "wtf does that tie to?" you can just play the audio to hear what you were writing about.
Reactions: BigMcGuire
C

I've tried different note-taking apps, including Evernote. And I keep going back to Apple Notes. I really like its simplicity and integration.

They're both great. Personally, I get on really well with Goodnotes as it suits my need to organize. My only real wish is that it had audio recording.

Notability is great too and it has the audio recording (which is done really, really well). There's also something about my writing in Notability - it's just smoother and more pen-like. That sounds minor, but somehow, they have really got the inking feel nice in Notability.

The thing to do is to buy and try both. Apple will refund you for the one that you don't like if you ask nicely via 'Report a problem' and don't do it too often. I ended up keeping both - I mostly use GoodNotes, but sometimes use Notability when I need to use voice recording.

There is also the app that no-one mentions and that is Noteshelf. It's killer feature was Evernote sync, and when I had to use a Windows PC for work that was invaluable to me to get my notes on that platform.
Reactions: BigMcGuire
L

johnnytravels said:
It’s a good app, I wish however that the Mac version was a bit less clunky and not so obviously a Catalyst app (but it comes free with the iPad version).
Click to expand...

Thanks for this. I thought the Mac app cost extra.

When I try to download GoodNotes 5, [MBA, with Catalina 10.15.6], I see:
The current version requires OS X 12.0 or later, but you can download the last compatible version.

CalMin said:
There's also something about my writing in Notability - it's just smoother and more pen-like. That sounds minor, but somehow, they have really got the inking feel nice in Notability.
Click to expand...

Yep, this is huge for me. This allows me to focus on the lecture, work meeting, emptying my thoughts onto paper far better than something that doesn't feel like pen/paper as much.

It is difficult to explain to those who haven't used Notability but this is HUGE for me - and why I keep going back to Notability.
W

Not bad app, but ****** company - enforced paid upgrade to v5 despite of high price for v4

I wouldn't trust them a bit

Also, standard Notes already do same job and even better in some cases
K

I have a little off-topic question, but related to note-taking.
Anyone tried purchasing any kind of paper-like screen protector?

Any opinions or other recommendations?
Thanks!

khaledm87 said:
I have a little off-topic question, but related to note-taking.
Anyone tried purchasing any kind of paper-like screen protector?

Any opinions or other recommendations?
Thanks!
Click to expand...

I prefer icarez matte protectors for my iPad. Only way I’m able to use my Apple Pencil.
J

khaledm87 said:
I have a little off-topic question, but related to note-taking.
Anyone tried purchasing any kind of paper-like screen protector?

Any opinions or other recommendations?
Thanks!
Click to expand...

I am currently using this and it works really well for me: 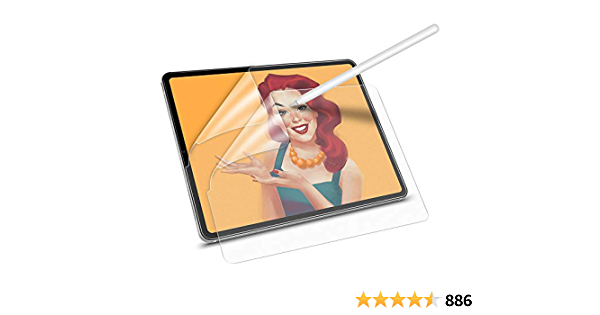 The best combination of a real matte screen and great Pencil friction I have found. Better than Paperlike, better than many others that reduce the screen’s clarity while actually adding glare to it.
Comes with a handy installation tool, too
Reactions: BigMcGuire
You must log in or register to reply here.
Share:
Facebook Twitter Reddit Email Share Link
Register on MacRumors! This sidebar will go away, and you'll see fewer ads.
Sign Up
Top Bottom